One of the tell-tale signs of the activated Vinyl Hunter-Gatherer is how their speed increases when they approach a Record Store. Up on the balls of their feet, there is a pronounced spring in the step as the shortest possible distance from here to the records is calculated with pinpoint precision. Breathing may be more rapid and shallower and there is often a narrowing of the eyes, a scanning of the nearby terrain to locate possible competitors. If someone suspicious is perceived, the pace will increase again. The imperative here is to be first to the treasure; to have first crack at the ‘New Arrivals’ section or simply to assert dominance by occupying the beginning of the alphabetically filed racks of albums.

So it was in the middle of last year when I arrived at Quality Records… Plus, one of my favourite vinyl haunts. A chap I recognised entered just behind me. I smiled and nodded as I laid claim to the A-D section, the smile of the territorial victor. There may well have been a hint of lingering smugness when I glanced up a few minutes later, empty handed but still enjoying my dominance of the space. The other Hunter-Gatherer was not, however, empty handed. No indeed. In fact he was grinning from ear to ear has he clutched a copy of the recently re-issued box set extravaganza of Warrior on the Edge of Time by veteran British space-rockers Hawkwind.

Now honesty requires me to disclose that there is nothing whatsoever wrong with either my original copy of Warrior (on ATCO), nor the 2001 CD re-issue (Rock Fever) that added a couple of tasty bonus tracks. Even the vinyl to CD transfer I did myself in the late 90s sounds pretty damn good. Except that none of these are the original UK album with the gatefold sleeve. You are wondering whether this is plumbing new depths of collector-fetish obsession, I can tell. Probably, but wait and see. 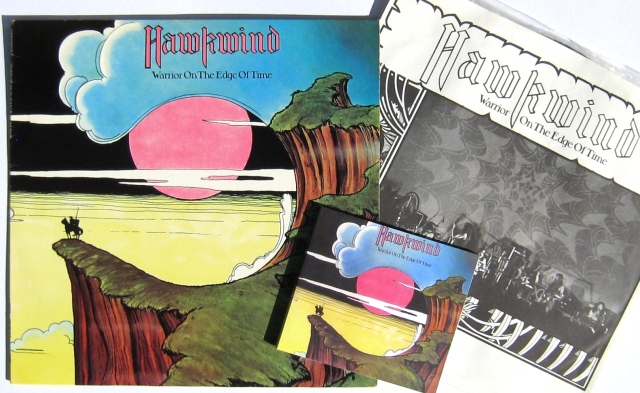 Simultaneously excited (maybe he won’t actually buy it) and crestfallen (of course he will; who wouldn’t?), I wandered over to the counter. Nope. He’s grinning like the proverbial cat with a bowl of cream. Deep breath. Quick karma readjustment. Gracious mode ‘ON’.

With a magnanimous nod somewhat undermined by a barely suppressed grin, he placed the box on the counter, stepped back and invited me to open it. Why not be generous? He was taking it home with him. 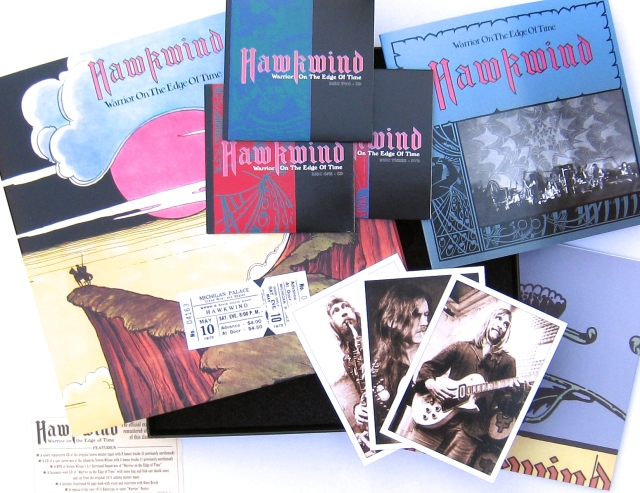 It certainly had all the bells and whistles: album, 2 CDs, a DVD, booklet, other bits and bobs. But what I really wanted to see was the facsimile of the original cover, a packaging extravagance that saw the gatefold sleeve open up into a four-square canvas. It’s a wonderful piece of fantasy art and design by Comte Pierre D’Auvergne and Eddie Brash. The original panel showed the titular Warrior sitting astride his warhorse at the edge of a grassy cliff, a pale dying sun behind him as he ponders the precipice between past and future. But open up the sleeve to the full four panels and the perspective changes entirely. 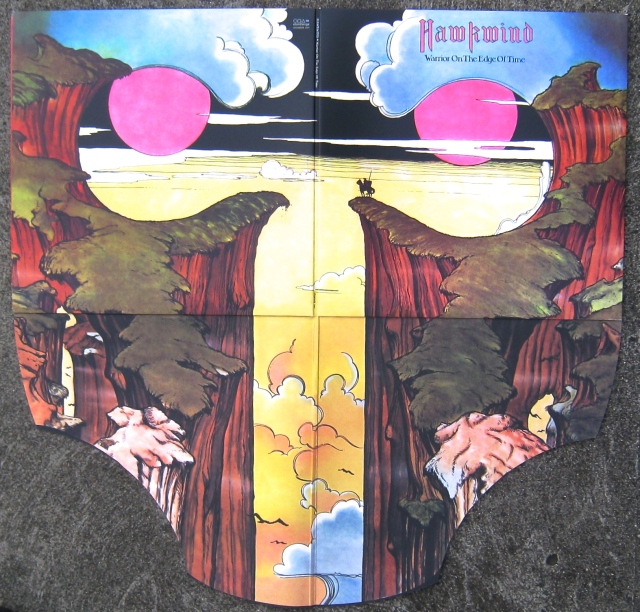 Now the horseman is dwarfed by the bottomless chasm at his feet. The ledge across the void is an eternity away while the malevolent frowning face formed by twin pink suns with heavy-browed clouds reduce the Warrior to an insignificant dot. In their book Beyond and Before: Progressive Rock since the 1960s, Paul Hegarty and Martin Halliwell go so far as to suggest another ‘illusion’ in the complete tableau, the ‘broad central shaft of yellow light’ being ‘a phallic image, with the void hinting at a masculine potency not yet diminished in this bewildering cosmos’ (p.100).

All of this might seem a little far-fetched until one learns that legendary British science-fiction writer Michael Moorcock was a mate of Dave Brock (Hawkwind founder) and contributed substantially to Warrior on the Edge of Time. In the re-issue booklet, Dave recalls:

‘Michael always had lots of plot ideas around in his desk drawers, and it must have been whilst we were talking about one of these that led on to us doing Warrior on the Edge of Time’.

Research suggests that the connections were not quite as loose as Dave Brock’s fuzzy remembrance, but more of that later.

Although the album concept is more a cluster of ideas than a straight narrative, there are links to themes Moorcock was exploring in his writings of the time. One of these was the idea of The Eternal Champion who has a pivotal role in the eternal struggle between order and chaos. A champion stirs in third track ‘The Wizard Blew his Horn’, Michael Moorcock providing the vocals. And there is the inside of the four-panel cover; a Warrior taking a stand against Chaos will need a shield. 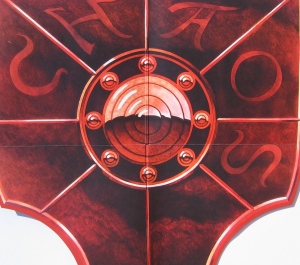 Another connection is with Moorcock’s trilogy The Dancers at the End of Time (1972 – 1976) where a moral 19th Century woman, Mrs Amelia Underwood, challenges the decadent immorality of a small indolent society millions of years into Earth’s future. Something of this theme is captured in the track ‘Standing at the Edge’ where Moorcock declaims ‘We are the soldiers at the edge of time and we are tired of making love’. In addition to the resonances in the songs and stories, there is a more prosaic connection: Mr Moorcock felt his Hawkwind affiliation strongly enough to dedicate the first book of the trilogy to the band. 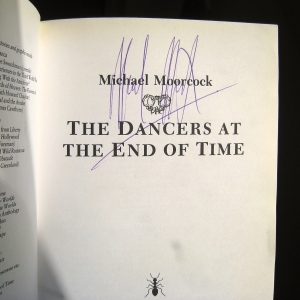 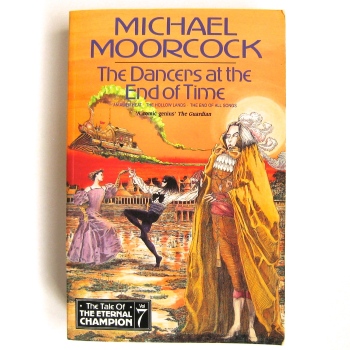 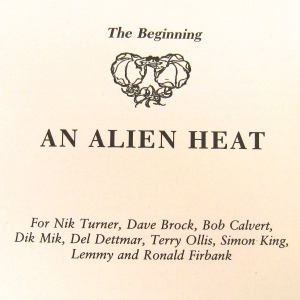 So far we have considered the literary connections and the album packaging, but what of the music?

Released in May 1975, Warrior in the Edge of Time was Hawkwind’s sixth album. For many fans it is perhaps the most well-defined expression of their science-fantasy space themes and inventive music. Opening with Lemmy’s ascending bass line and Simon House’s mellotron, ‘Assault & Battery Part 1’ introduces us to the themes which follow. It is, in fact, revealed in the opening couplet – borrowed from 19th C American poet Henry Wadsworth Longfellow – and its musical accompaniment.

Lives of great men all remind us
We may make our lives sublime
And departing leave behind us
Footprints in the sands of time.

The song flows straight into ‘The Golden Void Part II’, a rich and romantic synth-driven piece that will be devoured by lovers of analogue synthesisers.

‘The Wizard Blew his Horn’ is the first of the poems declaimed by Michael Moorcock, his treated voice sounding unsettling and rather threatening. It segues into the instrumental ‘Opa-Loka’ by Alan Powell and Simon King, an album highlight evoking the hypnotically repetitive grooves Harmonia were making in Germany around this time. By contrast, the acoustic guitar and almost folky feel of ‘The Demented Man’ has a melancholy underpinned by mellotron washes and the keening of seagulls. It is an evocative and reflective end to Side One.

Another 19th century poet is employed for the lyric of Side Two opener ‘Magnu’. This time it’s Percy Bysshe Shelly, whose ‘Hymn of Apollo’ has this third stanza:

The sunbeams are my shafts, with which I kill
Deceit, that loves the night and fears the day;
All men who do or even imagine ill
Fly me, and from the glory of my ray
Good minds and open actions take new might,
Until diminished by the reign of Night.

In the Hawkwind song it becomes:

Deceit that fears the light of day
Fly from the glory of my ray
Good minds open and take new light
Until we diminish by the reign of night.

After another Moorcock piece, this time spoken by Nik Turner, comes the second instrumental ‘Spiral Galaxy 28948’, another brilliantly spacey synth-driven piece with cascading flute. The final Moorcock poem is followed by ‘Dying Seas’, a Nik Turner song that continues the mythical explorations before fading out, somewhat unexpectedly given the careful segues of previous transitions. But after the pause, in crashes Dave Brock’s ‘Kings of Speed’, a classic Hawkwind belter (with a Moorcock lyric) to race us through to an exhilarating conclusion.

Warrior on the Edge of Time is romantic, progressive, grooving, swirling space rock at its best and without doubt one of the jewels in the Hawkwind catalogue.

Perceptive readers might well have worked out that I did acquire my own copy of the just-missed box-set, courtesy of a generous birthday endowment. To be brutally honest, like many lavish re-issues it is mostly frippery. Do you need the postcards or the facsimile concert ticket? Of course not. Will you blu-tack the poster to your bedroom wall? Not unless your mum gives permission. Disappointingly, the DVD is not a contemporaneous concert (though there is some live material on CD2) but further mixes by Steven Wilson. The booklet is nice, though Dave Brock’s contribution adds little to our knowledge of the album or its recording. And the pages all fell out on first reading which does not exactly trumpet ‘champion quality’. So though winning the ‘Bling’ award for expensive and needless extravagance, the core component remains the vinyl record and that is wonderful. 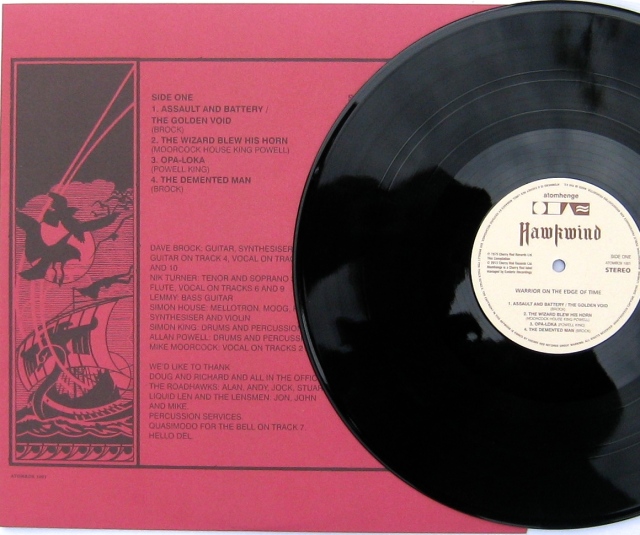 Michael Moorcock ‘The Dancers at the End of Time’ [Millennium Books, London, 1993]

Paul Hegarty & Martin Halliwell ‘Beyond and Before: Progressive Rock since the 1960s’ [Continuum, London, 2011]

← OFF THE WATER, BACK TO LAND
VINYL HUNTER GATHERER’S SUMMER HOLIDAY →
Join 3,595 other followers