BUSTLING TOWARD THE HEDGEROW: LED ZEPPELIN I – III

Led Zeppelin played their first gig on the 7th of September, 1968, in Denmark. The tour was a remaindered Yardbirds commitment but none-the-less a statement of intent for a new/old band with energy, commitment and stamina. They played regularly, often two sets per night, and set off on the first of many visits to the USA over Christmas of that year.

Full of nice tastes and ideas that actually work, the album is very well done. …a new and expectedly exciting group (sic).

On 31st March of 1969 they were playing at the Cooks Ferry Inn in London. An eyewitness recalls:

I was there in my granddad vest and Dunlop Green Flash plimsoles, cool or what? I sat right at the front with my feet resting on the stage, Jimmy Page standing in front of me playing his nuts off and sweating profusely. How excited was I as sweat dropped from his head onto my Dunlops! This was a Monday night, as were most Cooks Ferry gigs at the time, and the noise was unbelievable, my ears didn’t stop ringing until Thursday morning. [Courtesy of the Led Zeppelin website. The timeline is fascinating.]

The band toured, then toured some more. Success, power, adrenalin and endless diversions followed: the tales of debauchery and decadence are legion. Read about it (if you dare) in tour manager Richie Cole’s memoir, “Stairway to Heaven: Led Zeppelin Uncensored”.

A second album duly burst forth in October ‘69 while the band were touring the US (again). By this stage a gulf had opened up between American critics and the concert going, record buying public. The official Zeppelin site reminds us that “on December 27th, 1969, Led Zeppelin II reaches number 1 on Billboard, displacing Abbey Road”.

Until you’ve listened to the album 800 times, as I have, it seems as if it’s just one especially heavy song extended over the space of two whole sides. [RS, Dec 13, 1969]

As author Charles R. Cross notes in “Led Zeppelin: Shadows Taller Than Our Souls”, the signature US music magazine “felt that Zeppelin’s music was so derivative it could be comically dismissed.” [p. 28]

Despite the panning, the first two albums have achieved a certain historical gravitas with the passing decades that may or may not be deserved. One believer is Mr Foo Fighter, Dave Grohl:

Heavy metal would not exist without Led Zeppelin, and if it did, it would suck.  [Writing for Rolling Stone magazine. Article ‘updated’ 2011, retrieved May 2014] 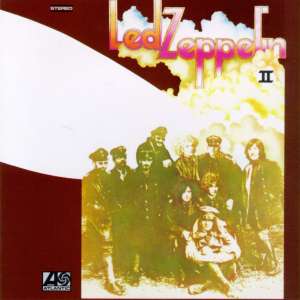 Whatever the artistic achievements, there is no doubting the work ethic of manager Peter Grant’s boys: “In 1969, Led Zeppelin played 139 shows, the vast majority of them in the US” [RS #657, Oct 2006].

After a few days off for Christmas the band was on the road again, playing shows in the UK and Europe before returning – like a comet orbiting a seething planet – to the US. It was a slog, and by the end they were knackered.

In the final days of the spring 1970 North American tour, all of us were exhausted. Too much travelling, too little sleep, too much alcohol, too many drugs. [Cole, p. 143]

The omission of one particular diversion suggests that Mr Cole does not attribute a surfeit of sex to in-the-red fatigue levels. Guess they were young and strong. But Robert Plant’s larynx was not so robust; he lost his voice. Taking a break from intimidating promoters, Peter Grant gave full rein to his compassionate nature. Or perhaps his long-term investment savvy. Anyway, Richie Cole records that,

Peter stepped in and took control of the situation. “That’s it, Robert,” he said. “There will be no show tonight. You’ve sung twenty-nine concerts in thirty-one days. The doctor says that if you sing without a long rest, you could ruin your voice permanently… We’re going home.” [ibid, p. 144]

Arriving back in the UK in April 1970, the four members of Led Zeppelin touched base with family, friends, and massively engorged bank accounts.

But Robert was restless. Ill at ease. Unused to being in the same place more than a day, perhaps. He told Richie Cole that he and girlfriend Maureen were ‘fighting’. Unused to the same partner for more than a night, perhaps. The singer decided a change of scenery was in order. Recalling a cottage where he had spent an enjoyable childhood holiday, Robert called Jimmy Page to suggest a sojourn in Wales.

Although the record company was already breathing down their necks about the next album, Plant and Page were not worried. Some songs, such as “Immigrant Song”, were already well advanced and despite being road-weary, they were full of ideas. Robert Plant’s interest in history and mythology was starting to permeate his ideas for lyrics while Jimmy Page’s ears had always been quietly attuned to acoustic and folk influences, not just the blues. What better preparation for some time in the wild lonely Welsh hills?

Plant and Page brought their partners with them, along with a couple of roadies to look after the domestic tasks. No small job, in a building without electricity. Still, as Clive Coulson told Mojo magazine, “Everyone mucked in really. I wouldn’t take any of that superior shit. They were wonderful people to work for, normal blokes.” [Mojo #77]

Rambles were undertaken, lyrics written, tunes conjured from the countryside or excavated from memory. Dogs were walked, babies conceived (well, one, anyway) and a genuine song-writing partnership sprouted.

After further wood-shedding with John Paul Jones and John Bonham at draughty Headly Grange in Hampshire, the band went into the studio then – inevitably – back on the road.

With its images of barbarous Norse seamen and pillaged abbeys, (it) was the first of Led Zeppelin’s many hammer-of-the-gods threnodies. [p.117]

Electric blues and high energy rockin’ dominate the remainder of the side. But it is the second side of Led Zeppelin III that really changed the game. Here the complimentary interests of Plant and Page in English folk burst forth with side opener “Gallows Pole” (Trad. Arr. J. Page & R. Plant) setting the tone. Wistful ballad “Tangerine” is followed by the yearning vulnerability of “That’s the way”, their most emotionally complex song to date. “Bron-Y-Aur Stomp” is aptly described by Allmusic as “an infectious acoustic romp” before the album closes with the Beefheart-esque wonkiness of “Hats off to (Roy) Harper”.

In a Mojo article, writer Phil Sutcliffe quotes Robert Plant as identifying Led Zeppelin III as “our single most important achievement”; this was in the 90s, not amidst the hype and propaganda of the album’s original release. At the time opinion was divided, of course, with some noting the ‘bombast’ while others complained about Zepp going ‘soft’. But Robert knew from the beginning that III was special.

Now we’ve done Zeppelin III the sky’s the limit. It shows we can change. It means there are endless possibilities and directions for us to go in. [quoted in Mojo #77, p. 62]

And they did just that. 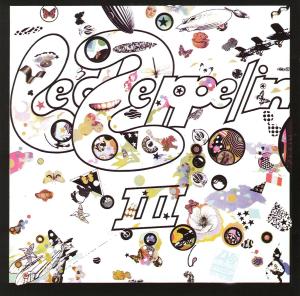 For this listener, it is the leavening of the swaggering take-no-prisoners sonic assault with some acoustic light and shade that makes III special. Incorporating ideas and colours from the fertile English folk-rock scene added a richness and variety that found fulfilment on the next album.

Who wanted to do “a Pentangle-type thing”?

We’ll also wonder about what music the lads may have been listening to on the bus or in the plane during those endless tours; those ideas that gave rise to the musical leaps which bound out of Led Zeppelin III’s grooves.