NOT SUCH A COOL YULE

The first half of 1977 was spent sitting in my room. It wasn’t locked; I just couldn’t find many reasons for leaving. Other than one friendly human being, companionship came in the form of books and records. The small but diverse vinyl collection included a selection of the popular progressive music of the day, some jazz, and a range of other stuff. There was also an ever-growing pile of fantasy and science-fiction paperbacks and the AD&D manuals.

There were so few signs of life that even my parents noticed.

This lead to my Father (who had met my Mother at the Gilbert and Sullivan society, just in passing) cajoling me into attending a play reading for the Moorabbin Theatre Group. It is with a sense of wonder that I recall this pivotal event, as it is one of a very small finite number of positive interventions that I can attribute to the man who was always Father, never Dad.

The play reading was quite fun. I learned during proceedings that it was actually a casting session for a pair of one-act plays they were planning to produce. Fair enough. I read a bit and day-dreamed about maybe helping with scenery or something. It was actually quite nice to be outside my room for a change.

When the Director rang the next day and asked me to play the male lead in a little play called “Poor John, Poor Jean” I found myself saying, “Yes.” It would be my first stage appearance since playing the title role in a Year 8 Speech Night theatrical extravaganza called “The Boy Who Wouldn’t Play Jesus” seven years previously. Why not?

Moorabbin Theatre Group prepared “Poor John, Poor Jean” – a twee little piece about two star-crossed lovers that would have made the Bard choke – and another nondescript play where I had a couple of lines. But two half-hour trifles does not constitute an evening’s entertainment. You need three one-act plays for a full meal. So the program was augmented and completed by the Adelphi Players, who added a different one-act play to each of the three nights of the run. This fascinating little troupe was the lovechild of Michael Mace, a passionate amateur theatre director who gathered about himself a very small group of actors he liked working with and put on tight well-drilled performances of interesting material. I’d never have whispered it, but they blew our little play off the stage every night.

For his next project, Michael had in mind a full-length play called ‘The Golden Pathway Annual” that plotted the life of a post-war British child from conception to manhood. Michael asked me to join Adelphi and the cast of this play. I’d get to play ten different characters (including a chicken) and, he promised, visit exciting places. We did, too. We played in an old folks home in leafy Brighton. We played the Wagga Wagga Civic Centre. We even entered the Moomba Drama Festival. It was great fun, especially the chicken part. 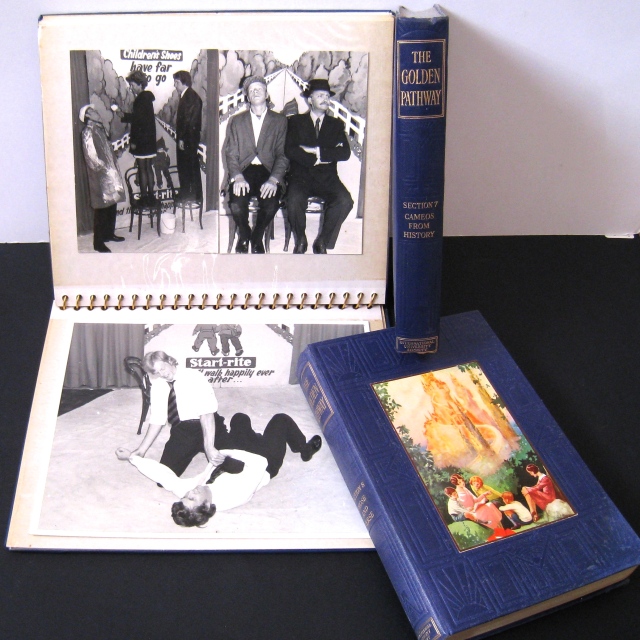 “The Golden Pathway Annual” (your correspondent on the left)

The Moomba Drama Festival was a lively competition for amateur theatre companies; I saw a few of the plays – they were good. But I didn’t bother going to the final awards night. I was knackered and went to bed. When Michael and theatrical colleague Digby knocked on my parent’s front door at eleven o’clock that Saturday night I needed to be roused and staggered out in my dressing gown to the startling news that I’d won something. I don’t remember what it was actually called; I always referred to it as the award “For someone who won’t be discouraged from acting so we better try to teach them some skills”. The prize was a year of part-time training at the National Theatre Drama School in St Kilda.

That was a great year, 1978; one where I began shedding the damp grey raiment of depression and started to explore the world outside LPs, paperbacks and Dungeons and Dragons. Of course I pursued those passions as well, but there was a little more actual living too.

At the end of the year I was uncertain about the future. Was it worth trying to further develop my acting skills? Could I sandpaper them into something that might actually earn me a living? It seemed a dubious prospect and by this stage I knew what it was like to live on the smell of a grease paint rag. My parents provided a roof and meals (in exchange for board) but little else. Things were tight in that pre-Christmas season of ‘78.

But if you actually engage with people, stuff happens. One of the drama group was a cheerful woman named Katy who managed a shop in an eastern suburbs retail precinct called Tunstall Square. I knew she sold women’s clothes so I was initially puzzled why I was being asked whether I wanted a job.

“Not a job selling clothes, silly. We want a Santa Claus for Tunstall Square!”

Even a week of work was too good to refuse, so despite horrifying images of vomiting children and endless Christmas mall-music I signed up.

There was no mall, it really was a square, and the kids were lovely. Only those young enough to truly believe were willing to climb on a stranger’s lap and whisper secret wishes into his acrylic beard. Hovering mothers (and the occasional father) smiled encouragement to their progeny and sympathy to me. Why sympathy? Because being an outdoor Santa in the Australian summer is no easy gig. I was young and slim in those days so padding was essential for the full-bodied Santa experience. And the suit was the complete felt regalia: no board shorts and thongs here cobber! I lost so much fluid that they had to shorten the daily shifts so I didn’t pass out. My sonorous morning ‘Ho Ho Ho’ became, by mid-afternoon, a hoarse desert whisper. And that is with a year of voice production classes under my wide black belt. Katy the shop manager brought me drinks and took the suit home at night for a quick rinse. That December week was so hot it was always dry next morning.

Santa staggered home, drained in every sense. But before collapsing into bed I’d slump in front of the stereo and listen to an LP. And what did I spin most often? Why, the recently released seasonal LP from Aussie jazz-man Don Burrows, Cool Yule.

Yep, not content with days of Santa summer sweat and the tinny strains of canned carols emanating from the shops, most nights I played a side of Christmas jazz at home. Dazed and drifting, I laid back on the swinging flute and jaunty clarinet of the Don, ably accompanied by George Golla on guitar and Tony Ansell on electric piano and synth. Cheerful, cheeky and even politely funky in places, it eased my tinsel-tousled mind. In all likelihood I was suffering from heat stroke. But you know what? It’s still my favourite Christmas record. So much so that after drawing a blank on You Tube, I resolved to remedy that lamentable absence and assembled my first ever music video. It has been uploaded for your Yuletide enjoyment.

God rest you merry gentlemen and women, let nothing you dismay.