YOU SCROOGE, YOU LOSE

Having had a crack at describing categories of record collectors (called Vinyl Hunter-Gatherers around these parts), this post continues looking at further case studies, your correspondent once again being the mandated patient. Sorry, that should read ‘volunteer’.

Enthusiast (B): ‘Excellent — a very satisfying find. Wonder if I can swing a discount’.

This double live album had been on my ‘want’ list for years.

After the monster that was Chicago IV —a four LP live album recorded at New York’s Carnegie hall— you’d think that enough was more than enough. But that quadruple album has a thin sound and performances that run hot and cold; it just wasn’t the grab-you-by-the-scruff-of-the-neck ‘in concert’ document that you’d hope for from a band whose surge of brass-driven rock-jazz creativity started in 1969 and, at this stage, showed little sign of tapering off. (It did, quite soon afterwards, but that’s another story). So when I heard about this Japan-only release, recorded the year after IV while the band was in the land of the rising sun, I was more than curious. Rare and good and live. That’s a combination to hit the Vinyl Connection sweet spot every time.

But I only ever saw it once, and it was prohibitively expensive so I passed. And guess what? I regretted not digging deeper into my pouch of Yen. Passed over now and regretted later — every record collector knows the story.

And so, a couple of Sunday’s ago while on a visit to an eastern suburbs den of vinylity, I saw it again. Yep, it was still expensive. Boo hiss, it had a significant scratch at the beginning of side four. The cover was excellent, clean and straight, though the OBI (those paper strips on Japanese pressings that collectors get so excited about) was missing. My response was not quite, ‘Big fucking deal, I’m buying it so there’, it was more furrowed brow and fretful wavering, but the result is what counts. And as everyone knows, you gotta listen through the surface noise, man.

Actually, after a good clean, the scratch isn’t too noticeable and the recording is terrific.

With each side of this double album clocking in between 24 and 26 minutes, there’s a lot of music. Side one is particularly strong, with the edgy punch and spirited blowing on ‘A hit by Varese’ being a highlight. That all but one song on this side are from the album Chicago V, still a month from release at the time of recording, says much about the band’s confidence in the material. 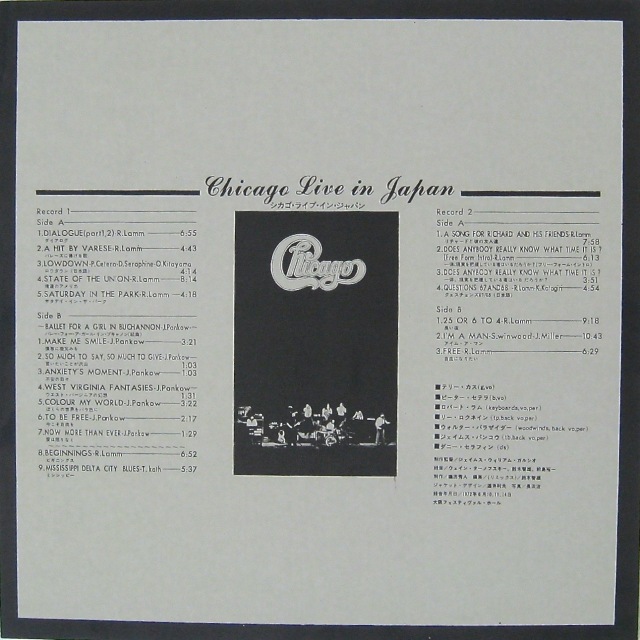 The second side is dominated by James Pankow’s ‘Ballet for a girl in Buchannon’ (Chicago II), a suite I enjoy for it’s varied patchwork of pieces. This is where the hit ‘Colour my world’ comes from, a pretty ballad that unfortunately indicated where the band would position itself by the mid-70s.

A couple of unreleased songs spice things up for attentive fans (Terry Kath’s ‘Mississippi delta city blues’ was a live favourite that later reappeared on Chicago XI; ‘A song for Richard and his friends’ appeared on IV) while devotees of the debut album (your correspondent amongst them) are well catered for with four songs, including Chicago’s boisterous encore version of the Spencer Davis hit, ‘I’m a man’. Chicago III, often ignored when the band’s early recordings are considered, contributes two songs (‘Lowdown’ and ‘Free’) and there is a barnstorming version of ‘25 or 6 to 4’ from the second album. It’s exciting ensemble playing full of energy and momentum, just what a live album should be. If you think of schmaltzy ballads when Chicago is mentioned, check out albums I, II and V, and grab this ripper rarity if you see it.

In sum, an excellent Category B acquisition, despite the scratch not resulting in a discount.

Desperado (G): ‘Not very interesting, possibly not very good, but I simply must take home something. Preferably several somethings’.

I like Phil Manzanera a lot. He’s appeared at VC before, and just recently I enthusiastically purchased an upgrade copy of the excellent Primitive Guitars. During a recent lunchtime record store trawl, I found myself clutching Wetton-Manzanera despite several clear indicators that I shouldn’t.

One: Phil’s 80s jacket on the front cover. Yuk. Poor taste in clothes = poor music, doesn’t it? At least, that’s the sense I make of that entire decade of pop music.

Two: John Wetton was much closer to the tragedy of Asia than his sterling work with King Crimson.

Three: The titles suggest a slew of mainstream boy-girl songs. Put this together with JW’s bleached blonde LA rock star look and it spells trouble.

On the plus side, Alan White is on drums and Kevin Godly on backing vocals.

Three votes against and one half-hearted vote in favour. I bought it of course.

You will not be surprised to hear that the album lived down to expectations. Pedestrian AOR with that brittle, two-dimensional production typical of aspiring radio-friendly rock in the second half of the 80s. To be honest I cannot find a highlight. Sadly, this one fits Category G perfectly.

Scrooge (H): ‘It’s cheap. Better buy it (even though I’ll only listen once then file for eternity)’.

Of course I grabbed this for fifty pence when it turned up in a Charity Shop dig in the UK not long back. I mean, it’s a solo album by Genesis keyboard maestro Tony Banks, isn’t it? With a clever title, too. Can’t be all bad, surely? Just look at the back cover photo.

Allmusic puts Bankstatement in three categories: Album rock, Contemporary Pop/Rock, Prog-rock (note hyphen). I’d proportion the musical content thusly: 20%, 75%, 5%. As a serious prog-head (note hyphen), this was a cheap but  unsatisfying purchase. I could, of course, listen a few more time and extract some highlights for you, but I’m not going to. 50p was too much. It is likely my time would have been better spent snoozing, as this purchase proved the record-collector adage, ‘You Scrooge, You Lose’. Another Category H record ready for filing.

If you have a category story to share, please do. It’ll help me feel more normal.

← EARTH AND MOON
FIELD TESTING THE THEORY →
Join 3,594 other followers