Naturally, there was a closing down sale. While un-tempted by appliances or transistor radios, I remember having my eye on one of the albums reclining in the slowly thinning racks of records. Over the course of a few weeks I’d um-ed and ah-ed. Not weeks of seven days of eight working hours each —my job at Bentleigh Electrics was Friday nights and Saturday mornings only— but a couple of my weeks. All right, I’ll be honest. I saw the triple LP album of Sunbury 1973, Australia’s biggest rock festival, wondered during the ensuing week whether I should grab it, and fronted up to work the following Friday toying with the idea of returning half my weekly earnings to the boss in exchange for the record. Let the tension over this momentous decision simmer quietly while I sketch out some context.

If you are a regular at Vinyl Connection, you may be wondering whether Bentleigh Electrics is the same shop as Max Rose Electronics, the emporium featured in several ‘Memoir with Music’ posts (including this one I’m quite fond of). It is indeed. Max sold the business that had provided him with a modest income for well over twenty years and moved into semi-retirement. I was included as part of the deal, my catalogue description boasting I knew most of the workings of the front-of-house and was good with customers, especially music buyers and those in search of a new steam iron. The continuation of my casual employment under the new management was thus assured. For the time being, at least.

The new management was, in this case, the feckless younger son of a wealthy industrialist who wanted to encourage his mid-twenties scion to man-up to the real world and learn about life… via a small retail Record and Electrical Goods shop in suburban Melbourne.

Young Timothy leapt into the role with all the energy of a middle-aged Persian cat and all the innovative verve of a friendly but rather dim labrador. I do not intend to be cruel —Tim was a nice enough chap and there was never significant friction between us— but his attitude to the shop reminded me of a bored kid in a playground, wandering over for a bit of a swing, perhaps a slide or two, then sitting on top of the monkey bars, swinging his legs and gazing into the sky. In a remarkably short time his skills had managed the business to a stand-still. In my imagination I see Father sighing with a combination of exasperation and resignation. ‘The shop must close, Timothy. It is no longer viable. I’m placing you in the office of the plastic extrusion factory where you will file paperwork. Under supervision.’

I still feel a little sad when I drive down Centre Road and see a shoe shop where Max Rose Electronics used to be.

Yes, this is Centre Road, Bentleigh. Exciting, isn’t it?

Back to the Friday evening in question. I think my uncertainty about purchasing this sprawling triple-album was three-fold. Firstly, it’s price —even discounted for the sale— was a substantial part of my measly income. I was back to being a student again and indisputably penniless. Remember those times when it was a major decision about whether you could afford a second coffee on a particular day? Thanks heavens I was living at home and Mum still made me a sandwich.

The second restraint was that I’d listened to some of the album and although the recording was fine for a live gig, much  of the music had that shambolic you-had-to-be-there vibe of many a three-day drug-fuelled summer festival. Or so I am reliably informed. Which leads to the third hesitation: I had not been at Sunbury in 1973 or in any other year, so it felt like a cheat to own the audio record. A bit false, like putting safety pins through an artfully torn t-shirt in 1984.

On that Friday night a long-haired fellow ambled into the shop and browsed. Holding The Great Australian Rock festival Sunbury 1973, he approached the counter and plonked it down. ‘I’ll grab this one,’ he said.

Now here is where it gets a bit interesting. During the ensuing conversation —he was a friendly bloke and up for a chat— it emerged that Steven (for such was his name) heard about the Closing Down Sale from my sister.

My younger sibling, deciding that finishing her interrupted high school education might be a helpful investment in the future, enrolled in an adult version of Year 12 at the TAFE college where Steven taught. Indeed, during conversations that I imagine were part of the more relaxed grown-up learning environment, Steven discovered that his student’s brother worked at Bentleigh Electrics. And that there was a sale on. Late night shopping brought him to Centre Road on that fateful evening.

I sighed inwardly and put his purchase in a bag.

As well as being a teacher, Steven was an avid record collector and a presenter on public radio station 3PBS. I tuned in to Satan Sounds a few times and found that his playlist, far from being demonic, had enough overlap with my own tastes at the time to imagine a kindred spirit. And so it eventuated that the brother’s relationship with Steven lasted longer than that of the sister student. Steven and I became mates, bonding over music and ultimately presenting a radio show together on 3PBS called ‘Late Night Shopping’.

When I was round at his place last night, he handed me a square paper bag. ‘For your birthday,’ he said. ‘Given your strange affection for live albums, it probably should always have been yours. Think of it as the return of a thirty-five year loan.’ 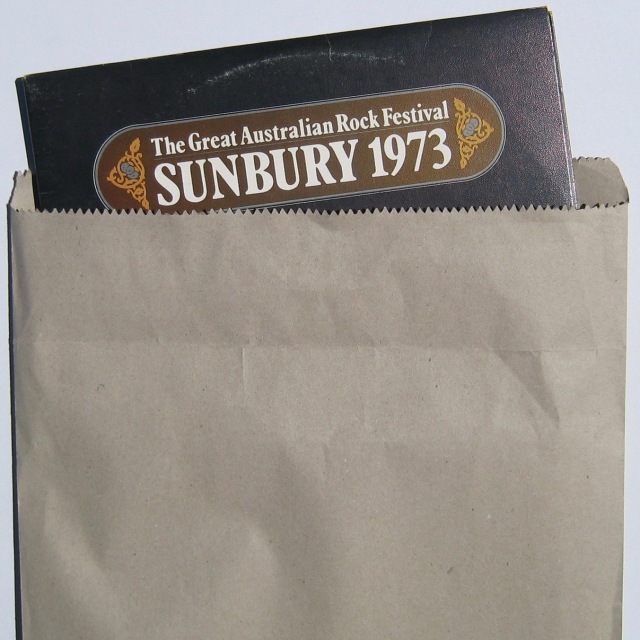