The year I undertook a part-time theatre/drama/acting course at the National Theatre Drama School was, without doubt, one of the best for quite a while*. Yet at the end of the year I was uncertain about the future. Was it worth trying to further develop my acting skills? Could I sandpaper them into something that might actually earn me a living? It seemed a dubious prospect and by this stage I knew what it was like to live on the smell of a greasepaint rag. My parents provided a roof and meals (in exchange for board) but little else. Things were tight in that pre-Christmas season of ‘78.

But if you actually engage with people, stuff happens. One of the drama group was a cheerful woman named Katy who managed a shop in an eastern suburbs retail precinct called Tunstall Square. I knew she sold women’s clothes so I was initially puzzled why I was being asked whether I wanted a job.

“Not a job selling clothes, silly. We want a Santa Claus for Tunstall Square!”

Even a week of work was too good to refuse, so despite horrifying images of vomiting children and endless Christmas mall-music I signed up.

There was no mall, it really was a square, and the kids were lovely. Only those young enough to truly believe were willing to climb on a stranger’s lap and whisper secret wishes into his acrylic beard. Hovering mothers (and the occasional father) smiled encouragement to their progeny and sympathy to me. Why sympathy? Because being an outdoor Santa in the Australian summer is no easy gig. I was young and slim in those days so padding was essential for the full-bodied Santa experience. And the suit was the complete felt regalia: no board shorts and thongs here cobber! I lost so much fluid that they had to shorten the daily shifts so I didn’t pass out. My sonorous morning ‘Ho Ho Ho’ became, by mid-afternoon, a hoarse desert whisper. And that is with a year of voice production classes under my wide black belt. Katy the shop manager brought me drinks and took the suit home at night for a quick rinse. That December week was so hot it was always dry next morning.

Santa staggered home, drained in every sense. But before collapsing into bed I’d slump in front of the stereo and listen to an LP. And what did I spin most often? Why, the recently released seasonal LP from Aussie jazz-man Don Burrows, Cool Yule. 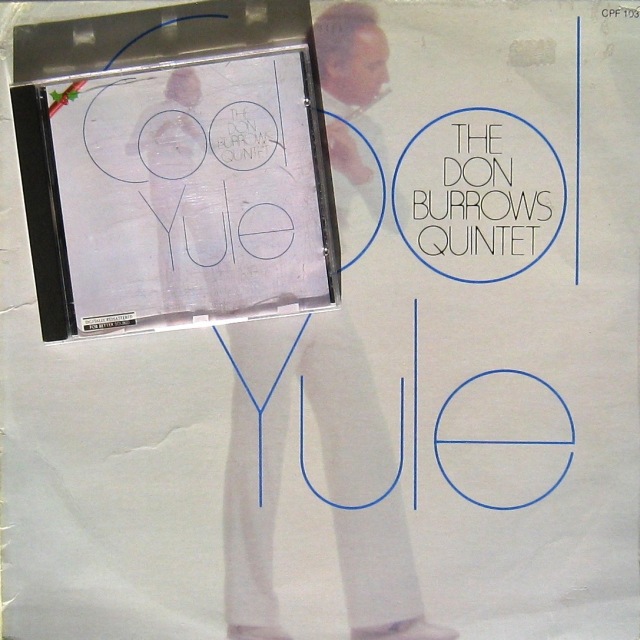 Yep, not content with days of Santa summer sweat and the tinny strains of canned carols emanating from the shops, most nights I played a side of Christmas jazz at home. Dazed and drifting, I laid back on the swinging flute and jaunty clarinet of the Don, ably accompanied by George Golla on guitar and Tony Ansell on electric piano and synth. Cheerful, cheeky and even politely funky in places, it eased my tinsel-tousled mind. In all likelihood I was suffering from heat stroke. But you know what? It’s still my favourite Christmas record. So much so that after drawing a blank on You Tube, I resolved to remedy that lamentable absence and made my first ever music video. It has been uploaded for your Yuletide enjoyment.

God rest you merry gentlemen and women, let nothing you dismay.

* This is an edited version of a post from about this time last year. The original has a longer pre-amble.