One of the albums featured in 10 Terrific Album Covers – Part 2 was Live MCMXCIII by The Velvet Underground. At the time I was a trifle dismissive.

Having the double CD did not deter me from snapping up this 4 LP live set on beautiful blue vinyl, apparently a ‘Black Friday’ release from 2014. Haven’t listened to it yet, but my memory of the album (from twelve long years ago) is that it is well played, nicely recorded but maybe a little pointless. The cover is a tasteful re-imagining of the original Warhol album sleeve that pleases rather than excites. A bit like the reunion.

But Live MCMXCIII is such a substantial set from such an iconic band that I decided it deserved more. Take the journey with me across eight sides of blue Velvet vinyl.

‘We’re Gonna Have a Real Good Time Together’. What an obvious yet excellent way to open a reunion concert celebrating the music of one of the 60s most iconic bands. A calling-on song, curtain-raiser, declaration of intent, invitation… all wrapped in a fast-paced good-time garage guitar melody. It’s easy to imagine being in the audience and turning to your companion and saying, ‘Aren’t you glad you came?’.

One of the relatively few pop songs about sadomasochism, Lou Reed delivers ‘Venus in Furs’ with quavery intensity, avoiding any temptation to camp it up or, worse, to whip in some irony. Something for uber-fans next, the live rarity ‘Guess I’m Falling in Love’, before Moe Tucker steps forward to sing ‘Afterhours’. The charmingly inadequate singing voice that was quite sweet in 1969 sounds rather less attractive almost 25 years later, but the crowd loves it and it is fair enough for Ms Tucker to get a moment in the spotlight.

John Cale is up next, delivering ‘All Tomorrow’s Parties’ with a languid fatalism that respectfully evokes Nico’s sonorous delivery. The under-stated jangly guitar work from Reed and Sterling Morrison works well too in this updating of the original minimalist accompaniment that somehow melded Byrds with Reich.

Despite it being so difficult to avoid uploading your memories of the original versions, this is a strong opening salvo.

‘Some Kinda Love’ has always been a favourite Velvets song, so at roughly twice the original length, this churning nine-minute version thrilled me. Think Creedence’s ‘Keep on Chooglin’’ and you’ll have the groove. During the long instrumental sections I found myself drifting back to the live double album 1969 and wondering whether the roman numeral title of this set referenced that early 70s release. I also wondered how come that rambling low-fi concert album had inferior sound but more immediacy than this polished 90s set. 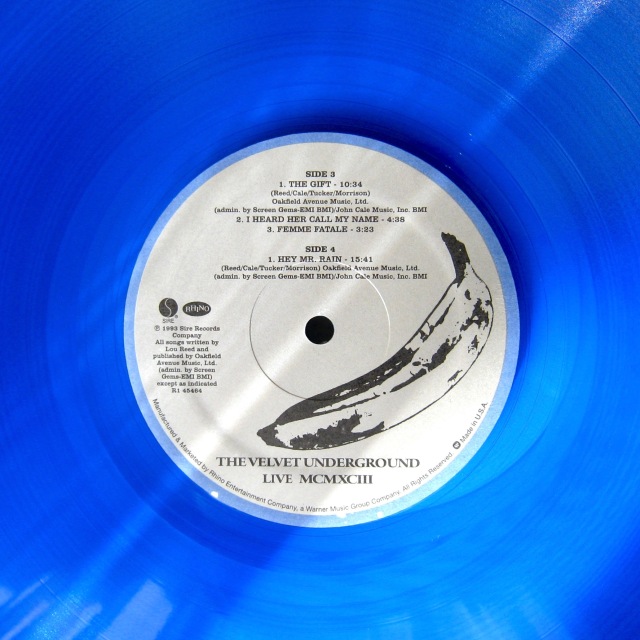 After the thrilling ‘White Light/White Heat’, the first side of the Velvet’s second album was dominated by Lou Reed’s college creative writing assignment ‘The Gift’ where-in young Waldo Jeffers posts himself to a girl he fancies. John Cale’s delicious Welsh tones deliver the macabre tale at the beginning of record two of Live MCMXCIII. Other than delight in his deadpan plum pudding recitation and respect for remembering the story word-perfect, I did not get much out of this. Didn’t back in the day either, to be honest, though the loping, underlying groove is mesmeric.

Snapping into another song from White Light/White Heat, Lou punches through ‘I Heard Her Call My Name’ with some great guitar squall. I reckon this is their nod to ‘Sister Ray’, noticeably absent from this 1993 release (though they did play it on the tour).

Cale returns for ‘Femme Fatale’. Hard to listen to this and not think of the original with its queasy lounge-jazz tone and Nico’s corpse-like delivery. That debut album was so vibrant and varied.

How do you choose songs for a re-union tour? The most popular? Best selling? In-band status/power considerations? Elvis Costello’s Wheel of Fortune in-concert song-picker is without doubt the cleverest idea, though other bands have used fan polls or social media. Or, of course, you could simply retire gracefully and not do it at all. Here’s a challenge: name a significant band that broke up and stayed broken up, never reforming, re-grouping, re-cording, resurrecting; one where all the original members are still alive.

‘Hey Mr. Rain’ was recorded in 1968 but not released during the original life of the Velvet Underground. It’s a very basic song with an unremarkable blues-template lyric invigorated by edgy viola from John Cale. Stretching ‘Hey Mr.Rain’ out to almost sixteen minutes (the whole of side four) is one of the more interesting re-imaginings on Live MCMXCIII. The pace is slightly faster and Moe Tucker’s bass drum beat more insistent. Meanwhile, the musical interplay between Reed and Cale builds tension and drama, not unlike that between the players. The vocals come in late and briefly, suggesting that Lou and John chose this piece (at Cale’s insistence?) to inject some improvisation and sonic danger into proceedings. The sawing, abrasive interchanges between viola and guitar are far from easy on the ear —at times it’s like sandpaper on sheet-metal— but this is my favourite section of the entire concert. Here is risk-taking, here are the musicians saying ‘Fuck you, this is what we do’, just like the original band.

Back in Hits-land. ‘Sweet Jane’, ‘White Light/White Heat’, crowd singing along. Nice to hear the original bridge in ‘Sweet Jane’. Next, another Moe/band vocal spot, the awfulness of which is not even remotely covered by nostalgia. The brief ‘Velvet Nursery Rhyme’ that introduces the band is totally corny but kinda nice. Actually, it’s not really nice. It’s rubbish. Back in the audience, you turn to your companion and wonder, ‘Why did we bother?’ If side four offered a shot of what the concert could have been, this side suggests an opportunistic superannuation-building complacency all too often characteristic of such endeavours. Remember the Rick Nelson song, ‘Garden Party’? It included the telling lines:

If you gotta play at garden parties, I wish you a lotta luck

But if memories were all I sang, I rather drive a truck

Maybe I should have taken a break after ‘Hey Mr. Rain’.

Photo of VU bootleg Live CD sourced from the net

The edgy atonality of ‘Black Angel’s Death Song’ survives the smoothing of years pretty damn well, thanks again to the ululating screech of Cale’s viola. God that first VU album was confronting.

Back on safer ground with the classic ‘Rock ’n’ Roll’, one of only two songs from the post-Cale album Loaded. Nice enough guitar part in a traditional rock concert moment as Lou and the band push the excitement up. The side’s last song, ‘I Can’t Stand It’, is another VU fave, delivered here with pleasing gusto.

By the time I saw Lou Reed live in Melbourne in the mid-70s he had dropped ‘Heroin’ from his stage repertoire. But I remember sitting in the dark of my room with the Rock ’n’ Roll Animal version of the song sending its raging despair and self-destructive desperation straight at my head. Or was it my heart? As the rush builds through this version, it is Cale’s screaming strings that drive this into ‘something special’ territory. It could have been sad and comfortable, but Cale goads Reed, who really fucking pounds the last verses. Against my will, almost, I’m dragged along, cast backwards, filled with excitement and tears. So much for that safe critical nostalgic distance.

Is it the now or the then that has moved me? The song or its personal resonance? Does it matter? Of course it is potent for me, just as your music memories are rich and precious to you, but that’s the thing isn’t it? Ultimately, it’s all personal. Suddenly, astonishingly, I’m actually looking forward to hearing ‘Pale Blue Eyes’ on the epic eighth side of Live MCMXCIII. But first I’ll revisit the plaintive longing of the original (from the third VU album).

The Velvet Underground and Nico, with friend (1967)

An almost vulnerable reading of this simple, pretty song is given a chamber-folk feel by the addition of viola. When Lou messes around with the phrasing and intonation of one of his well-known songs, I reckon he’s communicating that he is singing it now, for real, not simply going through the motions. I like him for that, even though he’s certainly no jazz singer.

Oddly, the last song on side eight is a new one, a Reed/Cale collaboration called ‘Coyote’. It’s fine, though I’d have liked a stronger closer. Like the strident ‘What Goes On’ or a punked up ‘Run Run Run’ from the debut. 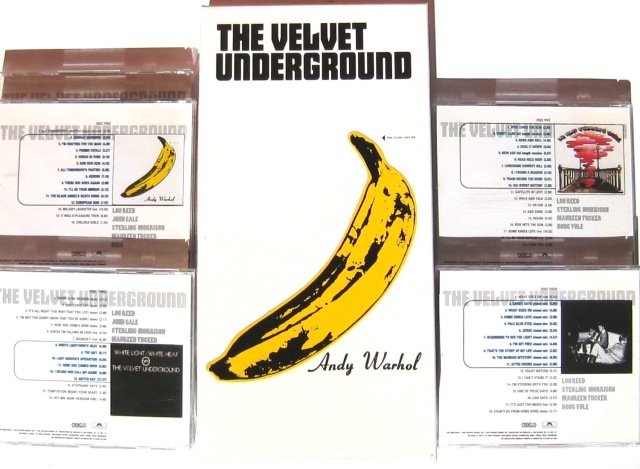 In addition to the ‘feature album’, this post also dipped into the five-CD box Peel Slowly And See [Polydor, 1995], a thorough and revealing document that fills in lots of gaps. It’s an excellent set and is highly recommended for those off and running with their VU explorations.

Sourcing the 2014 4LP blue vinyl set might be costly, though both the double CD and the précis one-CD version (same cover, but purple instead of blue) are around.

But really, why would you seek these out unless you already know and love all the originals? And if you know and love the originals, does this excellent VU tribute band deliver enough to satisfy? Perhaps ‘strong personal connection’ is just a fancy phrase for nostalgia; sometimes it may be enough to enjoy the view through renovated windows even if the countryside does seem subtly altered by time. Or perhaps by the azure-tinted glasses.