If you are a music fan over a certain age who likes to know stuff, chances are you have a few kilograms of rock reference books. There’s the large format, glossy-pictured one given to you on some forgotten birthday by a well-meaning family member that looks great but has not one solitary bit of information you don’t already know. There’s another that looked really interesting during a quick browse in the bookshop, but when you settled down to actually read it, the descriptions and ratings were clearly written by some cloth-eared pseudo-journalist who wouldn’t know his Traffic from his Triumvirat. Then there’ll be the book that, in the pre-internet age, used to be your go-to source for dispute resolution and curiosity cleansing.

For this fact-loving music nerd, that reference was Terry Hounsome’s Rock Record. 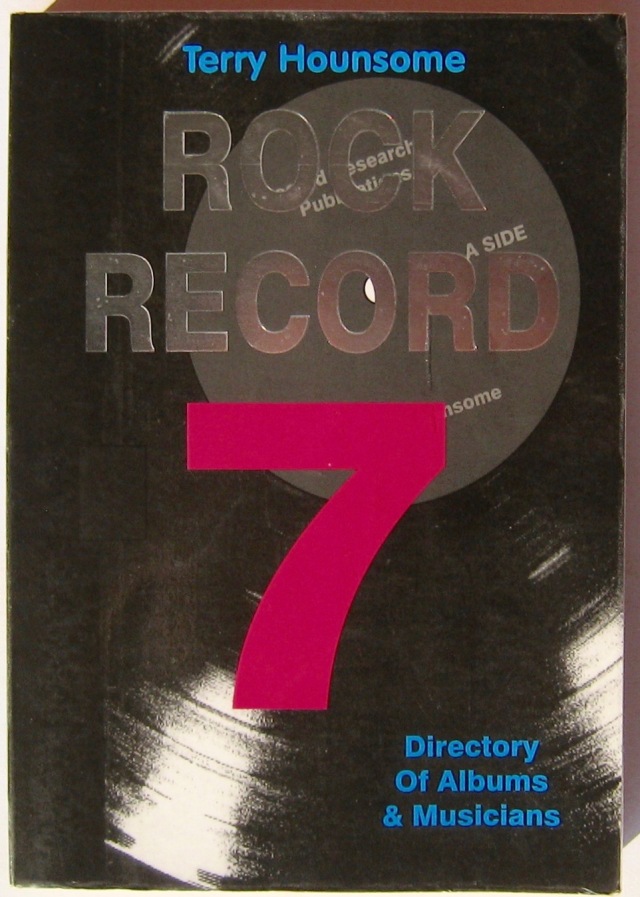 Well do I remember the excitement attending some correspondence with Mr Hounsome during my time in Germany. It was 1997 and the latest Rock Record was newly published; I was dead keen to get my hands on the warm-out-of-the-oven 7th edition. A volume truly deserving of the appellation ‘reference’, RR contains no opinions or editorialising, no photos or lists; just the facts, ma’am. We get alphabetical artists, chronological albums (with catalogue number), a list of musicians with codes for instruments and which records they played on, and that’s it.

Want to know whether Iron Horse released more albums than Ironhorse? Hounsome has the answer (it was the latter, 2:1). Need to resolve who played guitar on The Rutles album? Terry can tell ya (it was Ollie Halsall).

One of the most useful (if cumbersome) features of RR7 was the index, where each musician credited on every one of the hundred-thousand plus releases appears with a list of all the albums they are on. It provided hours of page-flicking fun following the career and appearances of a particular artist. Got all the Black Sabbath and Ozzy Osbourne albums? What about the Coven LP he played on? This book fed a hundred thousand record collector dreams and completist’s nightmares. 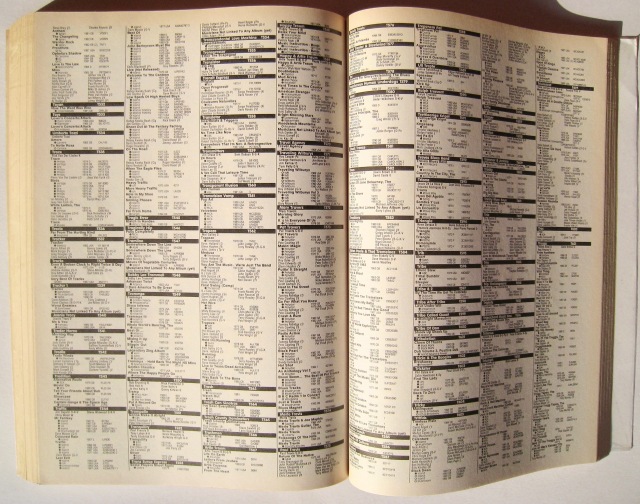 I remember being both excited and crestfallen when I looked up Steve Winwood in RR7 and found that there was still a long way to go until I had his entire recorded output nailed; there were forty-four listings. In fact, Mr Hounsome was an aid to retaining my record-collecting sanity (such as it is) as I realised, looking up I57 in the body of the book, that I really did not need Haile I Hymn by I Jahman (Island 1978) and that, tempting as it was, Will Powers Dancing for Mental Health should not necessarily be top of my ‘wants’ list*.

It would be unfairly diminishing of both Steve Winwood and his colleague Stomu Yamashta to describe the GO project as simply an appearance. Japanese percussionist and composer Yamashta gathered a stellar group of musicians to perform on his 1976 concept album, which was recorded at Winwood’s newly built home studio. Visiting Steve at his home office were German synthesiser pioneer Klaus Schulze, hot jazz-fusion guitarist and Return to Forever member Al DiMeola and ex-Santana drummer Michael Shrieve. Quite a line-up. 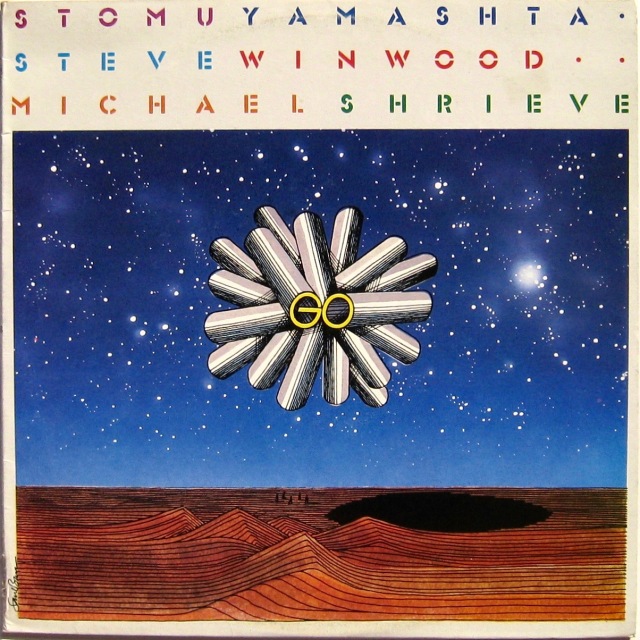 It is quite a record too. Lots of spacey analogue synthesisers and cosmic melodies, but anchored by strong songs, sung by Steve. In fact the stand-out track, ‘Winner/Loser’ was a Winwood composition. I love this album. I enjoy its variety, where a mysterious synth wash morphs into a funky strut bursting with percussion and a pulsing Rosko Gee bass line, followed by something that sounds like a wonderful amalgam of Caravanserai era Santana and Return to Forever. It’s just fabulous surfing these waves of music, as they segue into each other on rich currents of sound and melody. Winwood-wise, his singing is top drawer: passionate and committed. Add in a fascinating cover painting by Saul Bass (who popped up here) and you have something of an overlooked gem. GO really is a treat and comes recommended for its unique combination of musicians and music.

The recording must have been a creative and convivial time, as Stomu Yamastha managed to sell the idea of a tour of the album. This resulted in the live album Go Live From Paris, which is terrific too, with vibrant playing that follows the studio recording pretty closely. Standout track is the live version of ‘Crossing the line’ with a fine Winwood vocal followed by an absolutely shredding DiMeola guitar solo. I even have a bootleg CD of a different live performance, one of the bundle acquired in Mainz in exchange for a tower of plastic jewel cases.^ 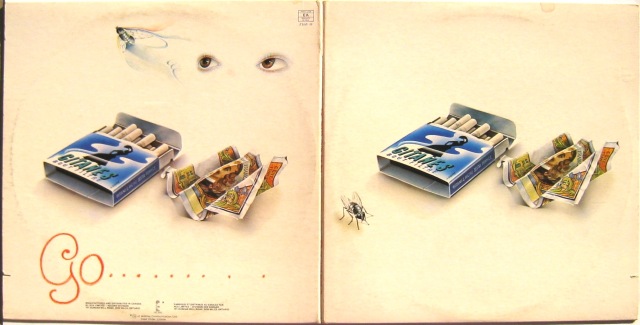 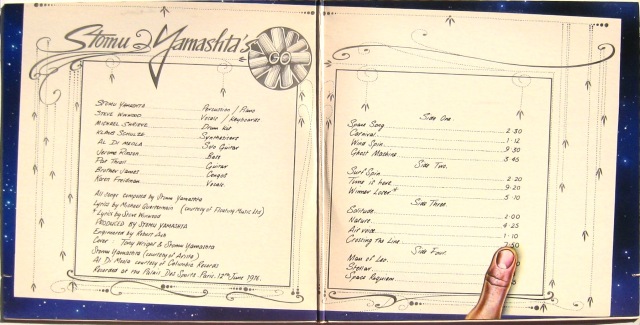 Record companies get twitchy when an artist takes a break. ‘You gotta get an album out, you owe it to the people’ as Roger Waters sang. And so it was with Steve Winwood. But without the experience of Stomu Yamastha’s GO, the first solo album might never have happened.

I prefer to work by myself if I can… Before Go I lacked the confidence to make a solo album. I had a lot of material ready but couldn’t force myself any further. [Welsh, p.133]

Released on Island in 1977, the first, self-titled Steve Winwood album is often overlooked or even totally forgotten. Recorded with long-time Traffic collaborator Jim Capaldi and a small band of studio musicians, Steve Winwood consists of six songs, four of which were co-writes with Capaldi and one with Viv Stanshall. The remaining song, ‘Midland maniac’ is notable for being entirely composed, performed and recorded by the artist. It sounds like a demo for Arc of a Diver, complete with inviting melody and the trade-mark plaintive vocal. It’s also quite revealing of Winwood’s state of mind at the time:

Where can I go

Except for the show?

And sometime from now – and it won’t be long 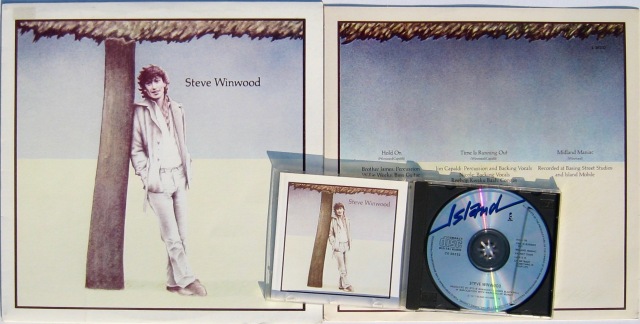 As for other songs on the album, opener ‘Hold on’ is the most likely to appear on a compilation —a mid-placed ballad with deft synth work, a nice little guitar break and a catchy chorus. I also like the soul-funk ‘Time is running out’ and the African flavours late in ‘Vacant chair’. Final song ‘Let me make something in your life’ provides a yearning, melancholic closer. If there is one general criticism, it is the extended nature of many of the pieces. The groove is there, yet interest sometimes flags; judicious editing might have tightened things up a little.

Although a consistently enjoyable album, success was modest for Winwood’s first solo outing. Nevertheless it gave him confidence to dive further into his own musical ideas, while his studio gave him space to work at low cost and his own pace. So as his short-lived marriage slowly collapsed around him, Winwood repaired to his country studio and immersed himself in the one-man album that would revitalise his career.

THIS is the third instalment in the Steve Winwood series. Here are the first and second.

Welsh, Chris, with Steve Winwood (1989) Keep on running – The Steve Winwood Story Omnibus Press, London.  [I would love to be able to recommend this bio, but I cannot. Despite the subject’s journey being rich and fascinating and Welsh being a fine writer, it manages to be so dreary as to induce slumber. Someone should have another go.~]

* Of course, if I saw an album called Dancing for Mental Health, I would buy it instantly, frame it, and put it in my office. So I don’t really know who I’m trying to kid here. Maybe Ms Connection.