I first encountered Steve Khan’s name in the credits for other artists… Steely Dan, Michael Franks, The Brecker Brothers… this was clearly an in-demand guitarist of great talent. So when I found the first album under his own name, it was not at all difficult to take a punt. Opening with the bouncy, smile-making ‘Some Punk Funk’ (listen here), Tightrope is a hugely enjoyable entrée into the world of jazz-rock fusion. This and the next two albums—all boasting fabulous covers by Folon—are some of my favourite LPs in this genre, and if the second and third are just a bit more confident than this debut, that shouldn’t dissuade anyone from walking Tightrope to a safe home in their collection.

Jazz-rock in the UK is a different beast to the US variety. Here, Brand X explore moods and structures as well as chops and grooves. Titles and cover notes display a peculiarly British humour—the album title is supposed to suggest their second album is ‘more rock and roll’—but it’s not really, despite the brilliant rhythm section of Percy Jones and Phil Collins. There are Indian touches, some gently funky bits, exploratory soundscapes of a progressive hue… and great playing throughout. Consider ‘Disco suicide’ here. Entertaining and engrossing.

In probably the first appearance by a Finnish musician in these pages, please welcome Mr Jussi Pekka Pohjola. Part of the progressive band Wigwam, Pekka was also bass player for Mike Oldfield for a period in the 70s (he’s on Oldfield’s excellent live album, Exposed) and produced his own brand of jazz-influenced progressive music with enchanting melodic touches and a sensibility quite different from the familiar UK-US axis. Mike Oldfield plays (very nicely) on this album—which, incidentally, was re-issued under his more famous name at one point—as does Gong percussionist Pierre Moerlen. Mike’s sister Sally contributes wordless vocals to a couple of pieces, making the whole thing rather a Virgin affair. Lots of musical variety in this friendly record. Check out the equations here.

7  Bill Bruford — Feels Good To Me 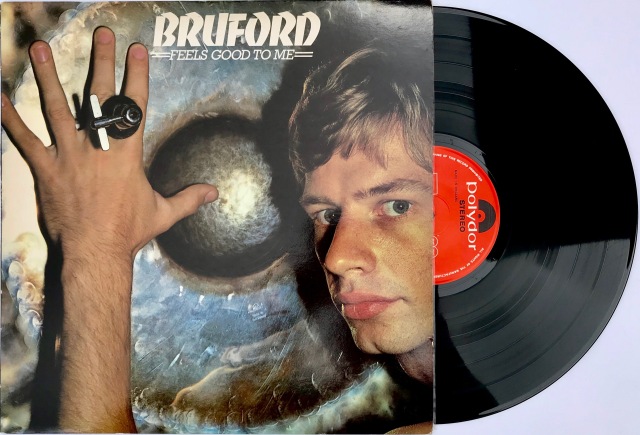 He entered at the ground floor of Yes, then after 4 ½ years, suddenly moved house to King Crimson at the invitation of Robert Fripp. After Fripp put KC on ice, he was far from idle. During 1975 and ’76, he played (in various capacities) with Genesis, National Health, Gong, Roy Harper and Rick Wakeman. So Bill Bruford’s first solo album was no stop-gap vanity project, but a major step in his development as the drummer’s drummer. The compositions (some Bill’s, some co-written with Canterbury keyboard legend Dave Stewart) are strong, inventive and very entertaining. It goes without saying that the playing is stellar. Allan Holdsworth provides sparkling guitar (as he did for Gong, UK, and others), Jeff Berlin’s bass is limber and sympathetic, occasional vocals by Annette Peacock add interest and variety, as does Kenny Wheeler’s flugelhorn. All in all, an outstanding jazz-rock album. Tackle the diabolical rhythms of ‘Beelzebub’ here. 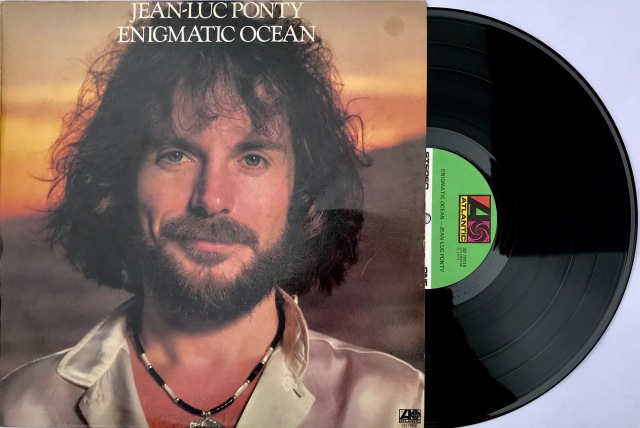 It’s an extensive catalogue, that of French violinist Jean-Luc Ponty. This album is from his jazz-rock peak; great tunes, exciting playing. The cast is stellar: Allan Holdsworth (again) delivers incendiary guitar, backed up by Genesis touring band member Daryl Stuermer, Aussie born Allan Zavod (ex-Zappa) is on keyboards and of course there is plenty of the electrified fiddle from the leader. The mid-paced ‘Mirage’ is a good sample, including a Ponty solo and a slinky synth section from Zavod. A particularly satisfying progressive jazz fusion LP, Enigmatic Ocean deserves to be mentioned in the same breath as Return to Forever’s classic Romantic Warrior. It also provides another verse in a eulogy for the wonderful and extraordinarily versatile Allan Holdsworth (6 August 1946 – 15 April 2017).