In 1974, Robert Fripp broke up the band he co-founded in late 1968, one of the most innovative and restless to achieve widespread success. King Crimson’s final release in this period was Red, arguably one of the band’s finest and most consistent and certainly one of my favourites.

The band was named Discipline.

In May, The Times newspaper gave a positive review of a performance by Discipline, noting that in addition to new material, the band performed pieces by the League of Gentlemen and King Crimson.

In a brief and somewhat circular statement in September 1981, Mr Fripp explained (after a fashion). “The musical movement of which King Crimson was a founding force,” he pontificated, “went tragically off course, and Crimson was the only group with the intelligence to withdraw when its usefulness was over.”

It sounds frightfully pretentious, but his argument was basically that the innovations and explorations made possible by incorporating elements of jazz, folk and composed music (so-called Classical) into rock had peaked, and little was to be gained by continuing along this flattened trajectory. Hence the lay off of King C, which Fripp amusingly refers to as an “interregnum”.

But the world had changed, punk had exploded then largely petered out, a decade had ticked over, fashions had got even worse… in sum, it was “a world very different from seven years ago”.

“There is,” Robert Fripp asserted, “useful work to do which requires a powerful instrument. And so King Crimson has returned to active service.” [Cover notes for the 2001 thirtieth anniversary re-issue]

Thus King Crimson was re-incarnated, with Fripp and Bruford being joined by Tony Levin (playing the devilishly demanding Chapman Stick as well as traditional bass) and Adrian Belew (guitar and vocals).

The name Discipline was retained as the album title, and on 22 September 1981 a very different King Crimson record hit the stores.

It was a shock, on first listen. Gone was the virtuoso soloing, gone were the dramatic swathes of sound. As I sat staring at the cover, it occurred to me that it was a striking representation of the music: a complicated yet beautiful interlocking mandala-knot on a blood-deep background.

Then, as I delved into the lyrics of the opening track, “Elephant Talk”, there was another surprise. Humour. On a King Crimson record!

I hadn’t noticed this immediately due to the shock of hearing an American voice singing out front of this most British of bands. Made even more confusing by the echoes of Talking Heads’ David Byrne in the delivery (and, for that matter, musically).

There is a frenetic energy to Discipline, but ordered. Disciplined. Flurries of well-drilled notes, dancing in complex concatenation with Bruford’s meticulous drumming.

They didn’t get on that well, Mr Fripp and Mr Bruford. The CD booklet (30th anniversary edition) includes an excerpt from Fripp’s diary wherein he fulminates (politely) about how to get the drummer’s drummer to play less. While in his autobiography, Bill refers to his erstwhile employer as “one part Joseph Stalin, one part Mahatma Gandhi, and one part the Marquis de Sade” (p, 147).

As I got more deeply into this deceptively direct music I could hear the influence of American minimalism. There is extensive use of fast-picked arpeggios, glinting and spinning like speeding star-knives. Glimpses of Philip Glass, of Terry Riley; a kind of intricate rock minimalism with a double-helix heartbeat of baffling velocity.

It is “a music of punctuation, circling and stasis that vies with detailed variation” (Hegarty and Halliwell, p.177).

Fripp had been listening to more than 20th Century composition. He became fascinated with the group sound of Javanese gamelan orchestras, and strove to get his quartet to capture something of the interlocking parts of that south-east Asian music, a communal rather than individual expression. The gap between this new music and mid-70s prog is now immense. This is a completely different kind of progression.

It’s not all phase-out-of-phase loops and electric power. “Matte Kudasai” is dreamily beautiful in the way Fleetwood Mac’s “Albatross” is beautiful. Sustained, whispering notes over a gently swaying rhythm…

She waits in the air

“The Sheltering Sky” on side two is also serene, mysterious, and gorgeous.

Don’t drift off in peaceful waters. “Indiscipline” lurches and charges like a psychotic rhinoceros, interrupted—aggravated, even—by Belew’s declaimed, almost hysterical vocal. Fascinatingly, this dense-spacious Rubic’s Cubism of a piece was performed often by the 2016 touring King Crimson, with the words being sung to an actual melody. Strange and unusual.

This is a dangerous place

Bill Bruford’s percussion is breathtaking. The whole is menacing.

I carried it around with me for days and days, playing little games, like not looking at it for a whole day, and then… looking at it, to see if I still liked it… I did!

I’ve been waiting fifteen years for a clean vinyl copy of Discipline to replace the one I surrendered for the first CD release. The official re-issue was on 15th June 2018. You can well believe I was quick to get the PayPal account ticking over.

It sounds fabulous, and looks great. The ‘knot’ is even embossed. Swoon.

Check your historical baggage if you can, and enter the world of Discipline. Prepare to be astounded.

The more I like an album, the longer it takes to write about it. This one took a long time.

Progressive rock is not a style. It’s an attitude, an approach to music. 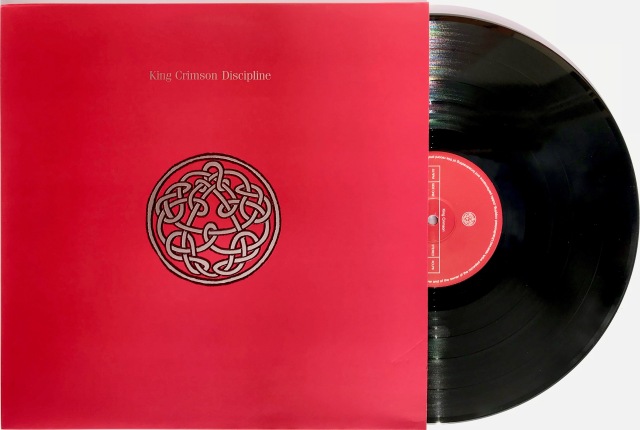 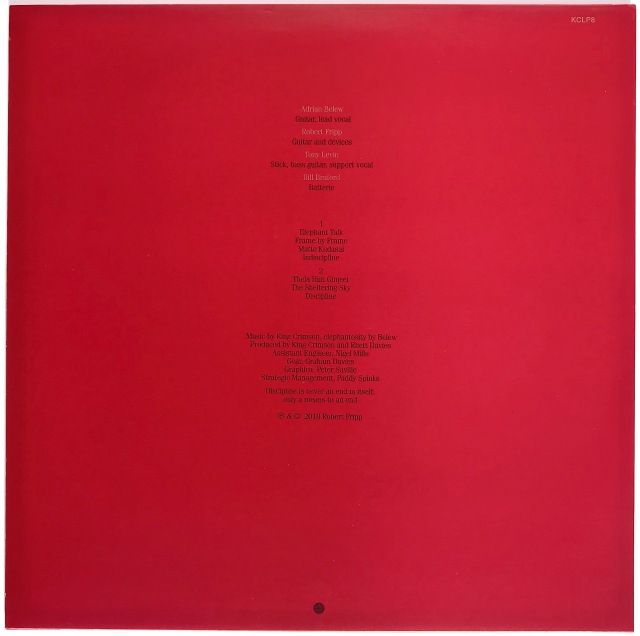 Beyond And Before (2011) Paul Hegarty, Martin Halliwell (Continuum, NY)

← PICKING BY THE BUSHEL
VERTICAL RETURN →