Thunder rumbled around the pre-dawn purple, but burrowing under the doona I got another hour’s sleep. Maybe more a doze. When I crawled out it was light; brighter than expected given the vague sleep-penetrating sounds of heavy rain earlier. The morning blind raising ritual let in more light and more weather. The rain wasn’t rain, but small hail, like a massive slushie flung over the region. I watched, transfixed as the slurry accumulated on the decking like an arctic time lapse film. It drew me closer, but it was cold outside. Freezing. A shiver prompted retreat.

Sitting hunched over a bowl of cereal I thought about the day. The first part was clear. After a coffee, one last glance over the submission that had occupied my waking hours for the past month, then hit “Send”. There’s a point after which you’re only looking for typos or dodgy formatting and can’t really see the prose any more. It would be a relief to hear the swoosh of the departing email and claim back my head, hopefully for only a couple of months. But in the short term, a chance to re-engage with other projects, other interests. Vinyl Connection has rarely languished this long in the netherworld of inactive blogs; the photo post didn’t fool anyone, especially me. It being a day for staying inside, hiding from the greyclouds of winter accelerating across the state, it should be a perfect opportunity for writing. Thoughts turned to a disc I’d received pre-release but that hit the stores—or, more probably, the on-line inventories—only yesterday. Perfect for a 9 degree day. The Chills. Straight outa cloudy Dunedin.

Scatterbrain, released in May 2021, is a return to the recording studio for Martin Phillips, the New Zealand songwriter and pop craftsman whose band The Chills last released an album in 2018. They began a lot earlier, though. Brave Words, the debut, was released on highly respected label Flying Nun back in 1987. After a fourth album (Sunburnt) in 1996 Phillips took a significant break. The next release was Somewhere Beautiful in 2013, since which there have been semi-regular offerings of his expertly crafted indie pop. Timelines not withstanding, it is a delight to welcome back this talented and thoughtful songwriter, older and wiser.

Old is a relative term. The opening song on Scatterbrain is an homage to standing stones, the neolithic monuments dotting Britain (and other European sites). It is lyrically simple, just a couple of verses and an hypnotic repetition of the mantra: Give me the power of ancient stones / honour the monolith. On listening, there is a guilty tug towards Spinal Tap’s “Stonehenge”, though The Chill’s incantation does enough to dispel images of dwarves dancing around an 18 inch henge.

Time is measured differently in the next song, “Hourglass”, an acoustic guitar led rumination on passing time. “Do the grains fall through the hourglass?” Phillips asks, then answers himself, “Only when you’re counting”. It’s a good point, well made: we are happiest living in the moment. The chiming rain of falling grains (or years) is an synthesised eighties throwback; a patina of nostalgia in harmony with the melody. A contrast between song themes and the lush melodies is a characteristic of this glowing album which somehow injects a quiet optimism into awareness of our inevitable temporary existence.

“I won’t cry, there must be something caught in my eye” is the unconvincing claim of “Caught in my eye” where plaintive piano and cello create a distant (lyrical) cousin to 10cc’s “I’m not in love”. It is a romantic goodbye song contrasting—there’s that word again—with “Safe and sound” a little later.

“Scatterbrain”, the title track, makes effective use of a sample of a scratchy record and is one of the more outward focussed songs here. It’s even a bit angry as Phillips challenges his interlocutor to use their grey matter to look at what’s actually happening in the world. Similarly, “Worlds within worlds” takes a swipe at the post-truth society that has overtaken us like the foetid deluge following a tsunami. 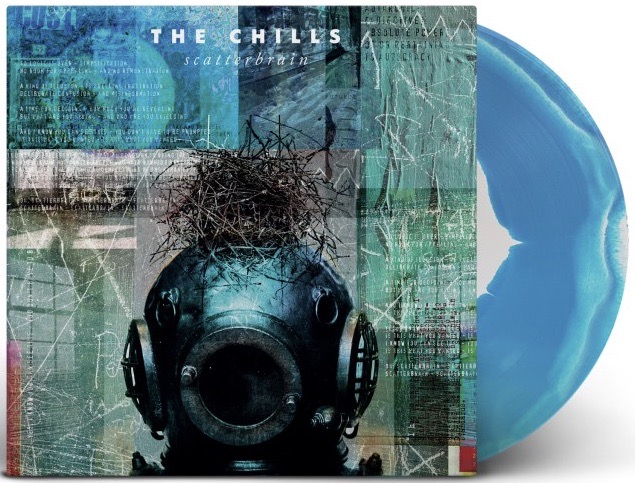 The theme of time’s passage and the inevitable changes it brings wanders throughout Scatterbrain. In counterpoint to the miniature pop arrangements and sweet melodies delivered in Phillips’ light, persuasive voice, the lyrics would not be described as dark, but twilight is certainly trending. “Safe and sound” is a song of domestic retreat from the cold outside world; considering recent years, the dangerous outside world. The opening few bars sound startlingly like 80s Kraftwerk but when Phillips breathy voice enters, it is obvious we are grounded in humanity rather than technology. Somehow the songwriter manages to make this splendid isolation comforting, like looking at a Christmas card of a northern hemisphere winter scene from the cosiness of your sofa, leaning inwards to a loved one.

Up or down, happy vs sad, in and out. The jaunty “Little Alien” has a melancholy lyrical launchpad: what might it be like to be the last of one’s race? Couldn’t be a metaphor, could it? The plinky synth is back. Still, any song that rhymes Circadian, Arcadian, subterranean and alien is all right by me.

There are ten songs on Scatterbrain, all more-or-less three minutes long. It’s a half hour of well polished music that could be described as melodic chamber pop, and if there is a little too much use of chiming keyboard sound tones (echoed, sounding rather like a phone ringtone), then that is easily overlooked in an appreciation of the overall craft. If you don’t know The Chills, think an introverted Robyn Hitchcock, a grown-up Belle and Sebastian, or a mystical Prefab Sprout. Or just seek out Scatterbrain and have a listen to an album that should be warmly received by fans and newcomers alike.

A final note about the wonderful cover art by David Costa.

After a brief but influential musical career in under-rated UK folk-rock band Trees (their two key albums have been mentioned in the 1970 and 1971 series), Costa built a career as a designer/graphic artist. His list of album credits is hugely impressive (view it at Wiki, here) and includes some major album covers by artists you may have heard of:

Queen — A Night At The Opera

The Beatles — Let It Be – Naked

Costa also did the book design for The Beatles Anthology book (2000). Martin Phillips and Fire Records must have been thrilled to have him on board for this album and delighted with the results.

← WHAT’S GOING ON AT VINYL CONNECTION?
WITHIN HEARING →