Soul gets serious with Marvin Gaye’s ground breaking album. In a year full of turbulence and change, the golden voiced hit-parader found a new groove, eschewing fantasy to write about what was really going on. The result was one of the great albums of its era, one that—amazingly, stunningly—manages to transcend time in a way that Dr Who could only envy.

When I began this project late, What’s Going On scraped into the Top 50. Around May, the month it was released in 1971, I listened again, more attentively. The segues between songs caught my ear, as did the codas that appear on several songs. The deft and subtle use of strings hit me like a velvet glove and Marvin’s narrations seemed like more of a spoken counterpoint than an interruption to the music. The album jumped into the Top 20.

Later in the year things got serious with the rankings. And also less significant. All the music was great, all the albums worth celebrating. Most of the Top 10 seemed settled; the recordings seemed to choose themselves. Except, except… What’s Going On, perhaps benefiting from the fascinating doco 1971: The Year That Changed Everything, seemed to be gathering both kinds of momentum. It’s place in that storied year seemed more and more significant as the breadth of my appreciation increased while its resonance with 2021 became more and more apparent to the extent it was almost spooky.

From the opening title track through to “Inner City Blues (Make Me Wanna Holler)” Marvin Gaye sang with heart and soul, sprinkling in jazz, funk, a touch of latin, a leavening of blues. Even the god bits seemed OK in an immersive experience covering everything from religious sermonising to a love song about drugs—”Flying’ High (In The Friendly Sky)” is a strong contender for the award of Most Groovy Song Ever (About the Ravages of Addiction).

So there it is. The #2 slot filled by Mr Marvin Gaye, still observing on What’s Goin On fifty years later. Not sure we know quite yet. 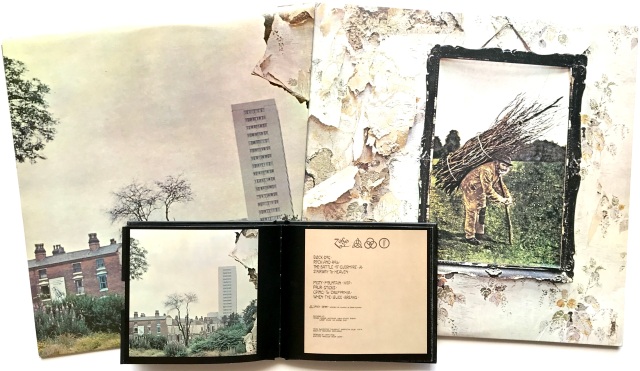 No better rock album preceded Led Zeppelin’s fourth LP, and precious few that followed can compete with its complete mastery of both power and finesse.

Opening with the one-two salvo of “Black Dog” and “Rock and Roll”, you are still picking yourself up off the floor when the folk-infused magic of “The Battle of Evermore” transports you to a place where all that glitters is, indeed, gold. Sandy Denny (Fairport Convention) was the perfect choice for the female voice; she gives no quarter to Robert Plant and lifts the energy of the record into a new, rarified zone. After being greeted with confusion and disdain for their folk/mythological pretences on III, this fabulous song was the best of all possible answers. And just to ram the point home, the next song isn’t bad either. It’s called “Stairway to Heaven” and is worth a listen. (Personally, these days I go for the Heart version, played live to Page, Plant, Jones and a few other guests, at the Kennedy Centre in 2012.)

The second side of the album is not as famous, but just as satisfying. John Paul Jones displays his keyboard skills on “Misty Mountain Hop” (apparently a drug lyric; who’d have guessed?) while the title of “Four Sticks” references drummer John Bonham’s doubling up of his woodware to increase power, something he obviously needed. “Going to California” is an acoustic song dripping with early Seventies sentiments; it’s pretty, smells heavily of pachouli,  and cleanses the palette (sonically speaking) for the thunderous finale, Memphis Minnie’s “When the Levee Breaks”.

As I write, I’m listening for perhaps only the third time this century and it. is. good.

Phew. Made it with hours to spare.

Thank you to those who have trodden this meandering path through seventy-one albums released in 1971.

May your stairway ascend and your levee remain intact.

I wonder if any half-way decent albums came out in 1972?