If ‘The Tourist’ is your favourite song on OK Computer, then you’re more than likely to fall in love with Cocteau Twins. That elegiac, yearning quality embedded in the best Thom Yorke vocals infuses Elizabeth Fraser. Perhaps you know her voice already. The Cocteau Twins song most people know is ‘Song to the Siren’, a glorious heart-breaking anthem to vulnerability and loss that soars on Elizabeth Fraser’s peerless voice.

There are two small problems with that. Firstly, it’s a Tim Buckley song [1]. Secondly, the performance is not Cocteau Twins but by This Mortal Coil [2], a kind of 4AD [3] house band that included Cocteau Twins members and Lisa Gerard of Dead Can Dance. 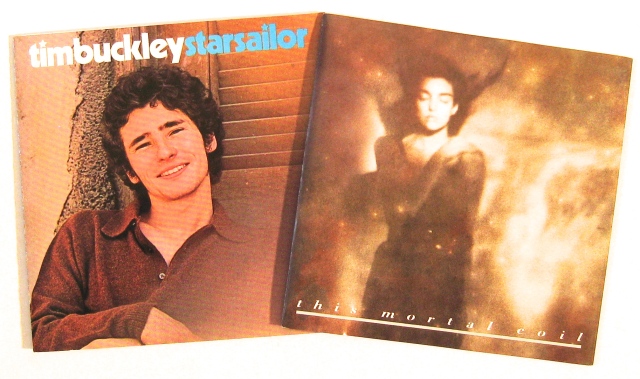 For simplicity and continuity, let’s just insert those footnotes here:

[1] ‘Song to the Siren’ appears on Tim Buckley’s 1970 album Starsailor. Buckley was a restless and fascinating artist well worth investigating, but this album is probably not the best place to start. It is relentlessly experimental, using Buckley’s remarkable vocal range to disquieting effect. Startlingly uneasy listening.

[3] 4AD is the label started by Ivo Watts-Russell in 1979. During the 80s something of a 4AD ‘sound’ developed, characterised by keyboard atmospheres, echoing, often treated guitars, and lots of reverb. There was a discernable design aesthetic too. Designer Vaughan Oliver’s company 23 Envelope was responsible for many of the album artworks which were full of dark, enigmatic yet romantic images (see It’ll End in Tears, above, and Treasure, below).

[2] Ivo Watts-Russell put together a studio based ensemble who recorded both original material and some of Ivo’s favourite songs under the moniker This Mortal Coil. It’ll End in Tears was the first album, released in 1984. In addition to the cover of ‘Song to the Siren’, the album included versions of two songs by Big Star’s Alex Chilton.

Someday I’ll tell you about my first encounter with the transporting magic of This Mortal Coil’s version of ‘Song to the Siren’. It involves drugs, dungeons and dragons (now posted here). But for now we’ll return to the Twins.

The first Cocteau Twins trio consisted of Robin Guthrie, Elizabeth Fraser and Will Heggie. After the first album (Garlands, 1982) and an EP (Peppermint Pig, 1983), Heggie departed. A duo album (Head over Heels, 1983) and another EP followed before Simon Raymonde joined and a second creatively productive (if internally unstable) trio was formed. This newly configured outfit warmed-up with an EP, 1984’s The Spangle Maker. 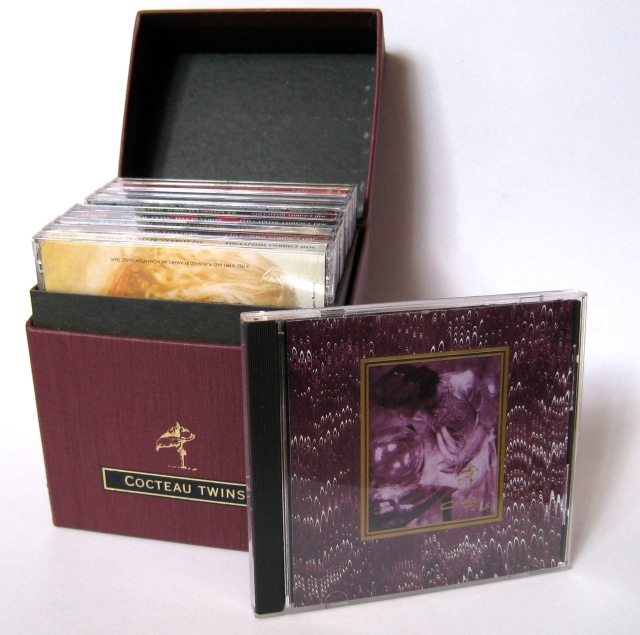 Now it must be noted that Cocteau Twins EPs don’t wear out their welcome. Most have three or at most four songs and clock in comfortably under fifteen minutes, which will not extend even those of short attention span. After the drum-driven wake-up punch of title track, swoon to the bird-of-paradise-salute-the-dawn gorgeousness of ‘Pearly-Dewdrops’ Drops’. The disc is rounded out with ‘Pepper Tree’, which manages to sound both pensive and optimistic. With The Spangle Maker, the Cocteau’s sound coalesced into something beguiling and mysterious. The EP ends and you want more.

And more duly arrived with the album Treasure, released in 1984. 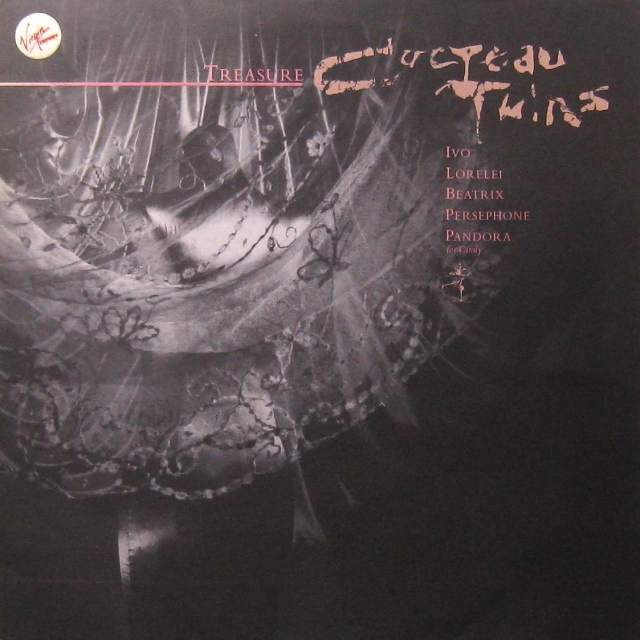 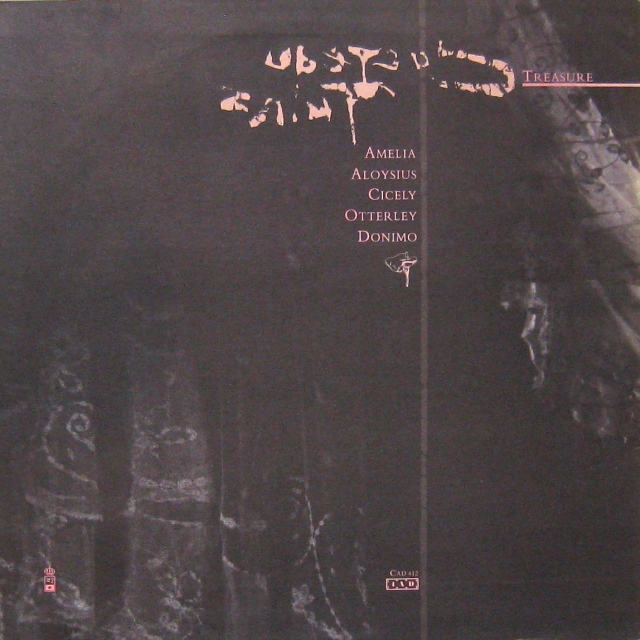 Treasure delivers what it says on the box, a five-star album of ten flawless songs full of drama, wordless entreaty and atmospheric guitar. Despite there being no words as such, there is richness and variety in all areas: melody, texture, rhythm.

As a slight diversion, it is interesting the titles artists choose for songs sans words. Some, like Tangerine Dream, conjure a mood or atmosphere. ‘The Big Sleep in Search of Hades’ from the Dream’s Stratosfear is unlikely to make anyone’s disco night playlist (unless it’s zombie night, of course). In contrast, electronic colleague Jean-Michel Jarre was quite happy to leave it to the listener… Oxygène Parts I to IV leaves plenty of breathing space for your imagination.

For the Cocteau Twins, the absence of language provoked a flowering of imaginative titles that are as richly scented as a garden in Spring. You probably noticed this on The Spanglemaker EP but here are some more tasty examples:

Yet when it came to Treasure (1984), they opted for a series of ten uncommon names. These children of mystery and imagination each have their own character so instead of describing the music, here is a brief image of the personality of each child. 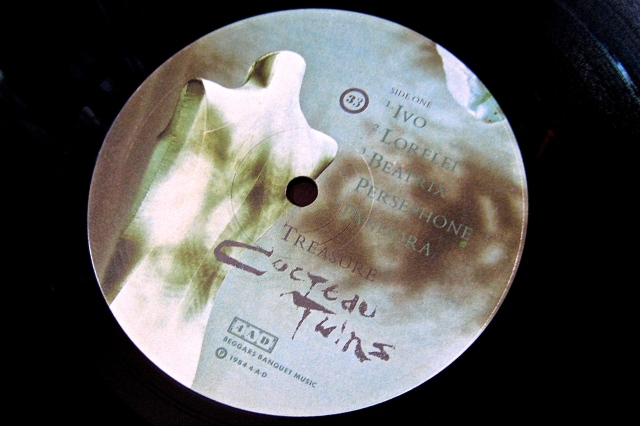 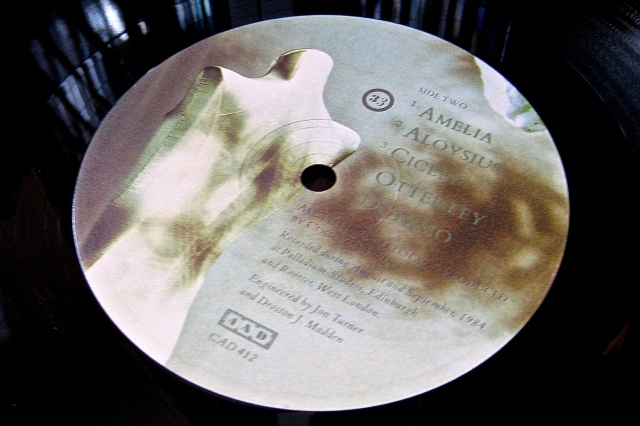 The album cover is simple, even enigmatic; the design both sumptuous and evasive. One of the defining features of 4AD releases is their strikingly different ‘look’. In the Cocteau Twins catalogue there is an antique chic that pervades the art and, surprisingly, compliments the penetratingly atmospheric music.

There isn’t much more I want to say about Treasure. If you know the album or other Cocteau Twins music, do share your passion. If not, consider exploring beyond the fields you know. You may well be transported.