TIME OF THE PREACHER

In the mid-80s I shared a house in Kensington. That’s not the Kensington next to Hyde Park in London. It’s the inner city village adjacent to North Melbourne, squeezed between Flemington Racecourse, the railway line, and the Maribyrnong river. It was a good time. Ali and I got on well, sharing some commonalities –uncommunicative mornings, Dungeons and Dragons, a belief that evening meals must be pasta based – and managed to have both individual lives and companionship. When it came to television, Ali tolerated my M*A*S*H obsession (I think my VHS tape recordings peaked at 17 three-hour volumes) while I indulged his love of NBL basketball. Occasionally we sat down together and watched something or even recorded a program we imagined the other would like. It was a friendly and relaxed home. So when I heard about a new BBC thriller premiering on the ABC (the Aussie equivalent of the Beeb), I settled down to watch and inserted a tape into the recorder just in case Ali might enjoy it when he returned from pounding around a basketball court with the Blue Droogs. (I’m not making it up – that’s what they called themselves. They wore blue truck-driver singlets rather than lurid basketball shirts and played together for years and years)

When Ali arrived home later in the evening, I thrust the tape towards him with an expression mingling awe and delight (not an easy combination, but I’d been a Drama student, OK?) and the exhortation, “You have to watch this. It is brilliant!”

Edge of Darkness was originally broadcast in six one hour episodes. I was so enthralled that I continued to tape each instalment and watch it a second time with Ali in the week between broadcasts. It was that riveting. Though Edge of Darkness has rarely been shown again, it is available on DVD and the copy I ordered just arrived in the post. I’m planning to watch it with Ms Connection, feeling both excited and nervous about whether it will hold up after all this time. 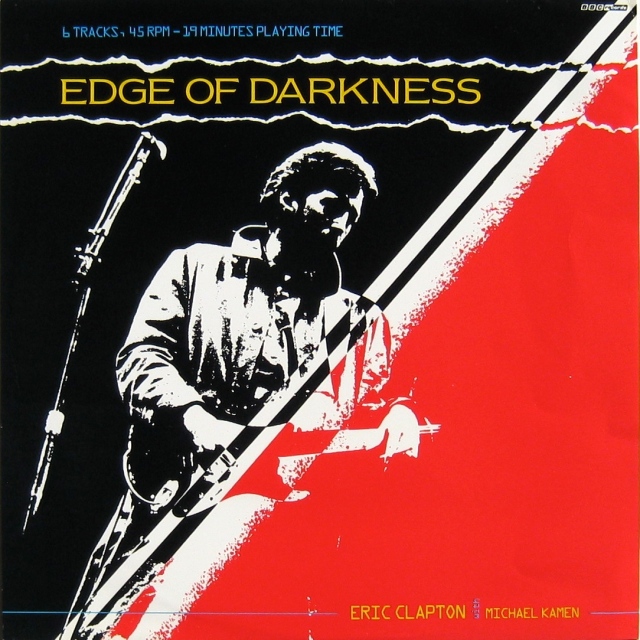 Back to the 80s. One standout aspect of the series was the music, particularly the dramatic, soaring theme. Co-written by Eric Clapton and Michael Kamen, it combined Clapton’s trademark yearning, blues-infused guitar with subtle orchestral arrangements and insistent, aggressive drumming* that was not diminished by the 80s studio sheen. It was Clapton’s first foray into soundtrack writing and is a fine genre debut. Others thought so too – the music won an Ivor Novello award and a BAFTA.

I did not want to decorate it, however, I wanted to own it. But that was tricky – it was a 12” EP that none of the regular stores had even heard of. ‘Oh, I suppose we could order it from the UK… might take a few months.’ No thanks. I’ll borrow some of Bob Peck’s detective nous and track it down or die trying. Mercifully, the ultimate sacrifice was not required. Using powers of deduction inspired by the story, I hypothesised that if the ABC was screening the series, then perhaps the ABC Shop in the city might stock the music. Result. And after recuperating from the shock induced by its price – $16.99 for an eighteen minute 12” when the average price of a whole album was $12.99 – I took it home.

[Have a listen here while you read – it’ll add drama]

Playing the EP again this morning, it remains sombrely evocative despite exhibiting a common trait of soundtrack music: when you have a good theme, flog it to death. Here the melodic line of the title piece recurs three times across six tracks, though I must confess I enjoy the recapitulation – it is a fine filmic tune. Clapton was clearly pleased enough with the title piece that he performed it live. It appears on the double CD 24 Nights, released in 1991**, as the album’s final, powerful performance. The National Philharmonic Orchestra conducted by composer Michael Kamen provides the setting via a spacious arrangement that manages to both highlight the theme and enrich the background arrangement. It’s big and dramatic and really quite exhilarating. 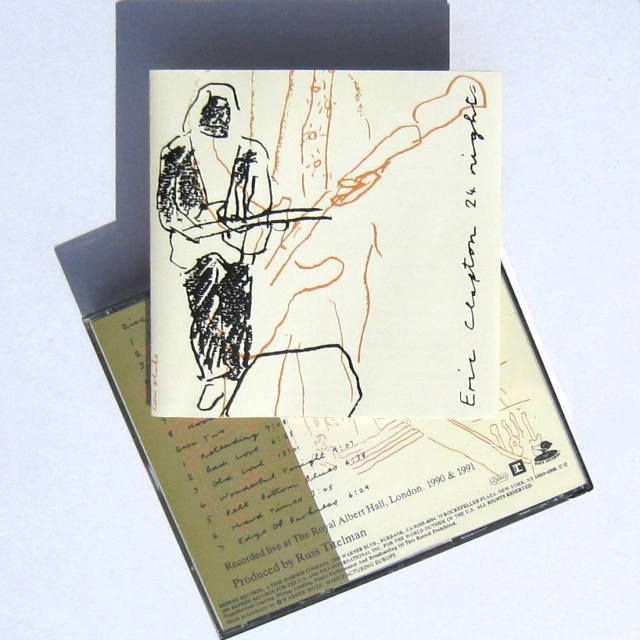 But Eric’s guitar theme was not the only thrilling music in Edge of Darkness. Joe Don Baker introduces the confused and grief-stricken detective to, of all things, a Willie Nelson song. It’s called ‘Time of the Preacher’. As the mysterious American explains to the British cop, this preacher has nothing to do with church. It’s period slang for a gun.***

It was the time of the preacher

When the story began

Of the choice of a lady

And the love of a man

How he loved her so dearly

He went out of his mind

When she left him for someone

He screamed like a panther in the middle of the night

And he saddled his pony

And he went for a ride

Now the preachin’ is over and the lesson’s begun.

The song is like the tale: spare and haunting. A folk-country story sung in Willie’s wavering, nasal voice. And now an even more unlikely quest began. Find The Red-headed Stranger by Willie Nelson. Because although I had half a dozen Clapton records in the collection, I sure as heck didn’t have no goddam cow-pokin’ gun totin’ country. And so it came to pass that after many dusty journeys in unfamiliar musical lands, I finally met The Red-headed Stranger and he accompanied me home. Some thirty years later the LP remains just about the only country record in the Vinyl Connection collection. But people who know something about the genre agree: it’s a good one. It was massively successful, suggesting this opinion was widely shared.

The first side unfolds like an epic Clint Eastwood western compressed into less than 15 minutes. A lone rider returns home, daydreaming about the woman he loves. She’s the little lady he left behind while away on his enigmatic loner business. But when he returns this fateful day, she has gone. Run off with an ex; presumably someone with greater emotional availability who didn’t keep riding off into the sunset.

But he could not forgive her

And the halls of his memories

He screamed like a panther in the middle of the night

An’ he saddled his pony

An’ he went for a ride

Now the lesson is over and the killin’s begun

It is true that full appreciation of this story requires embracing the murderous male-perpetrated family violence at its core; perhaps that’s why it’s called ‘outlaw country’. Enjoyment is also enhanced by avoiding too much social analysis regarding the trajectory of a society that not only accepts but has actually endorsed the killing of people because (a) citizens have the right to bear arms, and (b) you do not approve of their behaviour, hair colour or choice of partner. But that’s all a bit serious for a li’l ol’ music blog. ****

Perhaps we should return to the album. Normally I am not a big fan of narrative story-songs. Even a tale as strong as Dylan’s ‘Lily, Rosemary and the Jack of Hearts’ starts to pall after repeated listens. Yet this song cycle (or concept album if you prefer) works pretty darn well. Especially the first side, which uses the ‘Time of the Preacher’ theme to link the songs musically and lyrically. The subtle changes of the closing couplet are spine tingling while the sparse production helps add a timeless quality; maybe simplicity enhances longevity. Or perhaps I’m hopelessly biased by my remembered love of Edge of Darkness. When asked about my favourite television experiences, it has consistently appeared in a notional top three. Now those positive memories are about to be tested. The DVD is out of its cellophane wrapper and sits, brooding, by the player.

An’ just when you think it’s all over, it’s only begun

* I was unable to discover who played the drums. Could well be Phil Collins who worked with Clapton on 1985’s Behind the Sun; it has his punchy 80s sound.

** 24 Nights is an interesting and enjoyable CD, chronicling as it does a series of performances by Clapton at London’s Royal Albert Hall using a range of ever larger ensembles. The series of bands is described thus:

*** The Allmusic guide states that the story is about a religious preacher. Although that conclusion can perhaps be inferred from a line in the song, I don’t read it that way.

**** If, however, Charlton Heston shoots me for having a divergent opinion on firearms, etch ‘The lesson is over’ on my tombstone.