There are certain sounds and rhythms that grab you tight and shake. Think The Kinks ‘You really got me’ with that distorted, snarling guitar or the irresistible loping boogie of ‘On the road again’ by Canned Heat. The first pop song I ever clocked as having a reference to religion combined – or perhaps appropriated – both of those. It began with insistent, distorted guitar. Hand claps are joined by a fabulous echo guitar note then the vocal enters, much sweeter and more melodic than you’d expect.

So you know that when you die

He’s gonna recommend you to the spirit in the sky

Listening now, the lyric does not connect but the music grooves. Though the guitar solo is simple, the beat and that fucked-up guitar sound are hot and eternally memorable. Sadly the rest of the Norman Greenbaum’s 1969 album is very little like that single. It is pleasant unremarkable folk-tinged pop. Still, ‘Spirit in the sky’ is a beaut song.

A couple of years later the Five Man Electrical Band came out of Canada following ‘Signs’, a song about how you can be alternative and hippy-ish but still have a connection with the great gig in the sky. I remember liking this on the radio; it begins with a strong tom-tom beat, early Traffic-styled organ and a great guitar riff that dissolves into electric piano and the vocals. Despite having hair that barely reached my collar, let alone long enough to tuck under a hat, I was entirely in tune with the sentiment. Don’t let the man grind you down.

A few years later (see next segment) when a couple of friends and I were singing vaguely Christian songs in Church-run coffee shops here and there, I learned ‘Signs’ and used to belt it out given half a chance. It struck me that the singer was not so much cross, as damned angry (which was fine with me).

So I jumped on the fence and-a yelled at the house,

“Hey! What gives you the right?”

If God was here he’d tell you to your face,

Sounds pretty ropey now, but you must remember that this was only a year after Jesus Christ Superstar had rocketed around the world making it – for the first and only time in history – almost cool to be a young Christian. Which, by 1974, I was.

Lost, confused and socially incompetent to a remarkable degree, I’d fallen in with a bunch of nice leafy-suburb kids at uni. They were all from posh private schools but seemed to tolerate my withdrawn and sometimes acidic personage both on campus and beyond. Naturally the natural next step was to fall in love with the best looking of the girls, undeterred neither by a total lack of experience or conversational skills on my part nor by the fact that she had a handsome boyfriend whose father was a senior cleric in the Anglican Church. These trivial impediments aside, it was the beginning of quite a long phase where I explored the social world by squeezing dollops of adultescent angst out of my tortured soul to anyone who would listen. Young Christians listened. Judy, lovely patient girl that she was, listened. And by osmosis I became a young Christian. I even eventually dated Judy briefly, but that’s another story.

Other than my Father accusing me of being a sanctimonious pup (he was doubtless correct but I was suitably wounded at the time) one further consequence of this Road to Optometry College conversion was getting into Christian music. But even my desperate attempts to adapt to the group norms did not hide the fact that most of it was shite. Cloying, smug, preachy, wet, often all four. As someone once said, Christian music generally meant ‘sloppy thinking, dishonest metaphors and bad poetry’.

Except for one album by the artist responsible for the above quote.

Recorded at AIR studios in London and featuring excellent session players (including John Wetton on bass), Only Visiting This Planet was the second album by Texan blonde Larry Norman. He released a staggering 100 albums during his career (Norman died in 2005) but Planet was the only one I ever listened to. It was enough. The songs were delivered with great conviction in Larry’s whiney nasal voice and were angry, political and sometimes– whisper it! – funny. He was a hot hippy long-hair who doubtless pulled those Christian chicks like a denim  magnet. In the songs, he observed rather than preached; his angry observations on American life and politics were, I’m slightly embarrassed to say, influential.

It was a surprisingly tough choice picking a song from Only Visiting This Planet to share. I was very tempted by the acidic rapping of ‘Reader’s Digest’, but in the end went for ‘Without Love You Are Nothing’. If you remove the religious component, I pretty much agree with the sentiment of the title to this day.

This story needs a small confession: I only ever had a home-taped version of Only Visiting This Planet. I tell myself that is OK as Larry had an antipathy for copyright laws, yet when I found a battered copy of the original US Verve pressing at a record fair a year or two back, I had to have it. Partly for nostalgic reasons but mostly because of my utter delight that this monster Christian album has a back cover photo of the artist at the most famous pagan site in the entire world. Maybe that’s why Larry has his hand on his head on the front cover. His brain is about to explode from the cognitive dissonance. 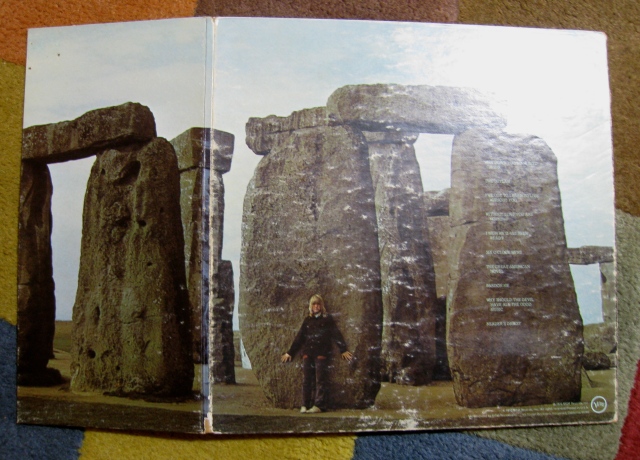 The road from Larry to committed atheism was a gradual one. In a nutshell, I found that therapy offered more paths forward than the bible, that awareness was more healing than faith, and that dogma and I were not comfortable stable-mates.

One staging post along the disentanglement road was a song that wonderfully captured the essential incongruity of a personal deity and life as we know it. It’s sharp, literate and like a number of Andy Partridge’s songs, rather cross. It’s a great single for the apostate.

Dear God, sorry to disturb you, but… I feel that I should be heard loud and clear.

We all need a big reduction in amount of tears and all the people that you made in your image,

see them fighting in the street ’cause they can’t make opinions meet about God, I can’t believe in you.

Off to bed now. Tomorrow I have an Easter egg hunt to plan.