Nowadays it is not that easy to connect with the sense of geopolitical tension that pervaded the early 80s. The threat of war —and here we are talking about nuclear conflict, not yer pussy tanks, napalm and barking M16 stuff— was seriously canvassed across the northern hemisphere. Sabres were rattled, bugles blown, hands were wrung in high places. Zeroing in on the catastrophic zeitgeist, Roger Waters’ Pink Floyd produced a response of sorts via the bellowing misery of The Final Cut in 1983. On film, the US gave us The Day After, a nihilistic enough narrative to have made President Reagan “depressed”, while the British contribution, Threads was so unremittingly bleak that it was shown on commercial television without advertisements. No-one, it seems, wanted to sponsor the apocalypse. But I was largely unaffected by these big-canvas theatrics. I’d had my gut well and truly wrenched by a 1982 comic book.

As Drama students, we were supportive of any and all productions mounted in the College’s excellent theatre, The Open Stage. Actually, as attendance at a substantial number of shows was an assessment requirement, you could argue that it was conscripted participation, but we mostly went because we wanted to see what each production was like. One that stood out in my first year was a chaotic but beguiling adaptation of the Raymond Briggs 1977 children’s/adult comic novella, Fungus the Bogeyman. The set designers had an absolute ball, creating a world of filth and grunge so evocative you could almost smell the mildew when you entered the space. Entranced and transported by this gently satiric exploration of meaning and purpose, I acquired the book soon after. Have to say, it still reads well; you just can’t beat existential themes for longevity and relevance.

A couple of years later, in my final year, I heard about Briggs’ new book and knew this was one I wanted to get hot off the press. So, after scraping together the necessary shekels I rushed down to Space Age books in the city to make the purchase. 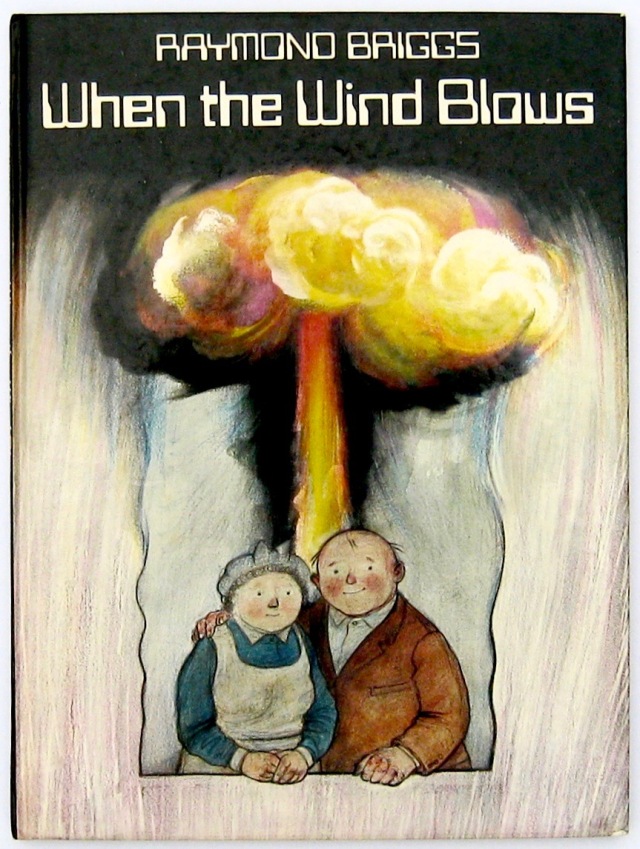 I took it home and read it after dinner. Then sat in silence for several hours.

For those unfamiliar with either Raymond Briggs or his everyday ‘hero’ Jim Bloggs, here is a brief introduction. 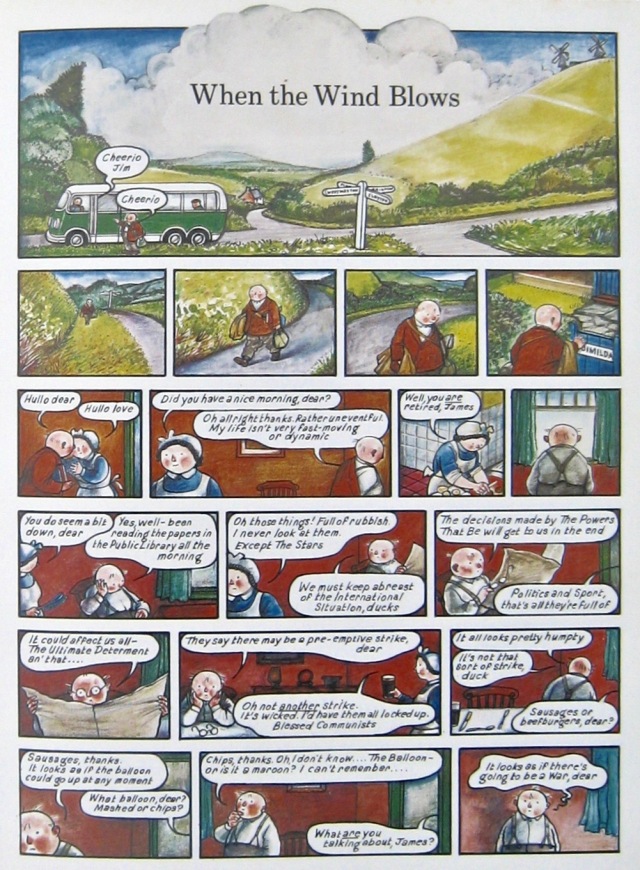 Having retired from his job as a lavatory attendant, Jim lives a quiet life with his wife Hilda. Though middle-aged, they have a childlike innocence and an unbreakable faith in “The Powers That Be” who, Jim is certain, will look after them come what may. But what comes is not conflict of a kind that the Bloggs, veterans of an earlier war, can comprehend. Discussing the building of a Fall Out Shelter according to the Council brochure, Jim is anxious about getting the angle of the leaning doors correct. But not too concerned, “After all,” he says, giving a thumbs up, “It’ll all be over in a flash.” And it is.

The arc of a missile falling to earth describes the latter half of the story, only in agonising slow motion. There are a number of moving moments as Jim and Hilda navigate the re-ordered world; moments both funny and tragic.

The leaves have all gone off the apple tree, ducks

Oh yes. What a shame

Still, it will be lovely in the Spring

It is Spring, dear.

Some might become irritated by the simplicity of Jim and Hilda, critical of their trusting naivety and passivity. But that would be missing the point of this story, which is both allegorical and factual. We do rely on our leaders to make big decisions; outcomes are felt both individually and globally.

As the ravages of radiation sickness take hold and the sweet old couple start to disintegrate before their own (and our) eyes, it is a hard heart indeed that doesn’t swell with sadness and a strong hand that doesn’t reach for the tissues.

Back in 1982, so moved and affected was I by When The Wind Blows that I decided it should be shared. Given there are only two characters, it would translate very easily to the stage, I thought. And what a powerful piece of theatre it would make. Breaking out the ancient typewriter, I set to and over the course of the next few days typed out the entire book as a script. 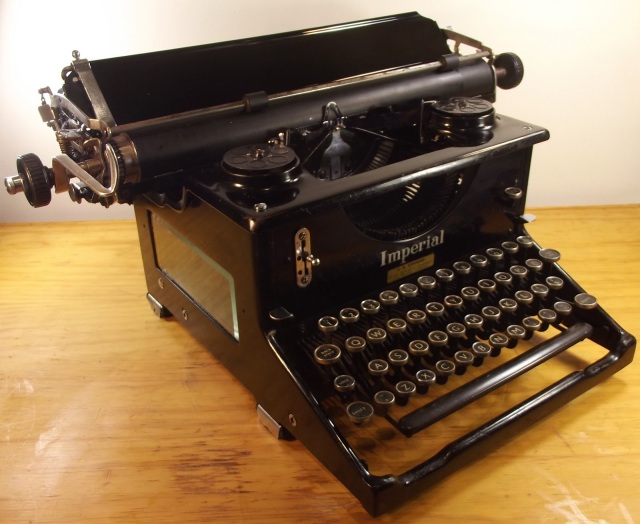 I showed the manuscript to a couple of Drama mates and we had some lively conversations about how it might be staged using the versatility of the college theatre space. One idea I particularly liked was to design a set that made the entire theatre the Bloggs’ house so that blocks of the audience were in different rooms of the home looking down into the central living room. We all got quite excited about how to create a suitably startling flash while someone suggested showering the patrons with stage glass when the bomb went off.

But somehow the idea never quite got off the ground. Perhaps it was because we were deep into our fourth and final year; for Psych students the thesis was looming while the Drama majors had their own tasks: producing a short play was their equivalent of our thesis and I’d been asked to perform a Beckett play for a mate. Other projects were simply put on hold.

The script languished in a filing cabinet for years until I discovered that there had been a stage adaptation soon after the book’s release. The bundle of pages was consigned to the recycling bin.

As well as a stage play, there was an animated film released in 1986, voiced by John Mills and Peggy Ashcroft and with incidental music by Roger Waters. The title song, however, was by David Bowie. It was a co-composition with Erdal Kizilcay, who also worked with Bowie on The Buddha of Suburbia. “When the wind blows” is a solid song despite having a rather perfunctory lyric, yet deserves to be better known. Perhaps the relative rarity relates to it only having appeared on a couple of compilations. (Listed here.)

As soundtrack albums go, this one is generally strong. After Bowie’s title song there are a series of pieces by a range of artists, including Hugh Cornwell’s almost jaunty “Facts and figures”, the menacing (in this context) Genesis instrumental “The Brazilian” and a mid-paced groove by Paul Hardcastle simply called “The Shuffle”. The main reason the When The Wind Blows OST is sought after by record collectors, however, is side two which comprises twenty-four minutes of original music by Roger Waters and the Bleeding Heart Band. Suffused with sadness rather than bile and delivered via entreaty rather than brow-beating, this is Waters at his reflective best. On the CD (I cast off the LP when I bought the compact disc. Yes, I know.) the whole thing is an un-subdivided suite of music. Yet it flows together well, with background snatches of dialogue between Jim and Hilda underscoring the sometimes melancholy sometimes stomach churning journey.

Particularly strong is a classic moody Waters song “Towers of Faith” that includes a lyric more uncomfortable now than when it was written thirty years ago.

And in New York City

The business man in his mohair suit

In the world trade centre

Puffs on his cheroot

Well I don’t care who owns the desert sands

Is with the hydrocarbons underneath

And the sea of battle rages

Around the ancient tombs

And mother nature licks her wounds

And the lonely boys locked in their towers of faith

Given that the Bleeding Heart Band includes Mel Collins on sax (heard brilliantly on this song) and Claire Torry on vocals (remember “The Great Gig in the Sky”? That’s her) and neat guitar work (both acoustic and electric) from Jay Stapley, it is a satisfying neo-Floydian experience that finishes really strongly with “Folded Flags”, as good a song as any Waters penned in the 80s.

At the end, even Jim’s relentless optimism fails as he glimpses the valley of the shadow of death, conflating the Psalm with the suicidal Charge of the Light Brigade. After the closing credits, a morse code signal beeps out M A D… Mutually Assured Destruction.

If even Ronald Reagan was impacted by stories of nuclear apocalypse, it is likely that immersing himself in the comi-tragic world of When The Wind Blows was powerful for Roger Waters too. Certainly it produced music of more enduring appeal than his last effort with Pink Floyd. Indeed, this long-term Floyd fan would consider offers to exchange his pristine copy of the bellicose Final Cut for the vinyl of the When The Wind Blows soundtrack. And I cannot help reflecting upon where Roger went next. His 1987 album was Radio K.A.O.S. with its apocalyptic themes and closing anthem of hope “The tide is turning”*. Interestingly, Waters also deployed “The tide is turning” as the finale to his Berlin Wall concert in 1990, bringing down the curtain on the Cold War with a grand gesture of unity. That’s the trick, isn’t it? To transmute despair into hope. 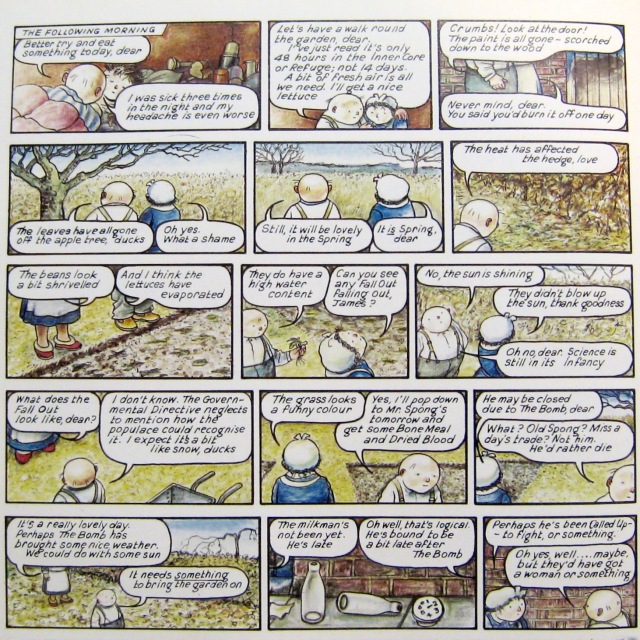 * There is a bootleg Radio K.A.O.S. re-issue that successfully integrates the When the Wind Blows material but I’ve never seen it in the wild.

© Bruce Jenkins / Vinyl Connection 2013-2019. Unauthorized use and/or duplication of this material without express and written permission from this blog’s author and/or owner is strictly prohibited. Excerpts and links may be used – in fact are encouraged – provided that full and clear credit is given to Bruce Jenkins/Vinyl Connection with appropriate and specific links back to the original content. Copyright is not claimed for images of album covers / LPs. Images are ‘fair use’ for the purpose of review and education.