IS YOUR DEODORANT STRONG ENOUGH?

Just recently, while introducing an album with significant input from Steve Winwood, (Stomu Yamashta’s GO), I wrote about Terry Hounsome’s Rock Record 7. To illustrate both the intricacies of the book and the impressive count of Winwood appearances, I cited an example of an album not worth pursuing. With self-assurance and confidence, it was noted that ‘Will Powers Dancing for Mental Health should not necessarily be top of my Want list*’.

That asterisk is important. The footnote read:

* Of course, if I saw an album called Dancing for Mental Health, I would buy it instantly, frame it, and put it in my office. So I don’t really know who I’m trying to kid here.

I imagine this was roughly the moment when the Gods of Vinyl decided to call my bluff.

A mere five days later, having a break in the appointment schedule and it being a glorious Melbourne autumn day, I went for a stroll. Casually but steadily, my feet guided me towards the intersection of Gertrude and Smith Streets, Fitzroy. Standing on that corner you can see two record stores within fifty metres. Forget sunshine, crisp autumn air, the joie de vivre that comes from simply being out and about; true happiness is glancing between two record shops and deciding which to visit first.

Having made a selection, I happily entered Northside Records and began a peaceful browse. Not more than a dozen LPs had passed under my fingers when I encountered Will Powers Dancing for Mental Health and laughed out loud. Not just a little under-the-breath giggle, but a great big ‘Oh, the Gods of Vinyl are such jokers’ guffaw. I have never seen this album before in decades of crate digging (as the young folk call it) and had not even heard of it until researching and writing the Winwood piece. Recognising immediately that while the Gods of Vinyl might move in mysterious ways, they are not to be trifled with, I tucked Will Powers under my arm and continued with the browse, grinning in a slightly deranged way that the owner —he of the blond afro and funkadelic clothes— might well have found slightly alarming. Indeed, his smile could have been described as nervous when I handed over my tenner while quoting from that famous play MC Lear:

They spin us for their sport

So what is the album like? This neat review reprinted from Trouser Press sets the scene nicely.

The vast web of rock ’n’ roll seems capable of stretching to include virtually any bizarre concept anyone cares to bring to it, but this strangely strange album clearly exists in a weird league all its own. Simply outlined, it consists of New York photographer Lynn Goldsmith reciting motivational self-improvement exhortations and emotional psychodrama, mostly in a synthetically altered ersatz-male voice, over busy dance music co-written variously by Sting, Steve Winwood, Tom Bailey, Nile Rodgers and Todd Rundgren and performed by an uncredited crew, all ostensibly produced by Goldsmith. A phenomenal exercise of super-ego, this is both a Great Artistic Achievement and an unbelievably smug heap of horse puckey. [Ira Robbins]

Couldn’t put it better myself.

One thing not mentioned by Mr Robbins is that not all the vocals are in the robotic synth voice. The last couple of songs are delivered by someone who sounds remarkably like Nile Rogers and are all the better for it. Apparently ‘Kissing with confidence’ was a Top 20 hit in the UK and features an uncredited Carly Simon on vocals. Check out the clip here. Check out the checklist for kissing with confidence here:

Is your breath fresh?

Do you have spinach on your teeth?

Is your deodorant strong enough?

The heart of this 1983 LP resides in its self-help messages. For your personal growth and well-being, here are some quotes from the lyrics:

Lack of assertiveness can be a problem (‘Happy Birthday’)

Be thankful for your problem; it’s a gift in disguise (‘Opportunity’) 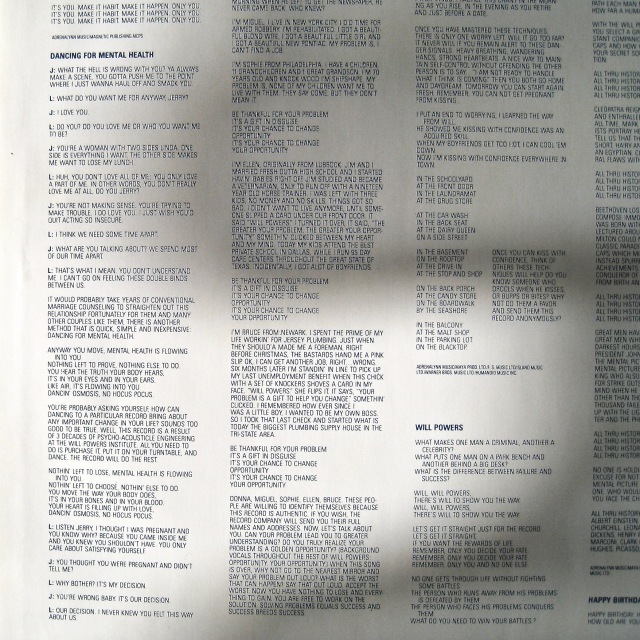 ‘Opportunity’ has a series of case studies on ordinary people whose lives were transformed by Will Powers. In perhaps my favourite conceit on the album, the lyrics include this wonderful guarantee: ‘Donna, Miguel, Sophie, Ellen, Bruce. These people are willing to identify themselves because this record is authentic. If you wish, the record company will send you their full names and addresses.’ And yes, there is an address:

LGI, eh? Could that be Lyn Goldsmith Incorporated by any chance? Who knows. I haven’t requested the full names and addresses yet, but in case you want to visit, here is a map. 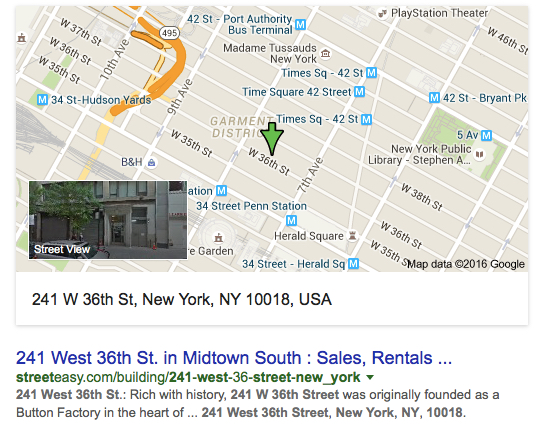 For anyone wondering whether I fulfilled my pledge by framing and hanging Dancing for Mental Health in my office, there’s no need to even ask. You don’t mess with the Gods of Vinyl.