What do we make of a new release by a rock veteran? As stars drop from the sky with numbing regularity, do we celebrate the simple act of survival inherent in creating new music?

Perhaps triumph is tempered by a niggling disquiet. What if, Bowie-like, this is a last hurrah; a pre-planned final chapter for an artist knowing with ultimate finality they are soon to be either stardust or worm-food (depending on beliefs). How does that affect the listening?

Some are hard-nosed about half-century careers. Starting from a conviction that no new music could possibly compare to heyday highlights, there is an arms crossed, raised eyebrow suspicion that doubts any new offering will be worth hearing at all, let alone sustain comparison with peak releases. Sadly, there is plenty of evidence to support this position.

Does it all, in fact, boil down to the impact of nostalgia (and loyalty) on the brain. I want to love it, ergo it is wonderful. It can’t be any good, therefore disappointment is inevitable.

Such were the musings of Vinyl Connection as we ordered the new album by the voice of Yes, Jon Anderson.

The album arrived a couple of weeks ago and I must confess to a thrill of pleasure as I removed the record from its mailer and gazed at the striking, intricate art work and hefted this satisfyingly solid slab of double-vinyl. There was also a teensy tremble of trepidation. 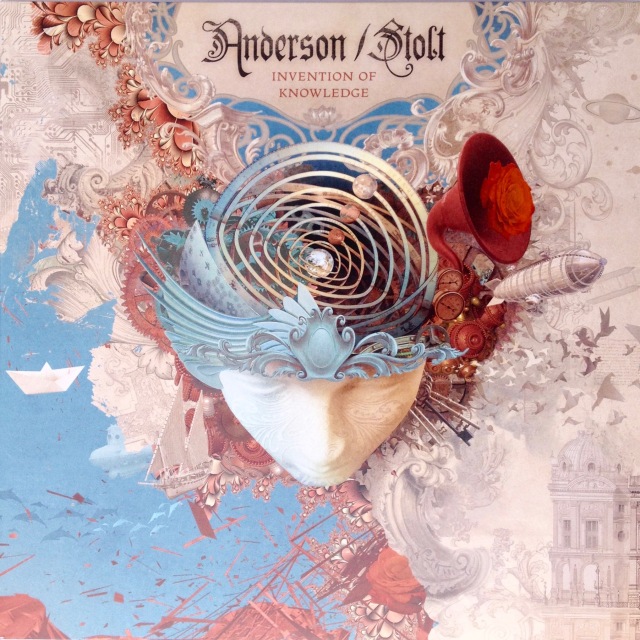 Invention of Knowledge teams Anderson’s ageless tenor with guitarist/composer Roine Stolt of Swedish band The Flower Kings for just over an hour of grandiloquent symphonic prog. For fans of progressive music it is probably one of the most anticipated releases of the year.

Anderson/Stolt are not a duo; they are not the only musicians on this sprawling album. A selection of top-notch guests make contributions of varying intensity (and audibility) but consistently high quality. One key contributor is keyboardist Tom Breslin, who Yes fans might know from his playing on the rather brilliant Symphonic Live DVD/album featured not long ago here at Vinyl Connection. Another is inventive bass player Jonas Reingold, a Flower Kings alumnus as well as some-time member of progressive bands Karmakanic and Tangent.

So what is this expansive opus like? First, the good news. Jon Anderson’s distinctive voice is in remarkably fine fettle. At almost 72, there is, perhaps, a slight quaver here and there, yet overall he sounds fabulous and hearing him warble his way across the album is a delight. Second item of good news is the deft and tasteful fret-work from Roine Stolt, a guitarist of variety and invention. The not-so-good news is that Invention of Knowledge has too much of the former and not enough of the latter. 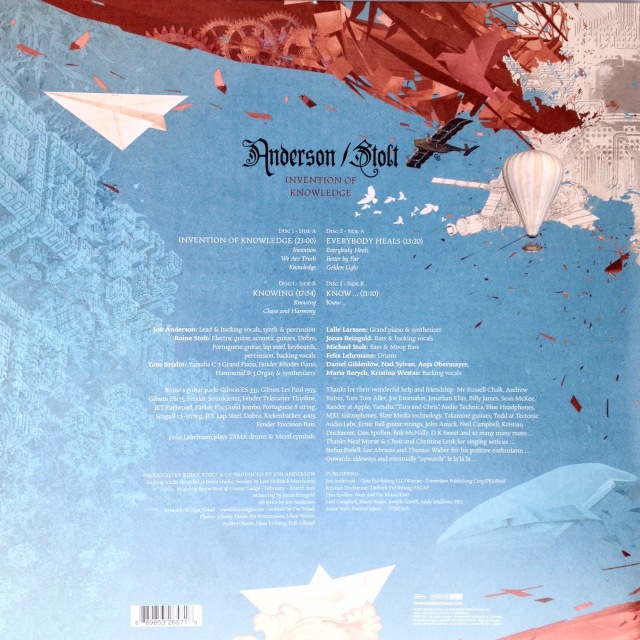 Words, words, words. Who reads them? Who really cares? Yes fans have been arguing about this since the early 70s, many lapping up Anderson’s cosmically-infused ‘we are love’ spirituality with crystal-vibrating gusto while others don’t give a toss about the reams of tosh Mr A. spouts as long as the music soars and roars and dances and dives. But there is no escaping the fact Invention of Knowledge is Jon Anderson’s baby. Listeners are bathed in his airy proselytising—“We are truth made in heaven we are glorious”—and showered in exhortations to “take it forward” (whatever “it” is). Not to mention the incomprehensible bits that are pure Jon. “Evolution of inventioning”. Huh? Sometimes it seems the album is one long unintelligible sermon from the prince of prolix. Breslin’s keyboards are beautifully layered—when given a window, he shines—some of the bass-lines bounce and leap in a superbly Chris Squire-ish way and Stolt is, as mentioned, fabulous. There’s just not enough of the instrumental business to sustain interest. And the drums being mixed so far back that they are almost inaudible doesn’t help the meandering feel produced by endless recitative.

I know some ears will hear complexity here, but for me it sounds unstructured. Lush and layered production covering an absence of musical mapping. Remember how Rick Wakeman introduced greater form and structure into the longform music of Yes? It’s a shame that Roine Stolt couldn’t influence Jon in the same way here. There are many segments seeming to build towards some kind of climax, but then it powers down for more singing. Heavenly harmonies, but no hellacious hooks. Rapture without riffage.

One curious observation is how the four sides steadily decrease in length:

Does it mean anything? No idea. Similarly, in terms of the message, I have no idea what any of it is about. That is a familiar experience to Yes fans, of course; surrendering to Jon’s scrambled gospel is the price of entry. You can trust he’s on the side of the angels, but don’t look too closely or you might notice the wings are papier mâché. Of course the possibility I am simply a travel-weary old cynic has not escaped me, but read this lyric if you will:

The sun (the time) will always shine on your tomorrow

Tricked you. The first line is Anderson, the second is Voltaire. Candide, the innocent traveller whose naive optimism is apparently untouched by cascading calamities, holds fast to the dictum (taught by his philosopher/teacher Dr Pangloss) for most his adventures such that we want to slap him rather than cheer for him. The sun will not always shine tomorrow. Shit happens, all right? Learning to deal with it is part of growing up. And indeed, although Dr Pangloss is resolute in his belief, Candide does learn something by the end: that we each need to tend our own garden. For myself, I’m aligned more with Henry Wadsworth Longfellow [1807-1882]:

Into each life some rain must fall

Really, if it’s sunny all the time, wouldn’t the risk of skin cancer worry you? 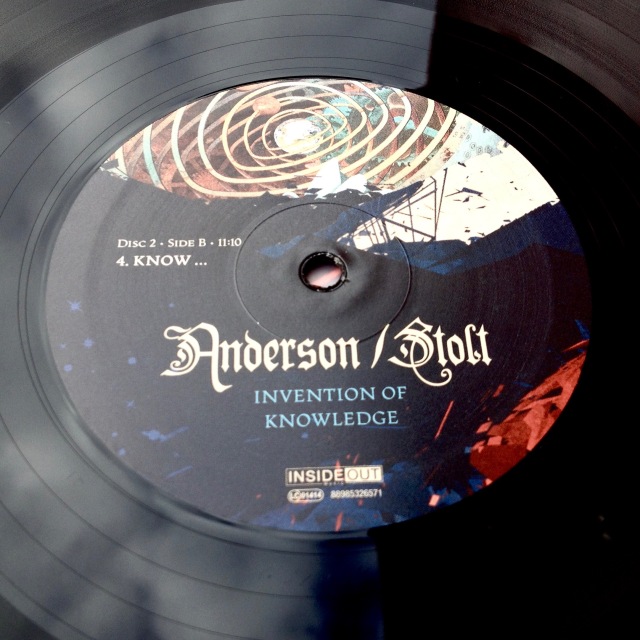 Although there are sections of “Knowing” (Side 2, vinyl; track 4 on the CD) I enjoyed a lot, the final side works best for me. Perhaps the (relative) brevity, maybe a sense of tying it all together, possibly even relief at reaching the end. The wisps of Yes classic “And you and I” don’t hurt either. That’s not to say that any of the music is bad; this is neither a commercial sell-out nor a half-hearted retirement project. Conviction (if not choruses) infuses the work. There are numerous short melodies scattered through the rambling sermonising that are very pretty, if under-developed.

Invention of Knowledge deserves to be held in similar esteem to Jon Anderson’s first solo album, Olias of Sunhillow. Yet it is hard to see this becoming a favourite album of prog-heads. The group who will celebrate Invention of Knowledge are those who simply love Jon Anderson’s voice and cannot get enough of his particular muse. They’ll be uplifted and delighted and I wish them joy picnicking in these fragrant meadows. As for me, I think I’ll reach for something closer to the edge.