We’ll open proceedings with this album of middle of the road smoothness from the catalogue of the Australian World Record Club. Regular readers will know that WRC cover art is something of a passion round these parts and there you have the entire reason this piece of 60s vinyl entered the VC domain. I love the invention-on-a-budget of WRC sleeve designs; their endless variations on a theme sprinkled with moments of inspired (and sometimes captivating) imagery.

The wonderfully titled Lovers in Tokyo is by the appropriately named Norrie Paramor (and his Orchestra), featuring the voice of パトリシア・クラーク. Actually, the lady doing bits of ooh-ing and aah-ing is Patricia Clark, but it looks much more impressive in Japanese, don’t you think?

I guess you could describe this music as lounge or ‘cocktail’ music. Cocktail For Love, perhaps (Koi No Cocktail). Smooth orchestrations for you and your sophisticated companions as you chat languidly about whether to stroll to the Golden Pavilion (Kinkakuji) to spy on the Young Lovers (Wakai Koibitotachi) before some delicious Sukiyaki freshly prepared by Miss Mikimoto.

Probably the second most amazing thing about this record is how Mr Paramor has almost totally expunged anything oriental from the arrangements. It is less convincingly Japanese than Sean Connery in You Only Live Twice (1967). I bet you didn’t think that was possible. Which makes the cover notes claim that “this LP present(s) a startlingly vivid musical panorama of Tokyo today” worthy of some kind of award.

Actually, the cover notes are rather wonderful. Bear in mind that this was released in the mid-60s (probably 1965 or ’66).

Thirty hand-picked musicians were assembled in EMI’s London studios to record these tracks. A far cry from Tokyo, perhaps? Indeed, yes! But as Norrie himself points out, Japan and Britain have much in common—notably the fact that both are “green and pleasant lands.”

What could be more Japanese than invoking the words of William Blake’s “Jerusalem”? Derek Johnson, who wrote the effusive notes, does not mention anything about dark Satanic mills and perhaps that is just as well.

The most interesting aspect of this LP, however, is not the music but the previous owner’s handwritten annotations on the back cover. What a trove of data about the gentle-person who laid out the princely sum of $1 for the privilege of taking home a Tokyo lover in January of 1967. And then noted each spin with tally marks neatly counted off into fives. Did they tally other aspects of life in the same way? Meals? Sexual congress? And ten plays. Why not nine or eleven? Maybe Norrie just couldn’t hold his/her interest any more. Or maybe there wasn’t as much in common between London and Tokyo as first appeared. Many an on-line love-hunter has discovered this sobering fact. 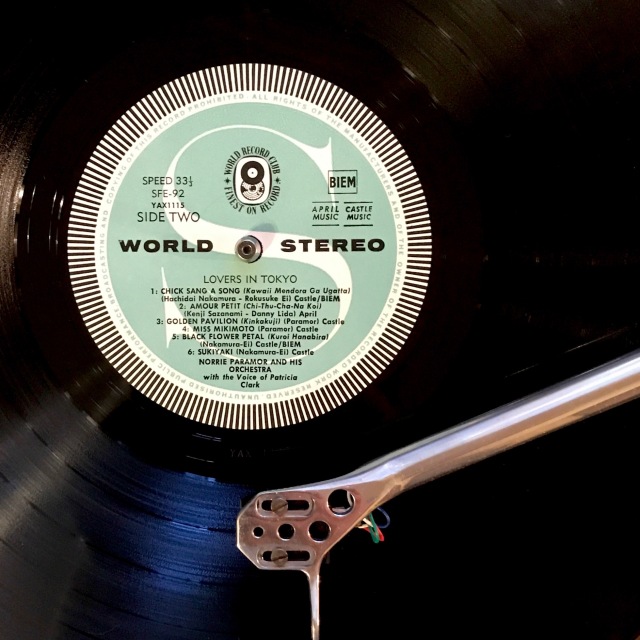 * Yes, another one. Would enjoy hearing responses to this idea for an irregular series.