In 1977, being on a trial separation from the University of Melbourne (it ended in divorce) I was working at Max Rose Electronics in suburban Melbourne. At the time I was deeply into prog heavyweights Yes for the playing, the complexity, even the unfathomable lyrics. All the things smart-arse music journalists were queuing up to pour scorn on.

Sensitive songwriters and soft-rock tunesmiths were also a chunk of the playlist, following the unimpeachable logic that if you don’t have even a sniff of romance in your life, then an album by Bread will do just as well. It didn’t.

Through late night AM radio, I was beginning to feel my way into jazz. Nothing too adventurous: some Oscar Peterson, The Modern Jazz Quartet, even Dudley Moore. The kind of music jazz purists sneered at as tame and safe. Suited my ears fine, back then.

It’s worth pausing to recall just how dire the charts were in 1977. Now I avoided this popular mush as much as humanly possible while working in a record store, but sadly I can sing along almost word perfectly with every one of those ghastly hits.

Here is a selection from the year-end list of biggest selling singles in Australia across the whole of 1977. These were all in the final Top 20.

Wings — “Mull of Fucking Kintyre”  (initially, not many knew it by its full title)

It may have been better in your neck of the Top 40 woods, though I doubt it.

It occurred to me that spinning a couple of singles as they arrived from the record companies and swiftly pronouncing them rubbish was possibly prematurely dismissive. So over the next few months I undertook a cautious listening program at the shop. I played at least one ‘punk’ album each Friday night during the dead time when everyone—including Max—was elsewhere having dinner.

Although a formal report was never submitted, what follows is a recollection of my reactions at the time. Or perhaps a reenactment. Maybe a fictionalisation.

Sex Pistols—Never Mind The Bollocks >> Too shouty. A bit scary. No tunes. No thanks.

Ian Dury—New Boots And Panties >> This is quite clever. Certainly better than the Pistols.

Elvis Costello—My Aim Is True >> Is this punk? He seems cross and clever. I’m confused.

The Clash—The Clash >> Didn’t have it in the shop.

Richard Hell and The Voidoids—Blank Generation >> Similar reaction to Bollocks but less so.

Iggy Pop—The Idiot >> I thought it was young punks in punk. Anyway, this sounds like Low.

Blondie—Plastic Letters >> Hey, this is OK. The US bands are quite different, aren’t they?

It opens with a tortured scream and ends with a Yeah-Hup roar.

In between Radio Birdman carve a tearing high-speed crash of rock mayhem out of squalls of guitar and throat-shredding vocals. Opening the album with the Stooges song “T.V. Eye” is both brilliant and honest. As it blasts out of the speakers you can hear this is indeed the jagged energy of Iggy and the lads reloaded downunder (Sydney) by a local (Rob Younger) and an American (ex-navy flight surgeon Denis Tek). In fact the band name comes from an Iggy mondegreen: in the Stooges song “1970” the line radio burnin’ was mis-heard and Radio Birdman was born.

Like The Saints and the Ramones, Radio Birdman are often described as proto-punk, which I think means they already existed when punk started but fitted better into this new category than any existing niche.

Some songs on Radios Appear are pretty straight rock—“Man With Golden Helmet”, for instance, has a Doors “Riders On The Storm” feel—while others are angry, snotty, and obviously punkish. “Descent Into The Maelstrom” sure is (except for the slower, quieter middle section). “Murder City Nights”, on the other hand evokes the Ramones (down to its short-sharp 2:22 timing) despite having a genuine guitar solo. It is petrol-flamed jump-up-and-down brilliant. In between is the fast, menacing “Anglo Girl Desire”, referencing one of the band’s own songs and their next album title. Post-modern self-referential lyrical cleverness or dumb luck? My money’s on the former. 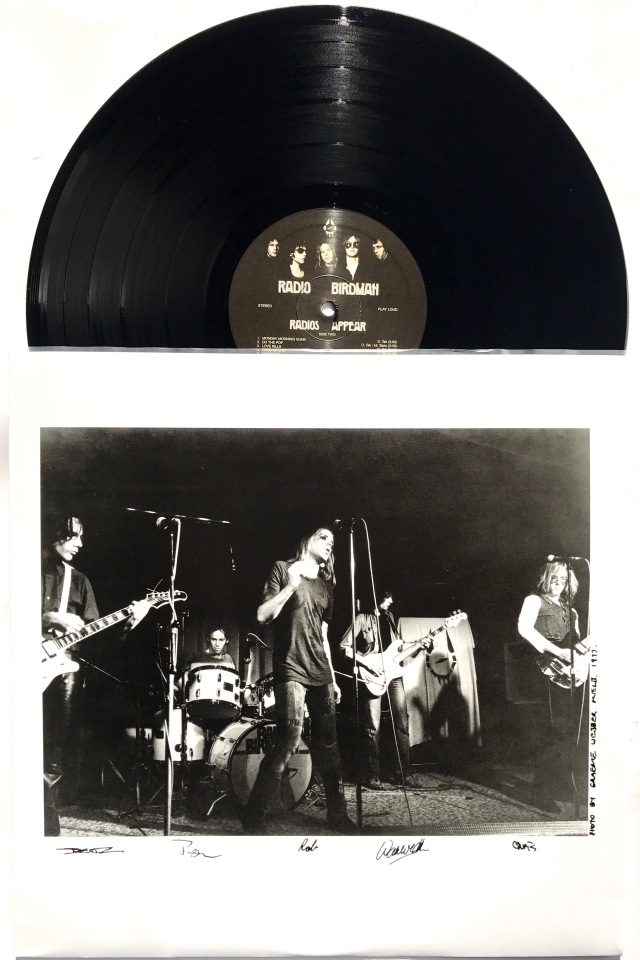 Side two is similarly rough-smash brilliant. Highlights are “Do The Pop” (borrowed as the title of an excellent 2 CD survey of Aussie punk/garage) and “New Race”. This latter song sounds disturbingly like it might be a bit, you know, right-wing. But the lyrics reassure it’s really about a new generation of young people whose anger will fuel change.

There’s gonna be a new race

Kids are gonna start it up

Really gonna punch you out

There is one quieter song, “Love Kills”, providing a nice contrast with all that bouncing off the walls adrenaline, but overall the album is Thunderbirds Are Go! 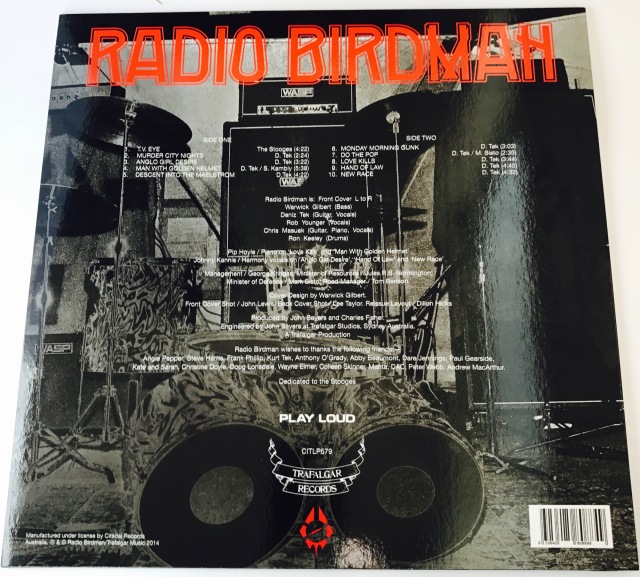 Radios Appear was released on Trafalgar Records in July 1977. You’ll need deep pockets if you want an original these days, so it’s fortunate the LP was re-issued by Citadel Records in 2014. On CD, Trafalgar released the original album in 1988 but in 2002 Citadel put out an expanded version, adding single “Aloha Steve & Danno” and Sire single “What Gives?” plus three other songs not previously on an album. This CD bears some resemblance to the “overseas” version of Radios Appear released on Sire in 1978 and re-issued on vinyl by Four Men With Beards in 2016.

All the info is at Discogs if you want it. What you really want is this album, in any form or format, to follow the instruction on the back cover and PLAY LOUD, often. But only, of course, if you want to get your blood jagging, your fists pumping, your legs twitching and concussion emanating from the inside. Yeah hup.

Not that I would have put it that way in 1977. What I seem to recall is showing the LP to one of the regulars at Max Rose Electronics who’d asked about Aussie punk. “This one’s quite good,” I said. 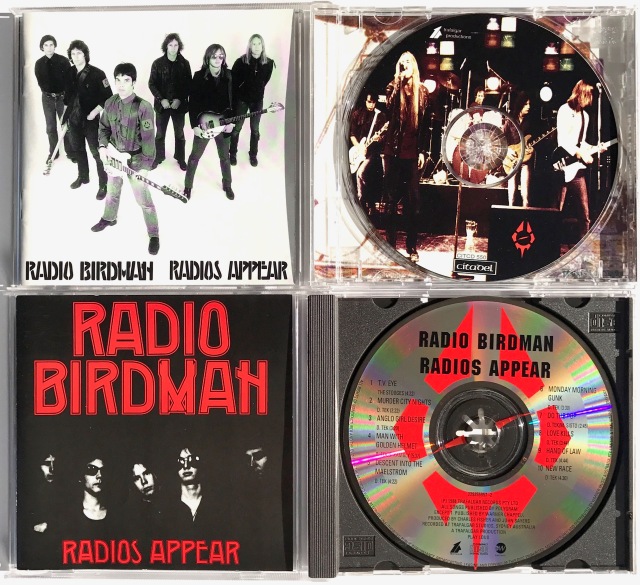 ← ATOMS OF EDGAR
HALF A CENTURY OF EXPERIENCE →