Considered to be the Big Bang of the Summer of Love, Monterey International Pop Music Festival (to present its full and rather ambitious name) was conceived and planned by a small group led by John Phillips of The Mamas and The Papas. Their hope was to give pop music the  status awarded to jazz and other musics having their own festivals. History shows that they succeeded admirably.

Boasting the first major US appearances by The Jimi Hendrix Experience, The Who and Indian classical musician Ravi Shankar, Monterey was also a watershed performance for Janis Joplin. One persistent story associated with the line-up is Hendrix and The Who being recommended by Paul McCartney, The Beatles having declined an invitation to attend. Given Beatles publicist Derek Taylor was one of the four original instigators, this is entirely plausible. And given the performances by both of those ‘British’ artists, both crowds and organisers cannot have been disappointed.

The 4-CD Rhino box set is a wonderful souvenir of the event for those not around San Francisco in June of 1967, which is, let’s face it, almost everyone. The capacity of the grounds was 7,000 people and an estimated 20,000 passed through across the five sessions between Friday evening and Sunday.

Boasting twenty artists and clocking in at a smidgin under five hours, this multi-disc set is pretty damn terrific. The sound is as good as you could expect for the time, while the diversity of the music really does exemplify the open-armed approach of both organisers and fans. Otis Redding and Jimi, Janis and Jefferson Airplane, Booker T and The Byrds; there are highlights galore, especially in some of the stage announcements.#

Often forgotten is the fact that the artists were not paid. You heard correctly: everyone performed for free*, with proceeds going to charity. Astonishingly, marvellously, the whole thing worked. An excerpt from a contemporary review said this:

The Flower Fuzz: Two weeks ago in Monterey there was an International Pop Festival. For Two and a half days people listened to music. They were almost all kids, and there wasn’t a moment of trouble. The cops were astonished.

Vinyl Connection recently picked up this super set for a song. If you come across it, I recommend you do the same. In the meantime, here are a few photos, interspersed with the artists on each disc.

# My favourite is one of the Byrds (McGuinn or Crosby?) quoting Paul McCartney’s suggestion that world peace could be assured if all politicians were given acid. Couldn’t make things worse, now could it?

* Except Ravi Shankar, who received US$3000 for his long afternoon sitar performance, and Country Joe and the Fish who got paid by DA Pennebaker for their appearance in his film. 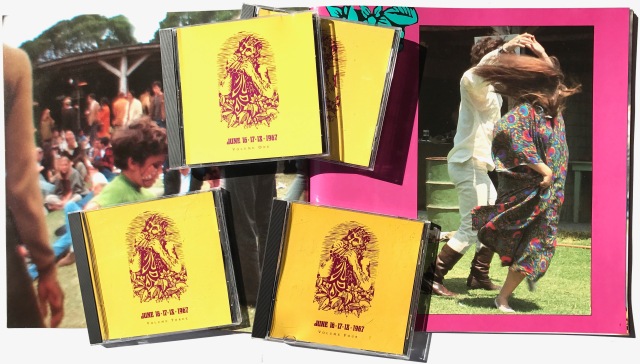 The Mamas & The Papas

The Mamas & The Papas—Festival Finale