IN THE SPOTLIGHT, SO CLEAR

It’s a Friday night in the late nineties. Steven and I are lounging around talking shit about music. A single slice of Capricciosa sits uneasily in the grease-stained box and half a bottle of red stands on the coffee table. The pizza gets ignored; we’re either too full or too polite to take it. Not so, the wine. I top up the glasses.

We’re talking about CDs because that was the time, that was the medium. When I bought a CD I’d divest myself of the vinyl unless there was a strong argument for retention. Historical importance, cover art, deep personal significance… these were reasons to keep. But many ended up in crates for the next Record Fair. Not Steven. His lounge—and indeed several other rooms—were lined with records. Largely ignored, gathering dust, they were silent unless drawn out of retirement by a conversation, an argument, a moment of collection-based triumph.

JB was soulless, but atmosphere wasn’t the attraction. You went to JB for the discounted CDs in the racks lining the footpath outside the store. Quality is good; cheap is sometimes better.

I chuckle. Steven raises an eyebrow.

I bought New Morning and Nashville Skyline last time I was there.

His turn to chuckle.

Those were the two I got.

Listened to them yet?

Nah. Probably won’t, either. Don’t really like Dylan that much.

Me neither. But they were really cheap, weren’t they?

Hard to resist Dylan for a fiver.

How many of his albums have you got?

Over a dozen for me.

We grin and clink glasses.

Imagine if we actually liked him.

What’s your favourite? Like, one you actually pull out and listen to now and then?

I don’t play it much these days, but at the time I was deeply impressed by Highway 61 Revisited.

There was often some sparring. Still is, now and then. Steven returns serve.

I guess Slow Train Coming would be your favourite?

Great sounding album. But no, my clear winner is Blood On The Tracks. God I flogged that album back in the day. 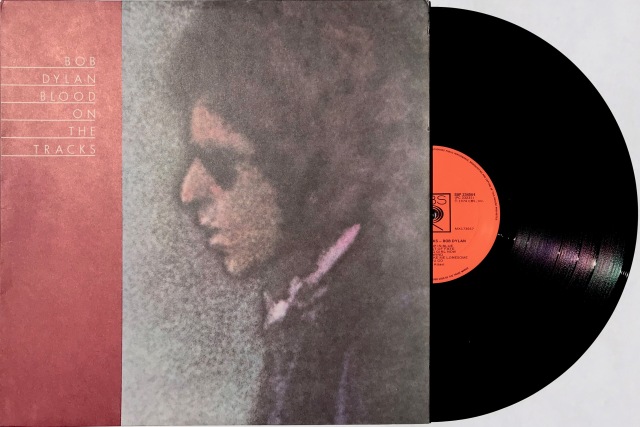 Back in the day when I was in my brief believer phase. Back when Dylan’s fans prayed for his conversion. How creepy, praying for a Jewish folk-singer to find Jesus. Kind of spiritual hypnotism by the masses. And it worked for a bit; see Slow Train Coming.

Blood On The Tracks was a precursor. The pilgrimage, the road to some kind of tangled up in blood redemption. Yet apart from “Shelter from the storm”, which becomes vividly New Testamental if you change the pronoun from female to male, Blood on the Tracks is about failing relationships, about wandering; a record of loneliness and alienation, an album of poetry and heartache and love. 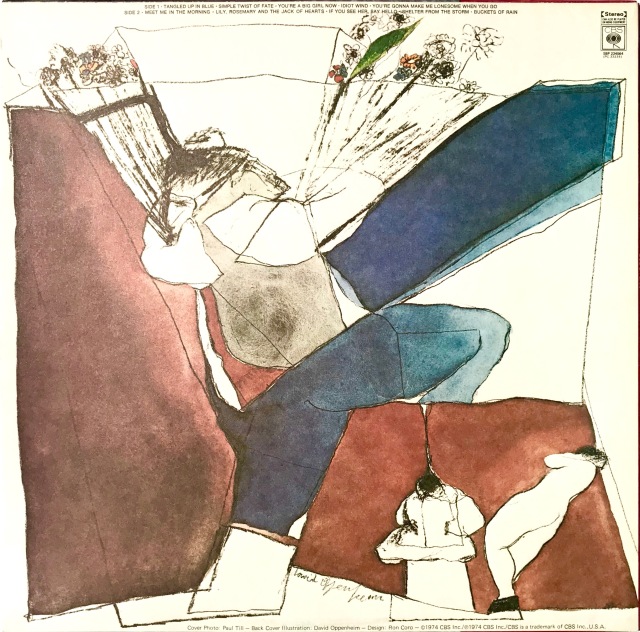 If that all sounds excessively introspective, think again. Sure there are songs of loss (the superb “If you see her, say hello”) and delight (“Buckets of rain”) but Dylan the story-teller is in fine form too, as demonstrated in album opener “Tangled up in blue”.

She was workin’ in a topless place

And I stopped in for a beer

I just kept lookin’ at the side of her face

In the spotlight so clear

And later on as the crowd thinned out

I’s just about to do the same

She was standing there in back of my chair

I muttered somethin’ underneath my breath

She studied the lines on my face

I must admit I felt a little uneasy

When she bent down to tie the lace of my shoe

Tangled up in blue

The emotions of these impressionistic tales are carried on memorable melodies and supported by subtle folk-rock arrangements. Lyrically, the pictures and portraits hint rather than point, though the opposite is true of the epic story “Lily, Rosemary and the Jack of Hearts”, the centrepiece of side two. Here Dylan embarks upon a long and sometimes convoluted story demanding real concentration if you want to follow the plot across its nine minutes and sixteen verses. Many don’t bother, preferring the plaintive symbolism of “Shelter from the storm” or the tense anger of “Idiot wind” (which I equally adore in its rocked-up Hard Rain version).

“Simple twist of fate” has a misty noir storyline infused with such tenderness you don’t register the devastating loneliness. The jaunty pessimism of “You’re gonna make me lonesome when you go” is wryly engaging. Even some of the lesser songs (the blues shuffle of “Meet me in the morning” or the patronising “You’re a big girl now”) work well enough in this company. Blood On The Tracks has so many superb songs and works so cohesively as an album that more than half the tracks have been my favourite at one time or another.

‘Blood on the Tracks’ Paperback poster print available from the Standard Designs shop, details below

God, I loved that album back in the day. So much so that I notionally compiled a parallel Blood On The Tracks consisting of different versions of the songs. The branch-line duplication never made it to disc as the Dylan albums in my collection were insufficient. This is as far as the tracks ran:

Tangled up in blue — The Bootleg Series Vol.2 /

You’re gonna make me lonesome when you go — ?

Lily, Rosemary and the Jack of Hearts — Joaquin Antique

If you see her, say hello — / TheBootleg Series Vol.3

Shelter from the storm — Hard Rain

*  Joaquin Antique is a bootleg LP

I’m sure there are Dylan fans out there who have undertaken—and completed—similar projects, but my attempt fell short by three songs. Mind you, I never asked Steven if he had any of the missing alternate versions. After all, he likes Dylan more than me… or has more albums, at least.

I still have my vinyl copy of Blood On The Tracks, acquired new back in 1975 when money was tight and an album was an investment. Now I’ve finished writing, I think I’ll sit down and give it a spin.

It’ll be the first time in twenty years. Might even open a bottle of red.

Check out the special post at Danica’s blog for the full Bobtopia experience.

← ARE YOU THE CENTRE OF THE UNIVERSE?
BOLD AS LOVE →