When it comes to choosing albums to write about, I’ve noticed a few trends. One—previously mentioned—is the difficulty in writing about a really special, favourite record. Something about the meaning, the importance, the desire to communicate the specialness; these somehow inhibit my fingers.

At the other end of the spectrum are those artists only known via one or two releases. How could anyone be presumptuous enough to write about an album when they have so little context? Cries of ‘Fraud! Imposter!’ echo in the distance.

While I continue to struggle with the first of these challenges, I want to engage with the second. After all, with a room full of music and more decades of listening than I care to enumerate, there is plenty of comparative ground. What’s more, I would be doing only what I constantly invite readers to do: try something new and/or different.

My knowledge of John Frusciante is negligible.

My knowledge of Red Hot Chilli Peppers, the band he played guitar in, is close to zero. Don’t own one album, never even heard a track. I think the bass player, the one with the insect nickname, is Australian, from Melbourne I believe. But I’m not sure.

So how, by all that’s ignorant, did I come to not only buy, but thoroughly enjoy John Frusciante’s 2001 album To Record Only Water For Ten Days? How come I’ve played eight times in a month? 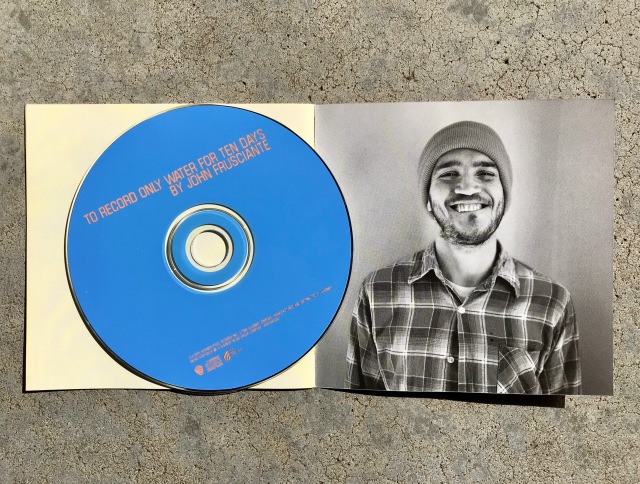 Blame a chance article and an impulse purchase.

Pitchfork is perhaps the most eclectic on-line music magazine I’ve encountered. Their weekly ‘in depth’ articles aim to go beyond the norm and feature a lesser known album, and that’s fine by me. After all, that was a start-up goal of Vinyl Connection.

A while back they featured To Record Only Water For Ten Days. A week later I was browsing the secondhand CD shelves at one of Melbourne’s record shops, and there it was. Clean and simple and eight dollars.

There’s a simplicity, a stripped back visibility to Only Water that transcends periods and styles, despite the heavy use of a vintage drum machine. Guitar is often acoustic, basic. (Not always, though. ‘Ramparts’ is a gorgeous 65 seconds of picked electric).

The vulnerability of Frusciante’s voice is engaging and often touching (eg: ‘Saturation’) but sometimes also powerful and strong (opening number ‘Going inside’). Great range too. Keening falsetto on ‘Wind up space’ and gravelly baritone on ‘Away & anywhere’ (which sounds like Dire Straits driving a rusty pick-up truck).

From the Pitchfork article I learned that he’d not been having an easy time with fame and fortune.

In 1998, when he was brought back to life by the doctors at Las Encinas Recovery Center, with a new set of teeth to replace the ones that rotted away from drug abuse and with skin implants over his abscessed arms, Frusciante approached this simple style as a guiding philosophy. “I’m not into being a guitar hero,” he said in 2001. “I like guitar players who are more clumsy and more awkward… and who are trying really hard.”

The ‘trying’ on Only Water is revealed in the light, deft sonic touches. Some synth here, a touch of electronic organ there. It’s thoughtful and pleasing. So are the songs; intimate, contained. There’s a kind of ragged hope permeating the album, fifteen songs wrapped in humble ambition: keep it simple, do the best you can.

Answers for the 60s Album Cover Quiz are now in the Comments under the post!