DADDY, WHERE DID PROG COME FROM?

Released in November 1968, Ars Longa Vita Brevis was the second album by The Nice. Their first, 1967’s The Thoughts of Emerlist Davjack, has some classic psychedelic songs (“Flower King of Flies” is a personal fave) and clear progressive characteristics, exemplified by Keith Emerson’s keyboard work on “Rondo”, but you could not call it a ‘progressive’ album; it’s too ’67.

In fact, even before their first recording The Nice were expanding the territory a pop band could inhabit. A marvellous archival recording for the Swedish Broadcasting Corporation from October 1967 includes the following:

A cover of Dylan’s “She belongs to me”

Pretty much covers the bases mentioned in the previous post, really. And all those elements are present on The Nice’s sophomore LP, with the progressive themes much more fully developed. 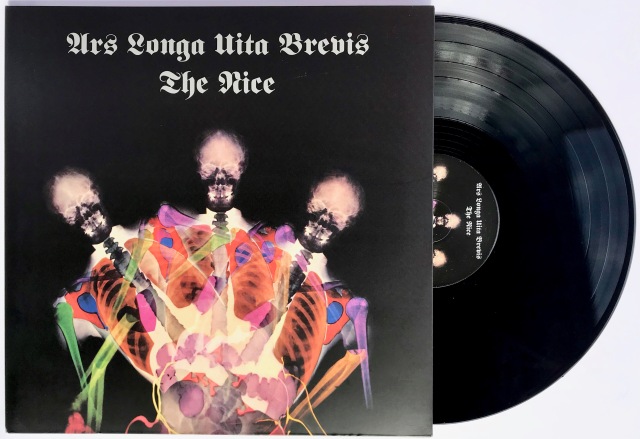 Ars Longa Vita Brevis is an LP with grand ambitions. While the Moody Blues employed an orchestra to lush up the pop poetry of their 1967 album Days of Future Past, in the title suite of their ’68 album, The Nice gave the world the first ‘rock group and orchestra’ excursion. What is more, I’d suggest that if you sequence the album in reverse you don’t have a ‘psych into prog’ LP, but in fact a bona fide progressive album with a couple of (psychedelic) songs thrown in. Here’s how it unfolds, backwards…

The “Ars Longa Vita Brevis” suite consists of a prelude (composed by Keith Emerson) featuring organ and the full orchestral surge, four movements (the third of which, “Brandenburger” was snitched from Bach) and a brief coda.

Each movement has a title (an affectation frequently utilised by Yes in the subsequent decade) and they segue together smoothly.

“Awakening” is, perhaps unfortunately, primarily a percussion solo from Brian Davidson. Still, there is a lightness of touch and luckily it doesn’t stay around too long (but quite long enough).

“Realisation” is the song-section, with the title—generally translated as ‘Art is long, Life is short’ and attributed to the Greek ‘Father of Medicine’ Hippocrates—leading off the verses penned by Lee Jackson. Guitar accompanies the beginning of this section, provided by the recently departed David O’List, before a lively (and trebly) drum-piano duel between Emerson and Davidson.

Johann Sebastian’s Brandenburg Concerto No.3 (Allegro) with orchestra (arr. The Nice) adds a rockingly Classical energy to the suite, though strictly speaking that should read Baroque. Nevertheless, although rocking up the classics had been done before and was certainly beaten to death in later years (not least by Emerson himself), here it sounds impressive. The trio playing is great and the orchestration (Robert Stewart) deft and complimentary. It’s easy to imagine JS himself might have wigged out to this, especially the bluesy bits.

The fourth movement, “Denial” is an organ driven trio section that could easily have come from the third Emerson Lake & Palmer album. Keith is in great form, the unit cooks, and a good proggy time is had by all until vocals remind us of the title and, as Emerson’s organ triplets fade, the orchestra returns for a big finale and you want to stand and applaud.

Leading off the other side of the LP (in our reverse programming) is Emerson’s arrangement of Sibelius’ “Intermezzo from the Karelia Suite”. Once again, you can hear the direction Emerson is heading and why. If you are a virtuoso keyboard player with limited compositional chops, re-inventing the works of others is one way to go. I really like this nine minute adventure: the martial drumming, the experimental organing, the pomp and strut of the whole.

That leaves three pop-psych songs to complete the album.

“Happy Freuds” is pure British psychedelia; quirky, full of cheek and dripping studio effects. The theme—self-awareness and pop psychology—amply demonstrates the desire to expand the lyrical template of popular music.

“Little Arabella” is an organ-driven barrelhouse romp about a hapless young woman about town who can’t quite get it together, possibly due to “the smoke coming out of her head”. This one is a companion piece to, say, “Jeremy Bender” (on Tarkus) or perhaps a second cousin to “The Continuing Story of Bungalow Bill” (from the ‘White Album’ released the same month).

Rounding out Ars Longa Vita Brevis is the wonderfully potty “Daddy, Where Did I Come From?”, an amusing song about trying to explain the facts of life. The lyrics are included below, but don’t quite capture the child’s contribution nor the desperate, terrified voice of the titular Dad. No wonder he turns to drink.

So I wonder why when the pie in the sky

Gets green at the edge, jumps a senile hedge

So I asked my ma, and she said ask your pa

And he said ask your ma, and wonders why his kids ask questions

So you fill me up with the gooseberry bush, and tales of the stork

And you tell me to hush when I ask questions

Daddy, where do I come from?

Well son, you rather caught your old dad on the hop

Mommy the flower, and your daddy sort of fornicates the flower

No son, you didn’t just grow in the garden

No, daddy didn’t pick you

No, you stayed with the flower

No daddy, the fertilisation occurs when the male seeds reach the female egg

With your back teeth floating in a gallon of booze

You can’t even work out how to fasten your shoes

You get yourself into such a state

You’re found drunk in charge of a roller skate

It’s a while since I’ve devoted so many lines to a single LP, but Ars Longa Vita Brevis is, I believe, a landmark album. Its interpolation of high culture into pop (Bach, Sibelius and a Latin title, thank you very much), its expanded lyrical concerns, the virtuoso (keyboard) playing; all these combine to earn this album a significant place in the story of progressive music.

The Nice are without doubt an important part of the answer to the question posed in the title.

© Bruce Jenkins / Vinyl Connection 2013-2019. Unauthorized use and/or duplication of this material without express and written permission from this blog’s author and/or owner is strictly prohibited. Excerpts and links may be used – in fact are encouraged – provided that full and clear credit is given to Bruce Jenkins/Vinyl Connection with appropriate and specific links back to the original content. Copyright is not claimed for images of album covers / LPs. Images are ‘fair use’ for the purpose of review and education.

← LIFE IS SHORT, ART IS LONG
YOUNG AND FRESH →