GIVING IT ALL AWAY

My mate Steven (writer of the Vinyl Connection Hendrix posts) passed on a copy of the ‘Old Grey Whistle Test’ DVDs. For those unfamiliar with this revered TV music show, it ran from 1971 to 1988 in the UK, featuring an eclectic array of rock artists performing in a tiny studio. The DVDs include comments from various presenters reminiscing about their time as the face of the Test, and a smattering of musicians recalling their own and others’ exploits.

Across a few months, I’d slip a disc into the player during lunch breaks on ‘work from home’ days. Like all these things, there were moments of jaw-dropping amazement and others decidedly ho-hum. That’s what you get with ‘eclectic’.

One segment I was tempted to skip over was Roger Daltrey talking about his first solo album, but I let it run, Roger’s earlier comments having been self-deprecating yet sincere. This time he spoke about how he’d built this studio at his house (mansion, more likely) and was looking to have it used. A young singer-songwriter yet to release an album hired time to do some demos and Mr D was so impressed he laughingly suggested the diminutive musician write him some songs.

Quicker than you could say Just A Boy, Leo Sayer came back to Roger with a bagful of songs that The Who singer promptly committed to tape with the help of Sayer’s band. The result was Daltrey, the first solo outing of the man most famous for swinging his microphone out front of the ‘orrible ‘oo.

A week or two later I happened across a well-used copy of the album. The price was right, the memory fresh; the necessary folding money was exchanged. 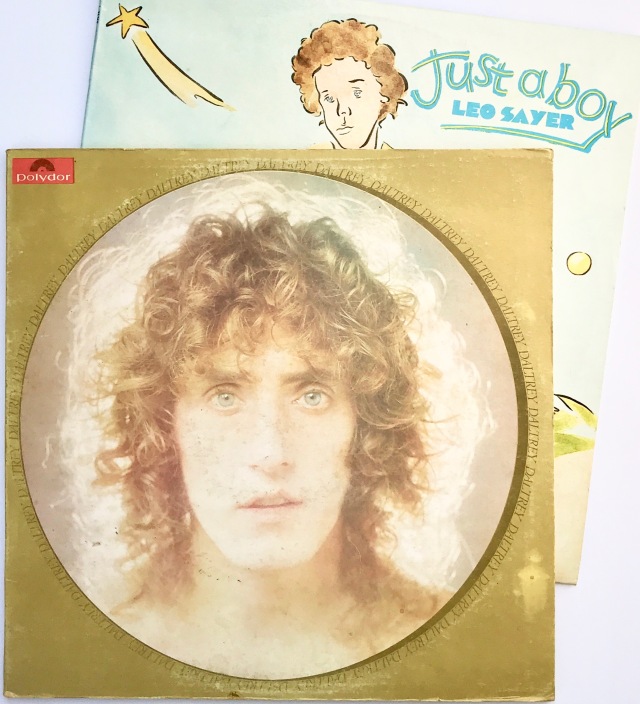 But Daltrey delivers. His version of ‘Giving it all away’ (the song’s lyric provided the title of Leo Sayer’s own subsequent album) is simply excellent. So is ‘One man band’. In fact the whole album is a very pleasant surprise; a collection of soft-rock songs, neatly arranged and showcasing Roger’s slightly husky voice. The tone is sometimes soulful, sometimes playful, with moments of emotion (‘When the music stops’) as if the man responsible for delivering Pete Townshend’s lyrics for the previous ten years was relishing some elbow room. I found myself relishing it too, and in the unanticipated position of being more than happy to recommend Daltrey to you, if you come across it.