What an amazing band XTC were. Few rock outfits have produced such an interesting and diverse catalogue of albums, nor shown the kind of growth and development the lads from Swindon demonstrated across fourteen albums between 1978 and 2000. From angular post-punk through 60s psychedelia to swoony pop classicism, Andy Partridge and Colin Moulding (the songwriters) have given fans dozens of memorable moments.

As with many substantial catalogues, some albums are better known than others. As luck would have it, their sixth album—Mummer, released in 1983—is a hidden gem; a transitional work that points the way towards the sublime pastoral beauty of Skylarking and the later Apple Venus. Andy Partridge had this to say: “Until early 1982, our work was like black-and-white TV. Mummer was the first in full colour—bright sky blue”.

For me it really is the start of phase two of XTC. The first five albums all had a trajectory to them. From the sharp and enthusiastic White Music to the very sophisticated and lavish-sounding English Settlement, each album builds on its predecessor—particularly in terms of songwriting and production. But Mummer suddenly sees them taking an unexpected sideways step. Their previous albums had no hint of the bucolic themes sprinkled throughout Mummer; ideas that would eventually blossom on Skylarking and Apple Venus. The Eastern melodies “Beating of Hearts” dabbles in are the precursors to “Garden of Earthly Delights” and “Greenman”. Even “Funk Pop A Roll” provides a clearer link than we’ve heard previously to the jingle-jangly power pop perfected in “Mayor of Simpleton” and “Earn Enough For Us”.

There is a sense of drawing breath with Mummer. The band had recently stopped touring due to its negative impact on Partridge.

Andy: Five years of solid touring ‘wigs out’ yours truly and the band comes off the road. The result was a record built in troubled times. Is he dead? Will they split? Have they lost it? The answer was no, no and no. Try a spoonful, out of the sour came forth the sweet.

Ryland: You’d think a band who were making such a radical decision (as ceasing touring) and were criticised by many for “committing commercial suicide” would make sure they came out with a really strong album. However, Mummer was not a commercial success, and although I enjoy it a lot it does sound vulnerable to me. Maybe that’s because I’m comparing it to its uber-confident predecessor. Listen to the starts of “Love On A Farmboy’s Wages” and “No Thugs In Our House” and hear the difference. Both start with a crescendo over a long sustained vocal note from Andy. On “Farmboy’s Wages” this note is gentle and pure, whereas in “No Thugs in Our House” it is a guttural, agitated but supremely self-assured howl. Andy talks of recovering from his nervous breakdown, sitting in his backyard and writing the songs that would become Mummer on an acoustic guitar. The songs are more gentle and this feeling pervades the majority of the album.

Mummer opens with the lurching, eastern tinged “Beating of Hearts”. Says Ryland: Louder than noises of hatred… louder than thoughts of dictators. My favourite track on the album. The arrangement is unique; the lyrics are genuine instead of trying  desperately to be funny or smart. And when that note enters at 0:52 it’s a sign of a typical Andy Partridge production eccentricity we are destined to experience much more of over subsequent albums.”

Perhaps because I haven’t spent as much time with the album, I’m drawn to the singles. The gentle, melodic “Wonderland” (a Colin Moulding song), the deliciously anachronistic “Love on a Farmboy’s Wages” and the deceptively complex “Great Fire”.

Two songs Ryland and I are in accord on are “Human Alchemy”, whose odd chanting and mysterious atmosphere are unlike anything else in the XTC catalogue, and the poetic “Me and the Wind”. Nature is again prominent as the rhythm sways and dances with strange overlays of almost jazz-like flutes and frantic pianos. Me and the wind are pushing kites and pulling trees. 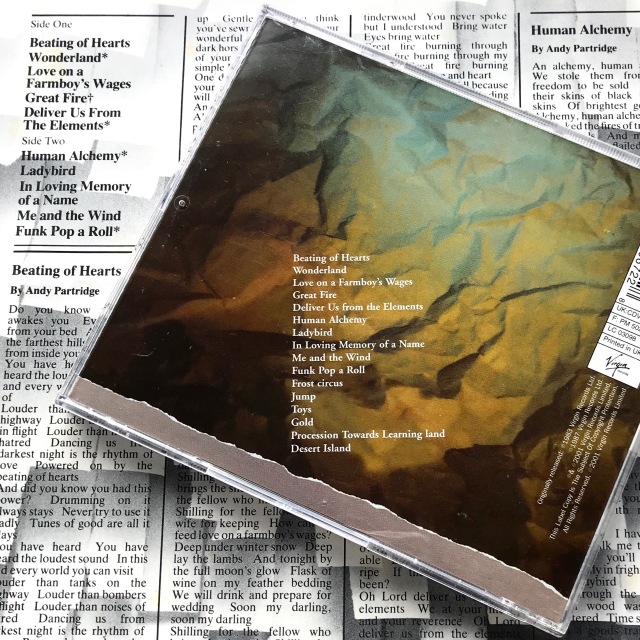 The original album finishes with “Funk Pop a Roll”. Ryland again: At the end of what has been a long and challenging listen Andy gives us an undeniable pop gem replete with plenty of ahhhhh wooooo‘s, chiming guitars and a vibrant drum beat that pump along as Andy wails about the futility of the music industry:

Funk pop a roll beats up my soul

For those not averse to little silver discs, the 2001 re-mastered CD adds a slew of worthwhile bonus tracks: B-sides from the time. Some are atmospheric (“Frost Circus”—that nature theme again) others pop-rock (“Jump”). But all six are worthwhile and I’d love to collect the original singles. But with my income, maybe I’ll stick to the one I have.

The introduction to the series is here

← THE ROAD GOES EVER ON
ALBUM COVER QUIZ – THE SEVENTIES →