True Colours was the fifth album by New Zealand band Split Enz. It is a lively, tuneful, sometimes edgy, sometimes melancholy pop rock treat.  The album’s first single ‘I Got You’, was supremely catchy, highly successful, and written by the latest addition to the band, twenty-one year old Neil Finn.

True Colours was recorded at Melbourne’s Armstrong Studios in the second half of 1979. With David Tickle (Blondie, The Knack) in the producer’s chair, the sound was simplified, stripped down, uncluttered… less piano, almost no audible percussion, simpler drum patterns. The result was certainly more radio friendly with two songs vying for the honour of first single release: the wistful ballad ‘I Hope I Never’ and ‘I Got You’. Both producer and label (Mushroom) pushed for the latter.

Album and single were released in Australia and New Zealand on 21st January 1980 with a Noel Crombie conceived film clip ready to roll. The track listing was:

In most places tracks 1 & 2 are swapped. The listing above is the original Mushroom (AUS) / Polydor (NZ) order.

The release of the LP in four different sleeves caused delight and consternation amongst fans. Yellow and blue, red and green, purple and yellow, blue and orange… what to buy? It was exciting and for those with limited resources, deeply frustrating. And after you decided and forked out your hard-earned, guess what? Another four sleeves appeared! Those of limited resources but unlimited obsessiveness haunted second-hand record stores in the hope of snaring another colour combo while sensible people just shrugged and remained satisfied with what they had.

But there is no fun in sensible and when the ‘laser-etched’ version was released, some of us bunnies sprang for that too. The ‘new’ technology, alleged to project interesting shapes around the room when reflecting a bright light, has not to my knowledge been used for LPs very much since. Probably because it is a silly idea.

Now here’s a piece of data that you will not find in the Wikipedia entry for True Colours. There was another cover. It was a fan-club only limited edition with no colours at all, just the geometric outlines.

Why would there be a colourless True Colours? So that fans could customise their copy of the album by painting their own hues. Yep, a DIY album sleeve. My source for this explanation is impeccable: I bought my copy from Peter Green, the long-serving fan club Grand Wazoo, at the club’s regular Record Fair stall back in the mid-90s. He gave me the explanation and he should know. Can’t say that I have ever been tempted to colour in my copy, but if I ever met Tim Finn I might just ask him to sign it, neatly, within the square.

As for the music, the album opens (downunder, anyway) with the tearing ‘Shark Attack’. This is Tim in angry-mode (check out earlier single ‘I See Red’) opening proceedings with a surge of energy. The single comes next (or first, for most of the world) and Rob Jones has covered that more than adequately.

Neil’s ‘What’s the Matter with You’ is a querulous, slightly paranoid mid-tempo rocker that carries echoes of the earlier, artier stuff. The wonky synth solo is great: just a bit unsettling and making the song one of this writer’s favourites. ‘Double Happy’ is an Eddie Raynor electro-pop instrumental that fades in, rattles along through a jumpy middle-eight, then rattles through to fade out with classy drumming throughout.

‘I Wouldn’t Dream of It’ is reflective with an odd, tinkly keyboard and a repetitive coda that somewhat overstays its welcome. The ballad ‘I Hope I Never’ was also released as a single, making the Top 20 in Australia but not troubling chart compilers elsewhere – other than Holland where it reached #30.

Side Two kicks off with ‘Nobody Takes Me Seriously’ another prime slice of Tim ranting, albeit with a more plaintive tone. The stop-start structure helps emphasise the interrupted connection between the singer and the world while the instrumental break’s jaunty tone helps undercut the self pity of the lyrics: ‘If there was a fire they’d just leave me to burn’.

One suspects that Tim was not a totally happy camper at the time of penning some of these songs. ‘Poor Boy’ also has a pitiable feel as the protagonist finds solace in a radio-driven romantic fantasy. Still it is a wonderful song, with Eddie Raynor’s synths adding colour and texture as the ‘Oo Hoo’ voices drift through space.

Neil’s ‘Missing Person’ also tackles alienation, but there is an upbeat tone, more agency and urgency in the song as he wanders, walks and ‘can’t stand still’. Neil is only missing because he wants to be.

Last song before the bright closing instrumental ‘The Choral Sea’ is Tim’s ‘How Can I Resist Her’, a solid pop alt-love-song whose highlight is the upping of intensity just before the guitar solo (and the solo itself is pretty good too).

It is a great album, an opinion supported by its ranking in the 2010 book “100 Best Australian Albums” at #22. For those wondering how a New Zealand act makes it into an Australian ‘best of’ list, I don’t really want to go there. We’d end up discussing those ‘American’ artists Neil Young and Joni Mitchell and tears would be shed.

Suffice to say, True Colours would be well placed in my Pacific Region Top Ten.

To the delight of fans, four different re-issues of True Colours were released in the year of the album’s 40th anniversary, all on (true) coloured vinyl.

Of course, your correspondent had to get them all, not least to share a photo. 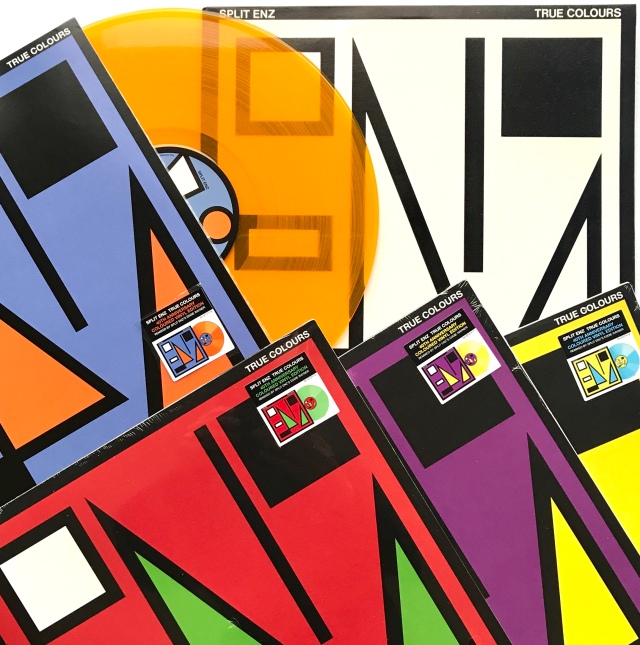 Unauthorised use and/or duplication of this material without express and written permission from this blog’s author and/or owner is strictly prohibited. Excerpts and links may be used, provided that full and clear credit is given to Bruce Jenkins/Vinyl Connection with appropriate and specific links back to the original content. Copyright is not claimed for images of album covers / LPs.