Neil Finn has been part of the landscape of popular music for a very long time. This being a public sort of life, fans get to go along for the ride; turning the pages of the album from the cheeky faced Split Enz teenager to the handsomely greying solo veteran. And there was that band of his along the way. Crowded House, they were called. Wrote good tunes; had some success here and there.

How does a musician stay fresh over such the span of years? Part of the Finn modus operandi has been to move on from projects when they no longer engage him. Another strategy has been connecting with other musicians, from periodic projects with brother Tim to enduring links with both local and international artists. I would imagine, too, that having musician children and a musical partner (see the Pajama Club) keeps things lively at home.

Alternately, one can simply ignore change. There are artists aplenty who happily churn out variants on their original ideas decade after decade, maintaining their market niche and satisfying fans supine in the comfort and stability of the known. It’s a very boring strategy. The superannuation grows but the soul shrinks.

Yet when artists do break their own mould, when they branch out, reach over, jump sideways or simply wander down a different track, we may not like it. Perhaps it is not just fans of Status Quo who like things predictable and safe. Last year, for example, so many people told me that the new Flaming Lips album was rubbish that I didn’t bother buying it. As a long-term admirer, I didn’t want the disappointment. Yet when I finally did acquire The Terror and spent some time with it, I was transported. Admittedly, not always to a comfortable and cheerful place, but I was engaged, moved, intrigued and entertained. Not a bad result, wouldn’t you agree? My guess is that the problem for many listeners was that it didn’t sound like the Lips they’d come to love.

So if you are a master songwriter who has been known to channel both the melody of McCartney and the grit of Lennon as richly as anyone of his generation, what do you do? Neil Finn has taken the road less travelled and, if you can dump your expectations by the crossroads, you will be rewarded if you join him.

Dizzy Heights sounds contemporary. Production is clean and bright, the sound is spacious. Sprinkled throughout are little electronic flourishes that, for a fan of things that swish and ping, add aural interest. There is a groove in a number of songs that makes one think of New York (and not because of the title of the final song). But for Finn Followers the most striking thing on first listen will be that it doesn’t sound like Neil. He seems to be singing in his upper register with female backing vocals and added effects that powerfully evoke the Lips Wayne Coyne. It is no surprise to discover that the album was produced by Dave Fridmann who was in the production chair for (amongst other things) the Flaming Lips masterpiece The Soft Bulletin. On Dizzy Heights it is not until fifth track ‘Better than TV’ that one goes, ‘Ah! That’s the Neil Finn I know’.

Before that we have impressionistic opener, er, ‘Impressions’, the lush, soulful title track, the Steely Dan meets Michael Franks groove of ‘Flying in the face of love’ and ‘Divebomber’. This last begins with atmospheric swathes of strings and synths. I’d challenge anyone who knows the Flaming Lips to not think of that restless and exploratory band when listening to this piece.

Sun is overhead – Target down below

It’s going to be a wreck alright

The ending is questioning, melancholic, unresolved.

No doubt a subtle reference to ‘Fall at your feet’. Or ‘Nails in my feet’. Or an advert for his Chiropodist.

‘Better than TV’ is ‘Mean to me’ for 2014, but more subdued. Not sure about the strings on this one; it may bite when played live with some overloaded guitar. The first side is completed by ‘Pony ride’, a more straight ahead rocker that would make a terrific ‘alt rock’ single. This is the first head-nodding foot-stomping moment and reminds you what a fucking great rocker Neil Finn is. It’s a welcome burst of energy that perhaps has the undesired effect of making what has come before seem a little pale by comparison. Still, it’s a great end to the side.

Added effects and electronics give ‘White lies and alibis’ an unsettled momentum that belies the groove. It’s a fine introspective song that (as writewyattuk observed in his excellent review of Dizzy Heights) could be a treated out-take from Together Alone (the outstanding 1993 Crowded House album).

Solitude is hard to find

And they’re all too busy

But it’s people that you lose

When you become a recluse

The gentle string accompaniment that opens ‘In my blood’ has one reaching for the term ‘McCartneyesque’. As the song gathers pace, however, you know you are in Finn’s own backyard, not anyone else’s.

Ambient sounds and piano drift through the closer ‘Lights of New York’. The space and vulnerability reminded Vinyl Connection of the melancholic sweetness of Paul Buchanan (The Blue Nile) and as the strings fade away one is left in a quiet, reflective place. 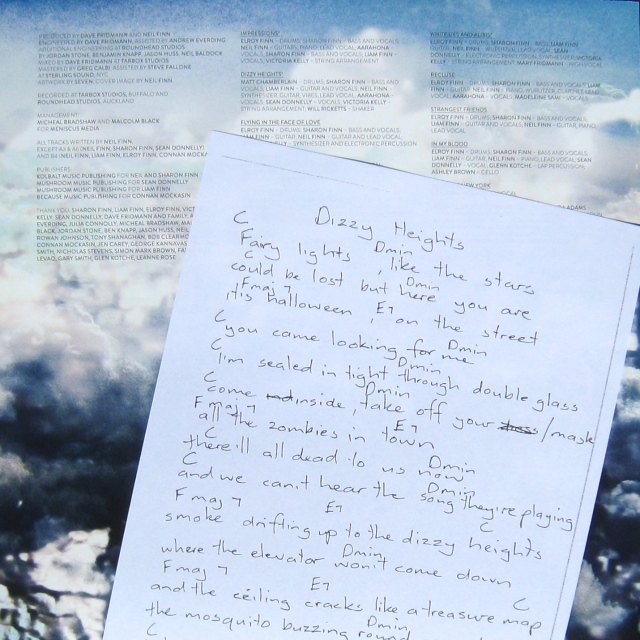 Fans of Crowdies sing-alongs might have to work quite hard to access Dizzy Heights. (Though if you take that literally and want to give it a whirl you can download a neat set of handwritten lyrics from the Neil Finn website. Aspiring Finn-buskers will be pleased to note the inclusion of guitar chords.)

For those open to change and some genteel sonic adventure there is much to enjoy here. Perhaps the veteran songwriter has not scaled dizzy heights with this album but he is most definitely airborne and achieving a new perspective on familiar terrain. The view is worthwhile.