BIRTH AND DEATH OF A WORLD

Not long ago I wrote about an unscheduled month in the UK in the late 90s. A side trip to Wales was mentioned and that is where our story begins today.

Every music tragic knows that it is not civic architecture or religious edifices that get the music hunter-gatherer’s pulse a-quickening; it’s record shops. We can smell ‘em. We can hear their siren call through the most confusing urban cacophony. We can see them with an acuity of peripheral vision that would make Jackie Chan stand open-mouthed.

“Perhaps I’ll wander down this nondescript lane,” we think to ourselves or casually comment to a long-suffering partner… when in fact we’ve glimpsed a bearded gent scuttling past clutching a plastic bag of well-known dimensions or spied a telltale black disc on a weather-worn sign.

No surprises, then,  that in Bangor’s High Street I found the almost famous Cob Records. Did I enter with excitement and trepidation? Silly question. (Though there wasn’t a sale on). 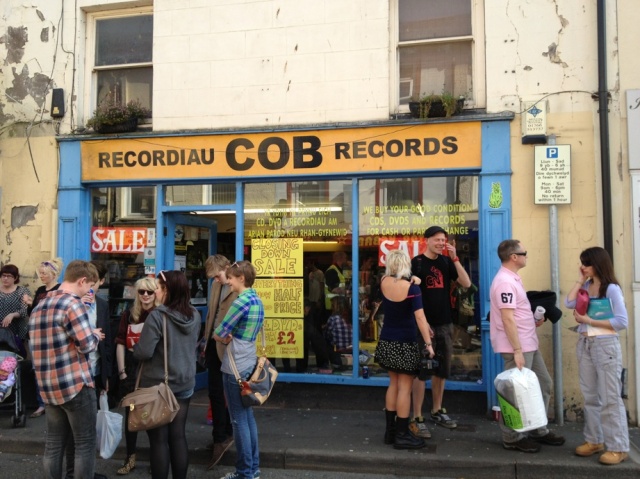 At the time I was in a phase of accumulating CDs and shedding LPs, a foolish decade-long purge that is now costing a bundle in the vinyl buy-back program. There was a rule operating back then: if the CD is purchased, the vinyl goes. Unbelievable foolishness; I’m paying for my stupidity now. So I did not buy vinyl at Cob Records*…

It was fun to browse and restraint was exercised. An hour later I exited with a little plastic bag containing one CD: Pentateuch of the Cosmogony: The Birth and Death of a World.

Dave Greenslade played in Colosseum before forming his own band in the 70s called, er,  Greenslade. Their 1973 debut is a beaut. Lashings of organ and synths (that’s what Dave does) and amongst the well-wrought instrumentals, some engaging songs delivered in the unique whiney (in a good way) voice of Dave Lawson. Dave L’s take on the prog lyric is refreshingly devoid of Yes-like philosophical conceits. Try this from “What are you doin’ to me?”

You led me a dance that my feet didn’t see

That wasn’t the vicar that you had to tea

I subsequently sought out and enjoyed all the Greenslade albums and, as you do, thirsted for more. Dave’s solo albums were the logical extension and 1976’s Cactus Choir was more than acceptable.

His next outing was a 1979 collaboration with artist/writer Patrick Woodroffe, the preposterously named Pentateuch of the Cosmogony. A double album on a single CD with a fat full-colour booklet. I knew about the CD release but had never seen it.

So I bought it in Bangor on that Wednesday afternoon in July.

I already owned it on vinyl.

“So what?” you cry, “You have just been blathering on about purging vinyl.”

Well, I was not being entirely honest. There was a get-out clause to the purge policy. The small print stated that an album could be retained under certain conditions:

(a)  Some powerful sentimental attachment (Eg: Atomic Rooster’s Death Walks Behind You, the first LP I owned)

(b)  There was something special about the packaging or cover (Eg: Jethro Tull’s Stand Up with the cutout in the gatefold that stands up)

Pentateuch did not meet the first criterion but it sure as hell blitzed the second. The album came in a 12” square book containing an entire short story and a lavish collection of fantasy illustrations. It is a magnificent folly and a vinyl artifact to be treasured.

As I re-read the above tirade, I wonder about the venom. The flatness attending a disappointing album is known to all music fans. But the frustration is massively magnified when you know that THERE IS NO MORE. This is it. The final catalogue item by this artist you venerate, whose work has transported and delighted. It is almost rage. “How dare you leave me this way! How very dare you!”. Such personalization is, of course, a big part of the reason why musicians desperately avoid ever meeting fans. What sane person  wants to hear such bile? Or deserves to? 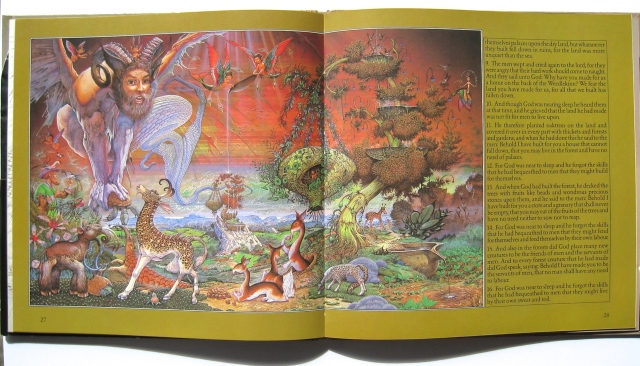 Back to Cosmogony. (It is a real word, you know). When I first listened to the vinyl I was crestfallen. But forgiveness came via the breathtaking excess of the package and because Mr. Greenslade is a fine musician whose records have brought considerable pleasure. But I never listened to any of its four sides again.

And after I carted the CD back across the world I only listened to that once too, hoping against hope I’d discover a terrible misjudgment. Nope. It is playing again as I type and though I’d love to provide a happy ending by revealing that I’ve seen the light and Pentateuch of the Cosmogony is a lost classic, that ain’t gonna happen. Time has not softened the disappointment. But neither have I sold either version of the album.

Have a listen to “What are you doin’ to me?” by Greenslade. It’s terrific.

*  Nor, sadly, can anyone now because Cob Records closed in May 2012. Another fine store bites the dust.