ALL HOPPED UP AND READY TO GO

Part of the energizing outré CBGBs scene in mid-70s New York, the Ramones story is well known. How a lanky outsider by the name of Jeffrey Hyman linked up with Douglas Colvin and Johnny Cummings to form a three-piece called Ramones. Band manager Thomas Erdelyi recalled ‘they were terrible. It was the worst thing I’ve ever heard. But they had something.’ (Heylin, p.20)

Jeffrey became Joey and moved out from behind the drums to the microphone.

Douglas became Dee Dee, played bass, and is credited with the name.

Johnny was on guitar. He provided the dress code.

A suitable drummer was proving elusive until it dawned on those present that rather than showing aspirants how do play, Thomas Erdelyi should just do it himself. Hello Tommy. 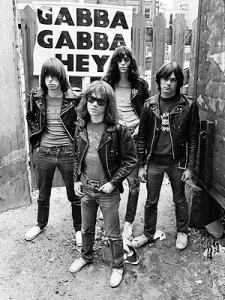 Sixties mover and shaker Barry Miles was on the dinner circuit throughout the 70s. In his memoir he relates a conversation about the band name with Dee Dee, who called himself Ramone even before the band was formed.

I told (Dee Dee) that Paul (McCartney) once told me that the name Paul Ramon was a take-off on the name of society hairdresser Raymond Cohen, known as Mr Teasy Weasy, who demonstrated ladies’ hairstyles on television in the fifties. Paul like him because he was an impossibly suave-looking fellow with slicked-back hair and a pencil moustache. Dee Dee was delighted because he had previously worked as a beautician’s assistant in a beauty salon. (Miles, p.249-50)

With disarming candour, Dee Dee observed (Heylin) that in 1974 when the initial trio formed ‘we started trying to figure out songs from records – and we couldn’t.’ It is not unfair to observe that a big part of the bargain basement simplicity stemmed from basement level skills. This refusal to be limited by an absence of musical ability was a core part of the UK punk aesthetic that emerged a short time later.

Gigs improved their competence but did nothing to slow down the amphetamine drive of the stripped-down rock and roll. Dressed in leather and torn jeans, racing through their set of twenty–odd songs in just over half and hour, they caught the attention of industry types who offered them a deal. The gob-smacking first album was released on April 23rd 1976. For a recent appreciation, I recommend the entertaining Mr 1537.

The third Ramones album was released on November 4th, 1977 on the Sire label. It is more produced than that arresting debut, yet is undeniably another classic.

After several strong coffees I decided to add urgency by reviewing while simultaneously listening and to limit the writing to the duration of the album: 32 minutes and 12 seconds. 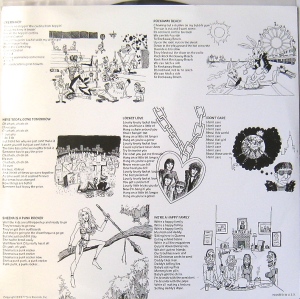 Can’t think, can’t dance, can’t count; but you just have to be one of them.

PS. The word apparently comes from 18th C French and is related to the word Christian; it suggests that even the imperfect cretins (the outsiders?) are human.

What a fist-punching grin-making rip-snorter of a single. There is no justice that it only got to #66 on the Billboard Chart. As an extra added bonus it even has a stop/pause moment.

A sad and sensitive break-up song. But how caring really? ‘Someone had to pay the price’ but I suspect it was not the singer. Crocodile tears ahoy!

Filler. (Probably deserves more, but I was checking the derivation of cretin).

A brilliant piece of post-Nietzsche nihilism in a minute-and-a-half.

I don’t care / About this world   (global alienation)

I don’t care / About that girl   (relational deadness)

I don’t care / About these words   (despair with his art, himself)

Another sky-rocket single launching from the gritty urban desperation of the oppressed workers. What’s that? The band members weren’t from penurious working class families? Middle WHAT?! Eh, who cares?

The kids are all hopped up and ready to go

The inner sleeve drawing of the eponymous heroine looks more like a Tarzan wet dream than a proto-punk, but who cares about that either?

Joey and his brother grew up with three different dads;  he was diagnosed with OCD at 18.  Happy families?

Baby’s got the chills 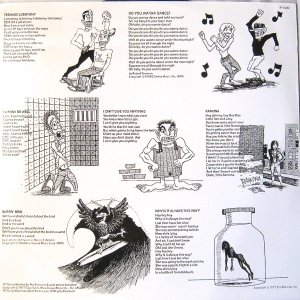 Gloriously daft. Here’s a challenge: try not to smile as you read this couplet…

Now I guess I’ll have to tell ‘em

That I got no cerebellum

Never has psychiatric surgery been such fun! Charges straight into…

The first of the two covers. Works remarkably well speeded up.

Reminiscent of ‘I wanna be your boyfriend’ from the first album but this time our protagonist wants to be free of pesticides, hallucinogens and perhaps psychotropic medication.

Check the poor sod on the inner sleeve: freaking out in a padded cell with barred windows.

I wanna dance (but)

A song for the disenfranchised.

A song as punky-sweet as the titular girl. But the dark heart here is a lesson in how vulnerability leads to pain.

I let her in and I started to cry

And then I knew I wanted to die

Or is Ramona the Ramones anima? Could the song be an autobiography of the band?

Another deft choice of covers, though to these ears less chirpy, more menacing than the 1963 original by The Trashmen. The rhythm section of Tommy and Dee Dee shines.

The ultimate pogo-party album wraps up with a cheerful 2 ½ minutes about suicide and immovable grief. Or perhaps murder by persons unknown while on the way to the laundrette. Again, check the drawing and final line.

It is odd how really focussing on this album revealed a great deal more than the good-time thrash of ‘Sheena’ and ‘Rockaway Beach’. There is a depth to the ‘cartoon’ lyrics that points towards something much less cheerful but much more real. Meanwhile the leather and denim uniforms and ‘dumb bratiness’ (Savage) distract from some trenchant observations on the human condition.

I think I love Rocket To Russia more as a result but if you just wanna dance under the moonlight, don’t study the lyrics. 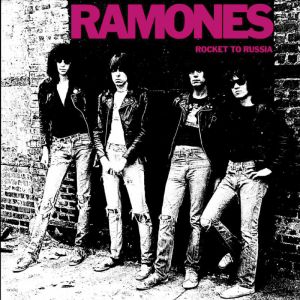 Barry Miles “In The Seventies: Adventures in the Counterculture” (Serpent’s Tail, London, 2011)

+ Not a Ramones lyric