A rainy night in Glasgow, early 1980s. Three university students are making music together; writing songs, practicing, discarding, straining for the moment when something soars. The more they leave out the closer it approaches what they imagine. They persevere.

The Linn company was formed in 1973 to produce the legendary Sondek LP12 turntable. The story goes that engineer dissatisfaction with available test LPs led to the company forming Linn Records as an adjunct to the audio component business. The first album released, LKH 1, was A Walk Across The Rooftops by The Blue Nile, released in April 1984.

Lift the window in the attic studio; lean out. The smell of rain on asphalt. Streetlights cast woozy reflections in gutter pools; oil-slick rainbows throw sleazy arms around sullen puddles. The dark street is pock-marked with motionless, vacant-eyed cars. Hunched dots, coated against the weather, creep home. When the rain stops you come up for air.

There is no fanfare. The title track does not so much begin as sidle on-stage with a quiet keyboard sequence punctuated with a muted industrial crash and a melancholy trumpet. Voice, drums, bass step forward, unhurried. ‘I am in love’ he sings, wistful rather than elated. The strings play a repetitive see-saw that leans closer to Hitchcock than honey. He sings ‘I am in love with you’ but I hear ‘I am alone with you’.

The lights are always changing

The black and white horizon

I leave the redstone building

And walk across the rooftops

Nigel Thomas was drummer on the album and worked extensively with the band.

Engineer Calum Malcolm is deservedly regarded as a key contributor to the sound.

The strings are back for ‘Tinseltown in the rain’ but again, the landscape is more austere than lush. This is one of two up-tempo tracks on what is a decidedly low-key album. You are struck by the spaciousness of the arrangements. It is emblematic that this (almost) foot-tapping song has such a down-beat title.

On the journey ‘From rags to riches’ the soaring tenor of Paul Buchanan somehow manages to sound both compelling and vulnerable, poignant yet sinewy. A hollow repetitive drum beat – sounding rather like a mic-ed up oil drum – is accompanied by sequenced marimba flurries and other atmospheric sounds. There is a long instrumental coda that evokes Peter Gabriel’s mid-80s music. It is mesmerizing.

The year the first Blue Nile album was released was also the year when CDs really took off. Few albums of the time demonstrated the art of audio production and clean digital sound better than A Walk Across The Rooftops. The CD became a Hi-Fi salesman’s best friend. 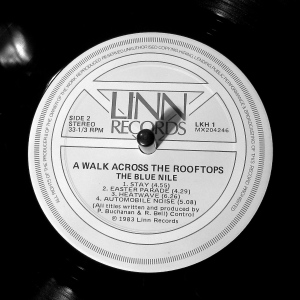 Side Two opens with the (almost) jaunty ‘Stay’. Here’s a chap who doesn’t make swaggering promises of priapic ecstasy. No, this is a thoughtful, considered love.

Stay… And I will understand you

‘Easter Parade’ is a gentle ballad, a watercolour observation or reminisce. You are invited forward into the painting; a space into which tonal colours creep like arriving dawn. Behind the piano drifts a quiet string line and a wash of translucent synth noise.

In 1995, just prior to the release of Peace At Last, Paul Buchanan said in a Mojo interview, ‘Like everybody, I write 9 bad songs for every good one – make that 19 in my case! – but I’ve written so many now that there’s a few good ones in there.’

‘You know, Glasgow is just a small Northern European city. The people are good and they’re nice and they’re very interactive. There’s a lot of to-ing and fro-ing in the street. People are quite open with each other,’ he says. ‘And it rains a lot. Really, really rains a lot. And that’s about it.’

‘Heatwave’ has more of that exotic combination of sequenced repetition and tremulous human searching. The way the voice soars over the synth lines and (almost) drum-machine rhythms is thrilling. And plaintive. There may be a heatwave but keep a blanket handy.

Are we rich or are we poor

The final song begins with a fragmented percussion pattern where each sound is played sequentially. Piano and voice enter. He’s watching from a vantage point; maybe above, certainly apart. The ‘Automobile Noise’ is quiet but relentless, deadening.

There is a resignation; perhaps he’s ground down by industrialized drudgery.

I am weary of this fighting

But, like all the songs on this album there is more than a glorious melancholy. The rain does stop, the sky does clear.

Walk in the headlights

And you find yourself richer, more human.

[Links are to iTunes. Any purchase supports Vinyl Connection]