Being an ambitious but ultimately ludicrous attempt to summarise the early days of  blues legend John Mayall. Skip to Chapter Three if uninterested in early British blues.

John Mayall and the Bluesbreakers started playing London’s famous Marquee Club in late 1963. In the following year they released a first single and backed John Lee Hooker on his British tour. In April 1965, just after his 20th birthday, Eric Clapton joined the Bluesbreakers. After some lightning membership shuffles and lots of in and out and round about, the seminal Bluesbreakers with Eric Clapton album was recorded and released in July 1966. It did rather well at the time – rising to a chart position of #6 –  and is worthy of a place in any serious record collection.

Later that year, Clapton left and Peter Green returned. (Can you see I’ve left a bit out there? It really was a complex dance of players and playing). A Hard Road was released in February 1967. This is the definitive ‘Peter Green with Mayall’ album and another essential from Mr Mayall’s catalogue. Most of the Bluesbreakers were released around this time too – or rather buggered off to form Fleetwood Mac – but Mayall, undismayed, recorded The Blues Alone pretty much on his own. In July ’67 the album Crusade was recorded, introducing new guitarist Mick Taylor who was 18 at the time. Mr Mayall liked his guitarists young and fresh. Anyway, they went out on the road and toured extensively, the shows being captured on a portable tape recorder.

Chapter Two: A New Year, A New Clutch of Albums

Being more about bands and incubators

Early 1968 saw the release of two volumes of The Diary of a Band, culled from Mayall’s live recordings. Andy Fraser put in a brief work experience stint before joining Free. Then there was a new touring band, more road trips and the recording of the Bare Wires album in April. This Bluesbreakers line-up included Jon Hisemen on drums and Dick Heckstall-Smith on saxes, soon to form Colosseum. The role of Mayall bands as incubators for new combinations is impressive, isn’t it? At this point Mayall disbanded the Bluesbreakers, though he kept Mick Taylor on the payroll.

By now you are probably panting with the effort of keeping up with this swirling blues ecosystem and its ever shifting cast of players. Need a break? John Mayall thought so and booked himself a holiday. He opted for the warmth and hedonistic delights of the West Coast of the US of A, touching down in LA around the middle of 1968. 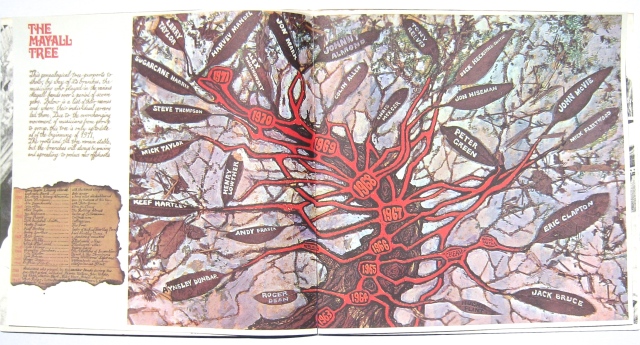 The Mayall Tree (from the album Back To The Roots)

Being an imaginary holiday journal of the gregarious Mr M.

♦ Phew, what a cool place. Just walkin’ around gives me a buzz. Makes me randy too. Actually, just walkin’ around often makes me randy, especially when the sun is out. Anyway, first things first: digs. Not as in “I really dig yer blues, man” but a place to hang out and sleep and make out with chicks.

♠ OK. Pad sorted. Laurel Canyon is the place to be and I am so here. Visit some neighbours. Frank and Gail are cool. Those GTOs are amazing (and a bit scary). Moon Unit cute as a button. Funny name though.

♣ Some of these chicks just aren’t evolved enough. Need to hang out with some brothers. Visit Canned Heat, spin some black wax. Got ramblin’ on my mind. Again.

♦ Found someone super hot. Did a bit of chasin’. Result.

♦ Headin’ back to Londinium tomorrow. It’s a hard road. Got some great song sketches though. Must call up Mick T and book some studio time. 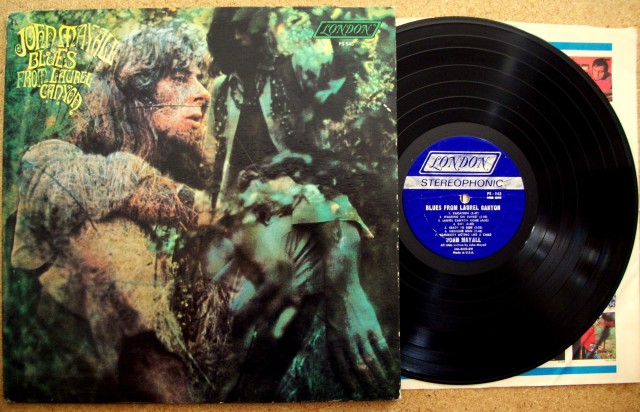 Photos of LP courtesy of sinistersaladmusikal

There are a dozen songs on Blues From Laurel Canyon, telling the story of John’s holiday in endearingly candid detail. The fantasy diary above is, in fact, a précis of each song. It’s like being shown a slide show of someone’s holiday while you have a few drinks and they regale you with amusing, boastful, intimate or just plain embarrassing stories. It is so much fun.

The plans form in ‘Vacation’, complete with aeroplane sounds and an early ripsnorter of a Mick Taylor solo. On arrival, we segue straight into the boogie bounce of ‘Walking on Sunset’, followed by a slow piano blues as John finds his temporary home and sinks into the new environment. The visit to the Zappas is chronicled in a medium-paced electric boogie with a nice slide solo from MT and a chirpy harmonica break from the boss.

Things get slow and sleazy as John takes his mojo out dancing in ‘Ready to ride’. Lovin’ he does indeed get, but with an added extra: an STD. The slow toms of ‘Medicine Man’ set a quiet rhythmic pulse as John ruefully reflects upon his bad luck and the necessity of staying ‘out of circulation’. His harmonica is quite teary (but it’s hard not to chuckle, unsympathetically, “Serves you right you randy old git”). Side One closes out with the boogie shuffle of ‘Somebody’s acting like a child’. I often feel quite uncomfortable about how Mayall writes about women, so I’m not going to linger on this one. Suffice to say that for all the hippy free love 60s shtick, it often comes across as patriarchal, patronising and more than a little self-centred.

Click the image to visit Marco’s blog. The pics and info are great and there are clips of songs from the album to watch/listen to

The mid-paced electric boogie of ‘The Bear’ is a lyrical and musical homage to the mighty Canned Heat. Sure, it’s name-dropping again, but upbeat and fun with some barrelhouse piano from JM. ‘Miss James’ and ‘First time alone’ plot his pursuit and congress with a lady who, it is said, was a notable ‘groupie’ on the LA scene. The first is a bouncy, organ driven blues while the next is full of late night atmospherics. ‘Long gone midnight’ is a slow blues of longing with a short sweet MT solo. The last song, ‘Fly tomorrow’, slowly unfolds to complete the autobiographical cycle as John heads home.

Chapter Five: Context is all

Being an explanation for all this rambling

When I went to live in Mainz, Germany in mid-1996 I took only a handful of CDs, figuring that perhaps clothes were more important. Reading and entertainment were provided by locally sourced copies of Mojo magazine, its pages providing hours of escape from learning German vocabulary. After publishing an article entitled ‘100 Best Guitar Solos – Ever’ Mojo invited readers to submit a brief argument/example supporting their case for any omissions. With the vast majority of the Vinyl Connection library in a Melbourne storage facility the options were severely limited and my chance of Mojo glory seemed slim… until I spied amongst the meagre travelling collection Blues from Laurel Canyon.

John Mayall was born in Macclesfield, UK, on the 29th of November 1933.

Congratulations, Mr Mayall. Hope you are still enjoying life on the West Coast.