Eric Clapton and girlfriend Charlotte Martin were at London musician’s club The Speakeasy in Spring 1967. It was the same club where, not long previously, Eric had his first taste of LSD in circumstances that were probably not your average first trip, even in that much mythologized year.

The way Eric tells it, ‘the Beatles came in with an acetate of their new album, Sgt Pepper’s Lonely Hearts Club Band’. Someone handed out pills of ‘superstrong acid’ and before you could say ‘Lucy in the sky’, everybody was interpretive-dancing to the new sounds of the year’s most iconic album. With admirable understatement, Clapton admitted, ‘I was pretty moved by the whole thing’.

Another night at ‘the Speak’ they were joined by Charlotte’s Australian friend Martin Sharp, an artist who did some versifying on the side. Eric takes up the story.

‘When he heard I was a musician, he told me that he had written a poem which he thought would make good lyrics for a song. As it happened I had in my mind at that moment an idea inspired by a favourite song of mine by the Lovin’ Spoonful called “Summer in The City”, so I asked him to show me the words. He wrote them down in a napkin and gave them to me.’ [p. 90]

You thought the leaden winter would bring you down forever,

But you rode upon a steamer to the  violence of the sun.

And the colours of the sea blind your eyes with trembling mermaids,

And you touch the distant beaches with tales of brave Ulysses.

By the beginning of May, Eric was in New York with bandmates Jack Bruce and Ginger Baker recording the second Cream album. “Tales of Brave Ulysses” was a key song on the record that became Disraeli Gears, the highlight of Cream’s brief career.

It was an intense and not entirely peaceful burst of creative recording. Jack Bruce had written a number of songs with poet/musician Pete Brown that he was keen to record. But rampant egos demanded equality of input regardless of quality of material. Thus we have the iconic blues-rock of “Sunshine of your love” rubbing shoulders with Ginger’s “Blue condition”, a song that manages to plod tediously despite being in 6/4. Blind Willie Reynolds’ “Outside woman blues” is pure electric blues; well played, but devoid of musical invention. It also has a lyric of such controlling misogyny that it makes you wince. Yet is preceded by the affecting lament of Bruce’s “We’re going wrong”, a lyrically rich and musically textured ballad with echoes of desperation or even hopelessness. It is a fabulous vocal performance by the song’s writer.

Without doubt, “Tales of brave Ulysses” is one of the highpoints of the Summer of Love. But Disraeli Gears has a second classic piece of ’67 psychedelia in “SWLABR”*. Another Bruce/Brown composition, it captures the moment in fully flowered up imagery, but slyly reminds us that this ain’t no Garden of Eden.

So many fantastic colours, I feel in a wonderland.

Many fantastic colours, makes me feel so good.

You’ve got that pure feel,

Got that rainbow feel,

But the rainbow has a beard.

Ahmet Ertegun, president of Atlantic Records, provided Cream with the redoubtable studio team of producer Felix Pappalardi (later to form rock band Mountain) and engineer Tom Dowd. First song off the blocks was a standard blues workout “Lawdy Mama”. The producer massaged this – with the help of some new lyrics by his girlfriend Gail Collins – into album opener “Strange Brew”, a punchy up-tempo blues-rock number that satisfied Clapton’s desire to cut loose with an Albert King inspired solo while containing the song within radio’s three minute constraints.

Those constraints were starting to gall Clapton. He resented the 7” single’s limitations of time and format and hated the requirements of promotion. He told Melody Maker magazine “We are very anti- the whole commercial market. People are brainwashed into thinking that the number one record represents the best music available.” Clapton wanted to stretch out towards the blues horizon, and did so increasingly in live performance.

But the tensions between exploratory blues odysseys and Jack Bruce’s songwriting discipline were unsettling the waters.

“It was a very difficult time for me. I was bringing… the best material that I’d written with Pete, and was very, very keen to have it recorded. But when we played it to the powers that be, they didn’t like it.” [Heylin, p. 240]

Or, rather more directly:

“The others were full of shit and jealousy. It goes back to the composer-credit thing.” [ibid]

Shit there may well have been but there is little aural evidence of it clogging the record grooves, other than risible music hall closer “Mother’s Lament”. Though perhaps progress was impeded in some way, for Disraeli Gears was not released until November 1967, five months after the single “Strange Brew b/w Tales of Brave Ulysses”. In a year that scattered LP jewels with profligate abandon, that’s a long time.

When it did finally hit the racks, Disraeli Gears appeared with a striking cover painted by Martin Sharp, the same Aussie artist who had scribbled down his poem for Clapton in the London club. A friendship flourished and they moved into a studio dwelling in Chelsea’s Kings Road with their respective girlfriends.

Martin was a very gentle man, with an insatiable appetite for life and new experiences. At the same time he was very considerate and sensitive to others. An admirer of Max Ernst, who inspired a lot of his work, he was and still is a great painter. [Clapton, p. 92]**

Epitomising those heady sun-and-acid-drenched times, the Disraeli Gears cover has been much imitated but never surpassed. Gazing at it evokes an era that is easily romanticised; we will never know what it was really like to walk the King’s Road or Carnaby Street in the seasons of ‘67, but we do have some enduringly wonderful music on which to imprint our fantasy images. Disraeli Gears is a vibrant snapshot that well deserves its place in that album. 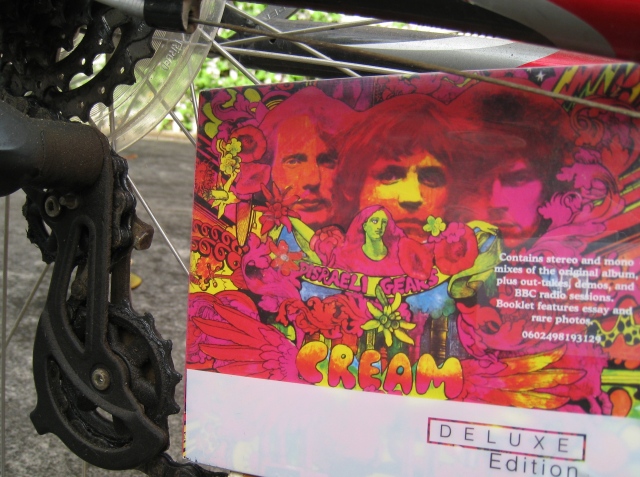 * “She Walks Like a Bearded Rainbow”, since you asked.

** Martin Sharp died on 1st December 2013. This appreciation of Disraeli Gears is dedicated to his memory.

Image: Ulysses and the Sirens (1909) by Herbert James Draper

Clinton Heylin “The Act You’ve Known For All These Years” [Cannongate, Edinburgh, 2007]

← WALKING TOWARDS SUNSET
HALF MAN HALF MACHINE →