THE SHOW THAT NEVER ENDS…

Easter 1972. The rambling gambolling bead-strung throng that was The Grateful Dead tribe arrived in Europe for a major tour. Musicians, technicians, kids and consorts; amps and desks, instruments and condiments, the Dead family was primed and ready for a leisurely trundle around the continent… and Britain too. Naturally the shows were recorded; obviously there would be a live album. And there surely was: Europe ’72. A six-side vinyl testament to the songcraft and musical muscle of one of America’s most significant rock-culture institutions. 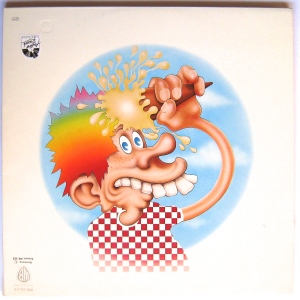 Containing a rich selection of songs from previous albums, Europe ’72 also has a generous scattering of new compositions. This is no ‘tour sampler’ but a document of a band literally and musically in motion. The new material is quality stuff: ‘He’s Gone’, ‘Jack Straw’ and ‘Ramble on Rose’ are numbers that hold their own even in the weighty Dead songbook. Some of the performances have become landmarks in the massive live Dead catalogue: fans cite this version of ‘China Cat Sunflower’ / ‘I know you Rider’ as one of the very best.

The jamming-space-rock-stoned-lysergic-freakout material expected of any live Grateful Dead opus is present in all its shambolic glory. ‘Truckin’’ and its ‘Epilogue’ sprawl across Side 5 while Side 6 has the pre-dawn mystery of ‘Prelude’ flowing into a gloriously misty ‘Morning Dew’.

On the cover we have the Kelley/Mouse drawing of a hapless goofy teenager managing to squelch ice-cream onto his rainbow forehead. [Incidentally, the spray of ice-cream spells out the word ‘live’. Well, it does if you have enough chemical help on board]. The back has a holy shoe of presumably the same person (the sock matches the lad’s shirt) striding over/under/through a rainbow anchored by dual pots of gold. Who knows what it all means, but it has a suitably upbeat hippy vibe. The inside of the triple gatefold is blank white, which is probably significant too.

There have been cries  of ‘foul’ over vocal overdubs added to enrich the harmonies on Europe ’72 but despite that post-hoc tweaking and polishing it remains an enduring favourite and a top-seller for this iconic performance-based band.

Europe ‘72  was the first live triple album by a single artist and appeared in November 1972. In addition to being a great live document, it would also be an excellent place to begin exploration of The Grateful Dead.

When Yessongs was released in May 1973 my acquaintance with Yes amounted to an intimate knowledge of Fragile and a passing acquaintance with the first, self-titled album (which I didn’t like too much because it wasn’t Fragile. Ah, the limited horizons of youth).

The first side opens slowly and enigmatically. Silence and distant crowd noise is replaced by a low-volume recording of ‘The Firebird Suite’ by Igor Stravinsky. Presumably this is ‘walk-on’ music as it segues into a synthesiser line and then Wham! we are scaling the exotic mountains of ‘Siberian Khatru’. It’s unhurried and sonically chilled. Hey, we’ve got six sides of music here. No need for agitation.

‘Heart of the Sunrise’ follows and is utterly energizing. The closing piece on Fragile, here it is promoted to the No.2 slot and lifts and soars accordingly. I was astounded at the life that leapt out of the piece in performance; this was a formative experience in my life-long enjoyment of live recordings. 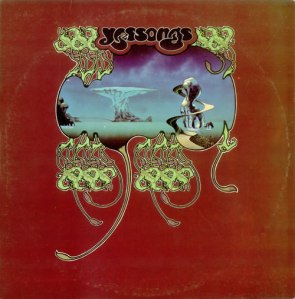 Indeed, that high-octane feels pervades Yessongs and is the reason why I love it so much. Far from sounding bland and play-by-numbers, older songs like ‘Perpetual Change’ and ‘Starship Trooper’ come, er, alive in a thrilling and involving way.

There are solos, but they mostly don’t outstay their welcome. Integrating ‘the Fish’ into ‘Long Distance Runaround’ gets a little tedious, but there is always the interplay between Chris Squire and Bill Bruford to enjoy. Even the Rick Wakeman ‘Six Wives’ section is fun despite a crass interpolation of a well-known melody from ‘The Hallelujah Chorus’. Considering that the album showcases two quite different drummers – Bill Bruford on three tracks, Alan White on the rest – it all hangs together remarkably well. Steve Howe is magnificent throughout and I love Jon Anderson’s singing despite having bugger all idea what any of the lyrics mean.

It is more than likely that Yessongs is also responsible for my long-term affair with cover art. Roger Dean’s paintings for the triple gatefold were intriguing, exotic and more than a little magical.

The first one, where mountains come out of the sky (and they stand there) is ‘Creation’. The second shows trees, grazing deer and a very odd eco-system. It’s all misty and verdant and seemed to say, ‘Nature’. The third panel is ‘Society’ or ‘the Future’. A woman sits and contemplates a hovering aeroplane of most futuristic design. It’s empty but peaceful.

But where in this does the back cover painting fit? The mountain islands are floating through space accompanied by a spaceship that might be a distant future relative of the plane in the previous picture. But is this pre-birth or death? Gee, it was fun to wonder about while listening to the unfolding complex beauty of ‘Close to the Edge’.

These days there is no need to wonder. Wikepedia tells us that the names of Roger Dean’s paintings are, in order,

Escape        [The back cover picture, clearly establishing it as a new beginning]

Ah, the cycle of life. Perhaps that’s why I still love Yessongs. It unfolds, surges, meanders, stumbles but searches ever onwards. There are peaks and troughs, beauty and dissonance. There is complexity heated by the warmth of creative friction. In the end, if I have to choose, I’ll be a Yes-head rather than a Deadhead.

Oklahoma born pianist Leon Russell had a highly successful career as a session musician well before he further established his name as a musical director par excellence with Joe Cocker on the 1970 Mad Dogs and Englishmen tour (and album). When the call came for Concert for Bangladesh, Russell was there and features prominently on the live triple subsequently issued under the moniker ‘George Harrison and Friends’.

His own albums were doing very well too, as were concert ticket sales.  The inevitable tour resulted in… you guessed it, a triple live album entitled Leon Live, released in July 1973.

The Shelter People – Shelter was his label – included a band, a Reverend and a small gospel choir. The concert (recorded at Long Beach Arena in August 1972) is more like a revival meeting than a rock gig with Leon Russell a pale-skinned long-haired Southern Baptist preacher talking and exhorting ‘bout the redemptive power of love and music.

The opening medley has it all. The gospel backing singers testify in a blurring and a merging of soul and song. Come and be baptised by the rock infused cadences of the Southern Baptist tradition. Hallelujah! If you have ever seen The Blues Brothers you’ll recall ‘The Old Landmark’ scene where Reverend James Brown infuses Jake and Elwood with the spirit. It’s like that. And if that’s your thing you will arrive, exhausted but elevated at the end of side six some two hours later. For me, it’s a great energy but I mostly enjoyed the live versions of Leon’s better known songs: ‘Delta Lady’, ‘Shoot Out on the Plantation’, ‘Roll Away the Stone’. The regular breaking into ‘preaching’ segments got pretty wearing and seemed to extend quite thin musical ideas indefinitely. Perhaps you had to be there. Having said that, when I played side six on its own, it was energised and thrilling, so I guess it’s about finding the right balance between spirit and mixer.

There was one more live triple album released in 1973 but we’ll save that for another occasion.

In the meantime, thanks for coming tonight and have a safe trip home. Merchandise is available in the foyer.

Part 1 of this feature on ‘Live Triple Albums’ was

Welcome Back My Friends…

Part 3 concludes the series (for now) with