Carlos Santana was rather busy in 1973. Early in the year he got together with British master-guitarist John McLaughlin to continue working on the exciting, spiritual music that appeared on the under-appreciated Love Devotion and Surrender. To celebrate the end of recording they went out to buy a snappy white suit which the cover shot suggests that they shared in a spirit of fraternal anti-materialism.

‘If I have the trousers, John, then you must have the jacket.’

‘No, Carlos. I cannot deprive you of this radiant garment woven of spiritual purity.’

‘I insist, brother. My recently acquired name, Devadip, is sufficient embellishment. Anyway, I don’t like the buttons.’

‘As you wish my friend. I will wear the jacket as a symbol of our surrender to love of music and devotion to our guru. I must, however, beg a favour.’

‘Name it, fleet-fingered brother of the cosmic fret-board.’

‘For the album cover, could we use a shot that only shows me from the waist up?’^

By the time of the release of Love Devotion and Surrender in July, Santana had put together a new band called, with commendable transparency, ‘The New Santana Band’. They went on the road in Japan, with material for a new album was being written along the way.

The band may have been ‘New’ but it was hot and by early July all was in readiness for recording of the first ever official live Santana album (excluding their appearance on the Woodstock soundtrack, of course). The resultant album was the massive three-LP set Lotus. There are not many more exciting and enjoyable live recordings in the rock catalogue and perhaps none housed in such a magnificent package.

One of the striking things about Lotus is the scarcity of vocals. Leon Thomas gets to play a lot of maracas but does not step up to the microphone too often. If you exclude those songs that have a one-line repeated chant for lyrics (such as ‘Se a Cabó’) or a single verse (‘Oye Como Va’ and ‘Toussaint L’Overture’), there is precisely one song amongst the 22 tracks. (The compulsory ‘Black Magic Woman’, in case you were wondering). As for musical feel, this is very much a red-hot jazz-rock outfit with lightning chops and a pervasive Latin swing. Sometimes ‘Gypsy Queen’, sometimes ‘Bitches Brew’.

Material is drawn from the four-album back-catalogue plus three pieces that would appear on the next studio album, the brilliant Welcome (released in November 1973). If Abraxas songs get a little more air time, well that’s not unreasonable: it was a #1 album in the USA and Australia and sold very well around the world. There are also a couple of otherwise unreleased pieces, including a Michael Shrieve drum solo that has some entertaining interplay with Tom Coster on electric piano. The sharp-eyed will note that ‘The New Santana Band’ wasn’t actually entirely new, as young Michael had been on board from the beginning. But we won’t quibble; he is a fabulous drummer.

Electric piano, organ and occasional synthesiser offer an extensive palette of tonal colours and sonic seasoning. The guitar solos are plentiful and inventive, with lots of nudge-nudge quotes from other pieces in the tradition of jazz improvisation. ‘Mantra’, for example, includes a reference to Michel Legrand’s ‘Theme from Summer of ‘42’ while the expansive arrangement of ‘Incident at Neshabur’ has nods to ‘My Favourite Things’ (Coltrane edition) and ‘What Game Shall We Play Today’ (Tom Coster tipping his lid to Chick Corea). My favourite, however, is ‘Never Can Say Goodbye’ (Jackson 5) in ‘Samba Pa Ti’.

Art Direction for the amazing package was by Tadanori YOKOO who dreamed up the concept and gathered a team of Japanese artists and photographers to realise his vision.

Lotus saw a limited release in May 1974. Astoundingly, it did not officially appear in the US until a 1991 CD release. Given how great a live recording this is, it’s a perplexing oversight. Both CD and a vinyl re-issue (2013) are currently available; though if you want the original vinyl, I suspect you’ll need to be a patient Vinyl Hunter-Gatherer.

Given the amount of music here, I’ve chosen not to write about individual tracks but for those who have not heard anything from this live Santana magnum opus, grab some headphones and settle in.

The announcer lays it out in his greeting…

“Welcome back, my friends, to the show that never ends ~

Being a fan of keyboard-driven progressive music there was never any doubt about acquiring EL&P’s record of the Brain Salad Surgery tour, released in August 1974. In one sense it is an overblown example of the live record plugging the previous studio album: every song from BSS is here. So it had better deliver something pretty special to justify the expense and shelf-space.

And broadly speaking, Welcome Back does deliver. Greg Lake is in fabulous voice throughout, Carl Palmer drums up an entire eco-system of percussive sounds and what Keith Emerson’s keyboard wizardry loses from being outside the studio it certainly reclaims in vigour and passion.

The show opens with the Wild West dance-party energy of Aaron Copeland’s ‘Hoedown’ from Trilogy. Then we have some British input as Lake takes a swing at the Parry/William Blake hymn ‘Jerusalem’ (Brain Salad Surgery). This is followed – as it is on the studio album – by an Emerson-arranged performance of ‘Toccata’, adapted from a piano concerto by Argentinian composer Alberto Ginastera. That’s side one. Copeland, Parry/Blake, Ginastrera. It is a potent reminder that ELP is built squarely on the keyboard virtuosity of Keith Emerson rather than any particular compositional flair.

Having said that, the live version of ‘Tarkus’ (the side-long title-piece from the second album) is terrific; forceful and dramatic and not a moment too long at 27 minutes. King Crimson fans will smile at the inclusion of a verse from ‘Epitaph’, which Lake sang on the first KC album. The ‘acoustic’ section works pretty well, with Emerson’s piano sounding clear and clean. On ‘Take a Pebble’ (first album) the band insert a number of other songs – ‘Still…You Turn Me On’, ‘Lucky Man’ – to give Greg his moment in the spotlight. Still, Keith gets plenty of solo piano time before they reconvene to wrap up ‘Pebble’.

‘Jeremy Bender’ didn’t amuse me on BSS and doesn’t fare any better here. Mulching it with ‘The Sherriff’ (Trilogy) amply demonstrates that neither song offers much.

The whole third LP is occupied by a live rendition of ‘Karn Evil 9’, the centre piece of Brain Salad Surgery. Although parts sound a lot less polished and layered than the studio original, there is a pugnacious energy here that makes the live version at least as enjoyable. While far from an essential album, Welcome Back is a great trip for fans of Emerson Lake and Palmer. Really,  things went downhill quite rapidly from here.

There are two other live triple albums from the FVE (First Vinyl Era).

Despite it being uniformly excellent and entertaining, we’re not covering The Last Waltz here because it contains a large number of ‘guest appearances’ and so doesn’t meet the obsessive Vinyl Connection criteria for this particular feature.

As for the Wings, that won’t take long: it’s very ordinary. Rubbish cover, the playing merely competent, too much Paul indulging himself, and a post-Beatles songbook that makes one yearn for the old days. Only die-hard McCartney fans will be able to love this one. 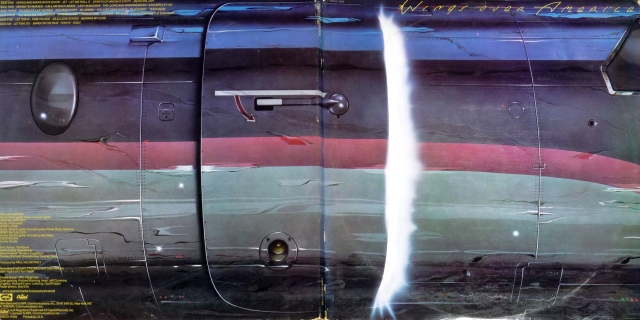 ^ Mischief aside, Love Devotion & Surrender was an album that divided both fans and critics. Something of an homage to John Coltrane, jazz aficionados found it earthbound while some rock fans found it too ‘out there’. Vinyl Connection reckons it’s more sinned against than sinning and worthy of regard for the terrific guitar interplay and the sincere attempt to capture something of the elevating potential of music. I was one of those who first heard ‘A Love Supreme’ on this album; music that opens the door to new realms has to be a good thing, doesn’t it?

This has been a longer article than normal. I seriously considered extending to another instalment, but really, how could a feature on live triple albums have quadruple parts?

PART 1: Welcome Back My Friends…

PART 2: The Show That Never Ends…