Amongst fans of electronic music, you can well imagine the flutter of excitement when it was announced that German pioneers Tangerine Dream were coming to Melbourne as part of the annual Music Week. Their first visit this century.

With the venerable Edgar Froese now in his 70s and a recent CD entitled Phaedra Farewell Tour 2014, it would be a brave punter who decided to skip this gig and wait for the next visit, irrespective of mutterings about a return.*

When the Tangerine Dream website hinted of a ‘different’ show in the offing, the flutter became a fibrillation and this particular fan took the ‘more news after 8th October’ seriously, visiting daily to get the scoop. Eventually it was revealed that the band’s other appearance would be at ACMI, the Australian Centre for the Moving Image, playing their music for the 1977 film Sorcerer live in front of a projection of the movie. Liking that moody menacing analogue soundtrack, I signed up for that too, convincing Ms Connection that this would be a worthwhile concert for us to couple with. (Read about it here)

So, in summary: aging go-out-to-a-gig-once-a-year music fan books for two concerts in the same week by the same artist. Though as I tramped through a chilly Spring evening towards Melbourne’s Town Hall last Sunday, I did wonder what the hell I thought I was doing.

When I saw the queue snaking round the corner and up the hill, my spirits sank even further and I briefly considered running home with my tail between my legs. But resolved stiffened. If Edgar can gig into his 70s surely someone owning some three dozen of his albums can man-up and find some enthusiasm. Rising from a bench where I’d been miserably surveying the massive queue awaiting the opening of the doors, I girded what’s left of my loins and shuffled off to find the end of the line, sourly scanning the happy people standing within sight of the entrance.

My spirits lifted when I spied a nice chap who I recognised as a serious prog fan from many Record Fairs. I sidled up to him with a cheery greeting and he graciously allowed me to attach myself to his micro-space in the snail-line. As we chatted, I found myself warming up to the night and by the time we entered and made a bee-line for the merchandise table I was suffused with the spirit of the event sufficiently to break out a bundle of cash for a couple of CD souvenirs.

Michael being a much younger fellow, he and his mate headed for the floor of the Hall. Not being attracted by the prospect of 3 ½ hours standing, I ascended to the balcony and found a good seat commensurate with my age and offering an excellent view of the stage. 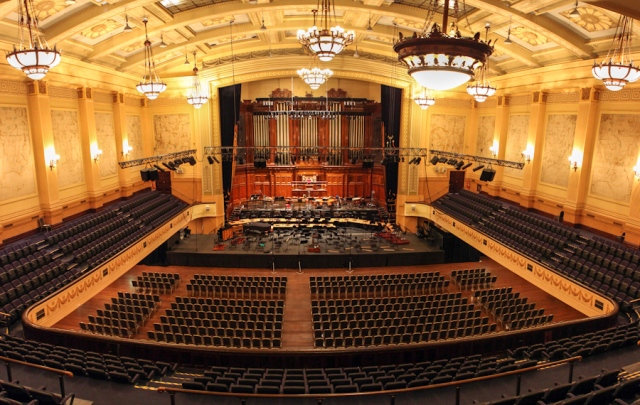 Part of the attraction of this gig was the inclusion of the Town Hall organ. Built in 1929 and refurbished early this century at a cost of $4.5m, this massive instrument has over 6,000 pipes and delivers over 2,500 cubic metres of air per minute (this info courtesy of the City of Melbourne site). Surely Edgar Froese could get some serious mileage out of this windy behemoth.

The second attraction was the presence in the band of Ulrich Schnauss. I have a couple of his albums and like them very much.

So after a brief set from support act Black Cab and an interval that seemed unnecessarily long given the rows of glowing, winking equipment already in place on stage, the house lights dimmed and a tall leather-hatted figure shuffled out to the organ alcove, high above the darkened stage.

Edgar Froese played the introductory piece of solo organ (not sure what it was, more on identification challenges later) then the other three players entered below and the concert was off and running. Well, more standing still really: four keyboard-based performers do not make for much jumping and throwing rock ’n’ roll shapes, ya dig? The woman who doubled on violin, cello and another unidentified string instrument provided the only significant movement throughout the two-plus hours, other than Thorsten Quaeschning adding electronic mallet-triggered drums to several pieces. 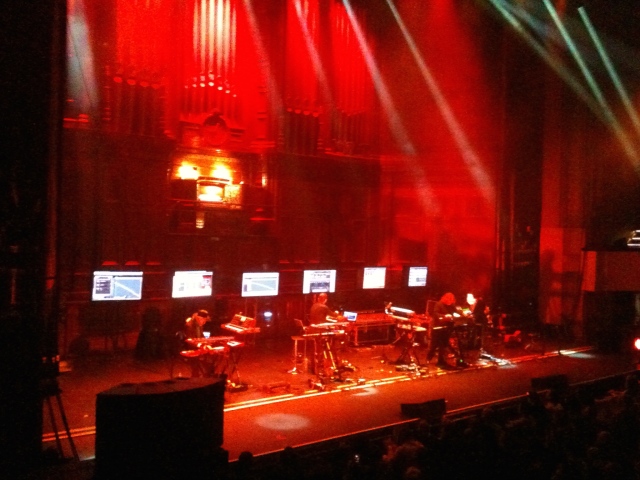 There was much variation of pace throughout the set. It seemed very purposeful that a slower, more introspective piece was followed by a rhythmic, rave-like up-tempo number. Yet, when almost everything is synthesised, there is an inevitable sameness. During one piece that reminded me of Zoolook-era Jean Michel Jarre, I found myself wishing for one of Jarre’s laser-light synths just to add some physical and visual animation. I certainly would have enjoyed greater use of the Hall’s mighty organ, which only appeared as preamble and encore like musical bookends.

One challenge in this concert was identifying the pieces. Now partly this is because the Tangerine Dream catalogue stretches back to 1969. It includes a massive 80 titles plus no fewer than 30 soundtracks. It’s a lot.

Thanks to Michael, our man in the mosh pit

The other reason relates to the re-working and in particular, the augmented electronic percussion in many ‘old favourites’. It seemed that the band extracted the hook or most melodic segment of some of the older, longer pieces and pumped this section up with steroid percussion. It worked in terms of energy, but made “Oh, that’s ‘Through Metamorphic Rocks’ from Force Majeure” moments thin on the ground.

Comparing notes with Michael, we identified pieces from Phaedra, Rubycon, Logos, Exit and Tangram. I’m sure I heard a piece from Underwater Sunlight and the single ‘Warsaw in the Sun’ but I wouldn’t bet my LPs on it. Still, it was an enjoyable concert made slightly bizarre at the end by Herr Froese’s incoherent and largely indecipherable conversation with the audience – the only words spoken throughout. Probably still struggling with the aftermath of a nasty facial injury not that long ago. As he was advised by his medical team not to tour, it is appropriate that our gratitude far outweighs any carping about Herr Froese’s articulation difficulties.

Michael tells me that, after the concert ended and we staggered out into the Melbourne night at around half-past eleven, the patiently persistent were rewarded by the band emerging to sign copies of albums, which is a nice touch.

Would I go to see Tangerine Dream again if they did confirm rumours and defy age to return next year? Not sure. But I’m looking forward to Thursday night’s concert in the ACMI cinema. The god-father of German electronic music will be a Sorcerer again, and we’ll be there. 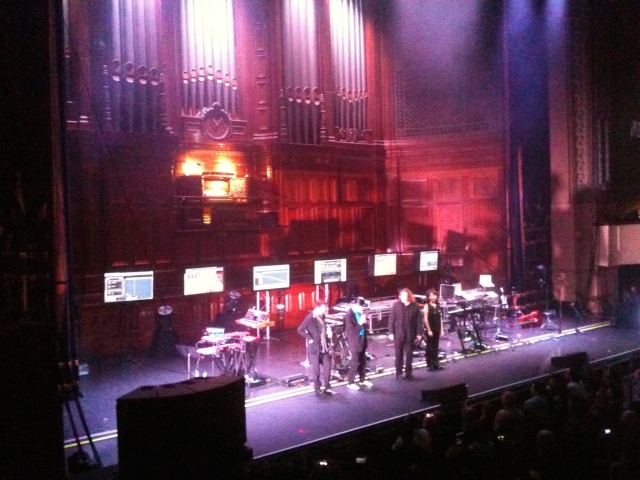 * This paragraph – indeed the whole article – takes on a sombre tone following the sad news of Edgar Froese’s death on January 20, 2015. He leaves a vast and rich musical legacy and those present at the Melbourne concerts can consider ourselves fortunate (if saddened) to have seen this last Tangerine Dream tour.