ON THE ROAD TO GENESIS

Vinyl Connection’s love of live albums is well known. They’ve been written about frequently (the series on triple live albums, for example) but not recently (Back Live goes way back). Not through waning interest nor fears of retribution from the unconverted but simply because there just so much music to enjoy and so little time.

For a while I’ve been wanting to write about a live album that was truly influential for me in that it turned around my feelings – converted me, if you will – to an artist I’d been lukewarm about: Genesis. In those days of ELP pomp and Yes grandeur, Genesis seemed rather too polite, too upper-middle class and too clever by half with those tricky time shifts, key changes and references to mythology. Now I’d be the first to admit that my attention was focussed elsewhere; at the time I was seriously digging Atomic Rooster so finesse and musical filigree was perhaps not my primary guiding principle. But it seemed to me that Genesis were playing for themselves. Five young blokes sitting around in a comfortable front parlour somewhere in the Home Counties creating and arranging, then adjourning to the studio where they assembled the pieces into intricate compositions of great invention but only moderate heat.

‘I wonder if a diminished 7th might work nicely there, Steve?’

‘Certainly Tony. Just after the modulation to F# minor, you mean?’

It seemed that their music was composed by focussing inwards (Gabriel’s lyrics too, for that matter) then shared between the players within group. Something like this: 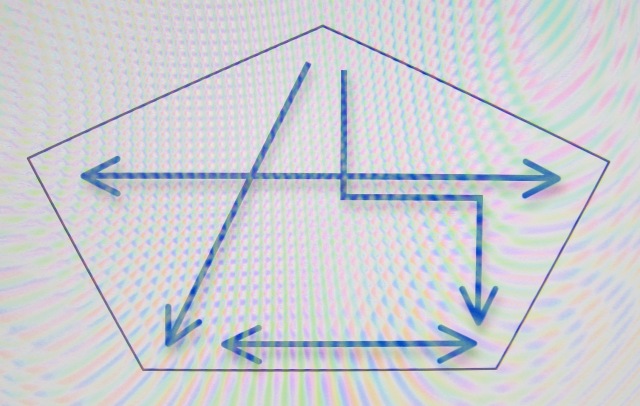 Pure fantasy, of course. But stay with me.

Following three albums of increasingly sophisticated progressive music, Genesis released a single album documenting their live shows touring the latest record. Captured on tape in Leicester and Manchester in February 1973, and bustled out five months later, it was the first official document of the band in concert and was, frankly, a Genesis revelation. Vital and punchy, the band burst out of the parlour and filled the room. A big room. 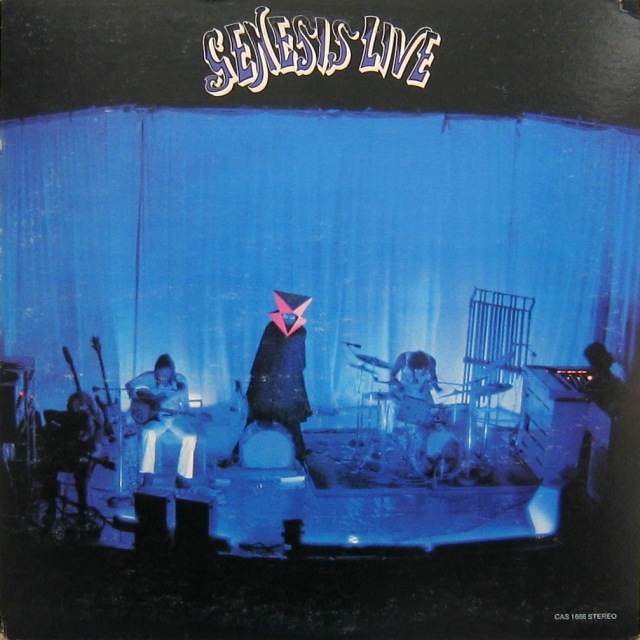 Peter Gabriel presenting his geometry paper on contiguous triangles. He received an A+.

To borrow (meaning ‘steal’) from that closet lover of live albums, the Right Honourable 1537, Genesis Live ‘captures a bunch of confident young bucks in full flow before an admiring crowd, (and) the results are startlingly different. The music pounds and flows.’ Just so, Joe. (That the band in question was Marillion is an irony all prog fans will appreciate.)

Live has five pieces, summarising the Genesis back catalogue succinctly. The opening two numbers are from the recent Foxtrot, the next two from its predecessor Nursery Cryme with “The Knife” from 1970’s Trespass providing a finale.

Why does it work so well? Part of the answer is certainly encapsulated in Joe’s neat description, probably because in the concert setting, the band needs to communicate not just with each other, but with the audience. They must focus energy outwards. Now given most of the musicians remained seated in performance, we’re not talking on-stage gyrations and star-jumps here. But Peter Gabriel’s charismatic (and enigmatic) presence, augmented by costumes and props, certainly provided a theatrical visual focus. The performance, the music, reaches out… and connects. 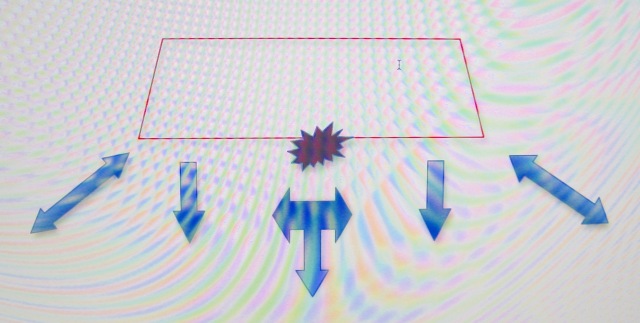 From the rich opening mellotron chord of “Watcher of the Skies” where the audience roars welcoming approval, the energy flow between players and listeners (then and now, concert hall or lounge room) is juiced with immediacy and that special ‘without a net’ feel that all great live albums have. Whereas the measured development in the studio version is brooding, here the tension builds palpably to herald Gabriel’s entrance. I’d have to admit that Pete actually sounds a little restrained at first, but the guitar/bass crunch carries the momentum grandly.

“Get ‘em out by Friday” rollicks along, swinging between the quieter, narrative sections and the prancing power of the instrumental parts. Tony Banks battery of keyboards hold it all together as Gabriel sings of unscrupulous property development and human misery in a variety of character voices.

Possibly my favourite song about an indestructible homicidal plant, “The Return of the Giant Hogweed” has British flavoured martial overtones and a lovely electric piano interlude (Tony Banks) followed by a tearing Hackett guitar solo. The song may be a little naff, but those solos are the biz and the climax is powerful and exciting. 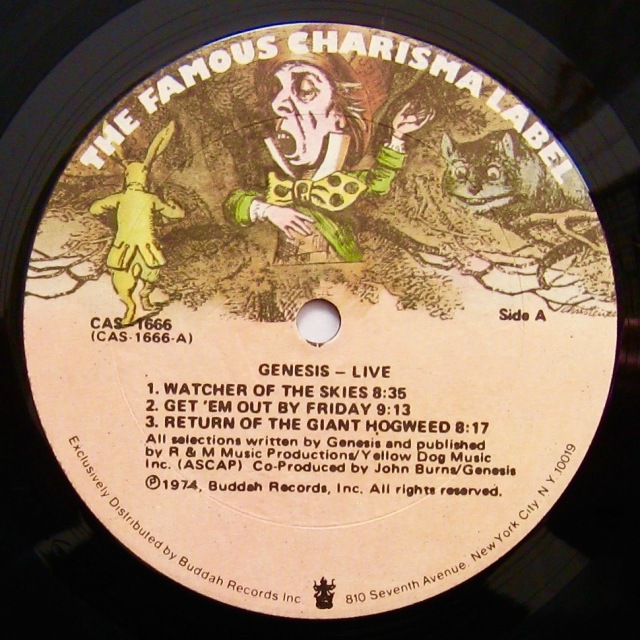 Genesis – Live was released somewhat later in the US

Side two really ratchets up the creepiness and malevolence. In the macabre tale of “The Musical Box”, things start gently, genteelly even. It is not so different from the studio version, except when the change-up happens at the four minute mark and Hackett cuts loose, underpinned by the robust sophistication of Collins drumming, you can feel the excitement building. “The clock, tick tock”. The climax is simply more convincing in this live version, an orchestral gallop to the finish line conducted by deranged Old King Cole, all flying limbs and mad eyes. Ta DAA!

Dating from the days when the Genesis guitar chair was occupied by Anthony Phillips, “The Knife” in the studio has much light and shade, with quiet passages featuring Gabriel’s flute, prominent pacing bass and a fine solo by Mr Phillips. In concert this tale of manipulative – probably terminal – leadership is still structured, but the discipline of the playing only just contains the beast.

“Some of you are going to die—

Martyrs of course to the freedom that I shall provide”

Everyone contributes to the electric current that runs through this piece. Hackett confidently yet respectfully claims the guitar parts, Phil Collins is a subtle powerhouse (Jeez, he was a good drummer), Gabriel struts and rants. The final martial section – I had not previously noticed how often those military rhythms invade Genesis songs – is forceful ensemble playing writ large. 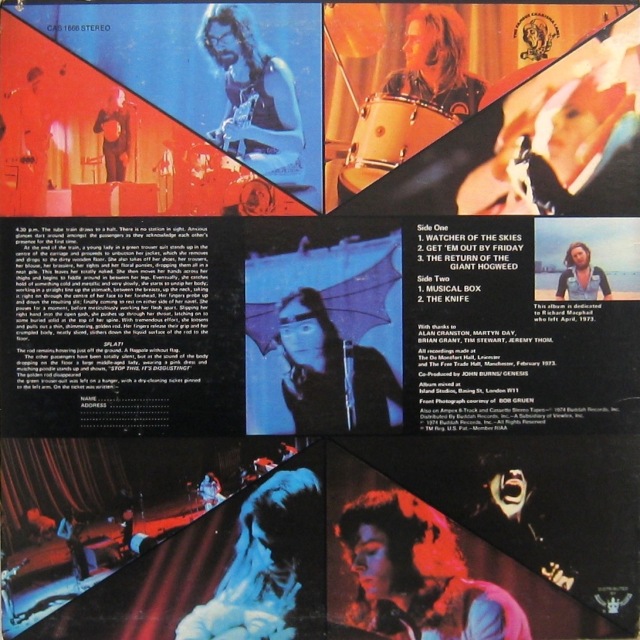 Having extolled the virtues of Genesis Live, a final word about something I noticed about during the writing of this piece. Switching between the studio and ‘in concert’ versions of these songs I did enjoy the live outings; very much. But I was also reminded of the strengths of the writing in the three studio albums. They are full of invention, detail, and variety and are all worth getting to know, even – or perhaps especially– for Marillion fans. 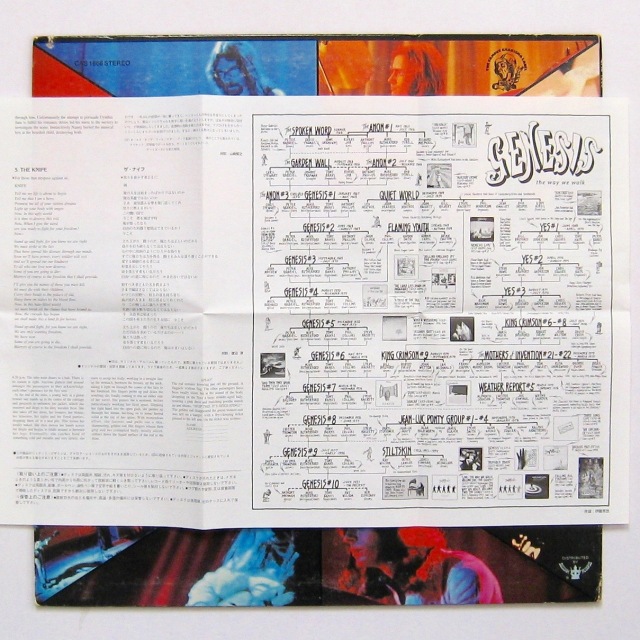 ← AGHARTA GLASSES
ART ON YOUR SLEEVE #2 →