ART ON YOUR SLEEVE #2 − OSIBISA

For the second instalment in the Art On Your Sleeve series I’m delighted to welcome JDB. Her blog Augenblick is well worth checking out.

JDB contributed the ‘art’ section of this piece, increasing the overall depth and quality of the post immeasurably. Hope you agree. 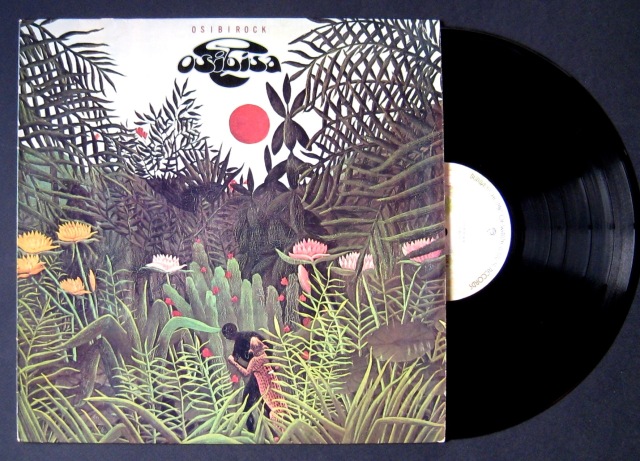 When Osibisa was formed in late-60s London by 3 musicians from Ghana and 3 from the Caribbean, their infectious blending of cross-cultural rhythms with rock was refreshing, engaging and new. The band was the first to bring African music textures to the Western High Street and they enjoyed some success. The striking Roger Dean album covers helped too.

But as urban ears started to open to roots music more generally, so critical opinion of Osibisa’s music waned. It seemed to try a little too hard, stay a bit too safe, compromise a little too much. Which is a shame, as Osibisa were not an African band. Nor a Caribbean one. Nor a British one. They were one of the first genuine fusions and, seen in that light, their 70s albums can be enjoyed a great deal.

Osibirock, their fifth studio album, is no exception: an entertaining and consistently enjoyable mash-up of rock, jazz, Ghanian highlife and West Indian colours. It’s unfortunate that the first track, the novelty (attempted) hit “Who’s got the paper” opens the album. It epitomises the above criticisms. After that, however, things improve, with “Why” having a pronounced gospel feel over soulful organ until the half-way point where the rhythm leaps in and the brass fires up. The chanting vocal over the organ is full of life, as is the tasty guitar solo.

The title track sounds surprisingly bluesy with the chorus doing ‘the jungle rock all night long’ and obviously having a damn good time too. “Kelele” opens with marimba-like percussion. Then you notice an audience in the background, being taught the song. Odd to have an audience sing-along intrude into a studio album; although the massed percussion is vibrant and the crowd well back in the mix., this feels like filler.

Side two opens with “African Jive”, very much an Afro-Caribbean Blood Sweat & Tears (and that is a compliment) with another tasty guitar solo from Paul Golly. Then come the two songs I enjoy most, “Komfo (High Priest)” – a pretty, jazz-blues piece in triple time – and “We Belong” a fine example of the jazzy Osibigroove.

“Kangaroo” bounces along brightly on a syncopated drum/bass pattern with the brass filling the spaces nicely while “Home Affairs” begins with a fanfare and rounds out the album with all the expected musical elements – percussion, bouncing bass, shiny brass and soulful organ – present and dancing. There’s even a flute solo and a splash of electric piano to round out the Afro-Caribbean gumbo in a satisfying way.

Osibirock isn’t the best Osibisa album, but it’s full of life and energy with a resounding cheerfulness that is good for the spirits. Just start with the second song.

An Osibisa fan could be forgiven for imagining that the painting on the cover of Osibirock was by an African or West Indian—perhaps a favourite artist of one of the band members?—who was drawing on memories of the flora and fauna of their home country. In fact, the work, Jungle with Setting Sun* (1910), is by the Frenchman Henri Rousseau (1844-1910).

Rousseau, entirely self-taught, didn’t start painting full-time until the age of forty-nine, after retiring from his post as a customs clerk. His primitive style, rich in colour and detail but lacking in shadow, nuance and perspective, initially drew scorn, but was ultimately celebrated by the modernists, including Picasso.

In the painting, which is in the collection of the Kunstmuseum in Basel, Switzerland, a disc-like sun glows above a dense array of vegetation: serving platter-sized blossoms of rosy pink, salmon, and golden yellow that tower over man and beast alike; what appears to be an organ pipe cactus dotted with smaller, red flowers; succulent ferns and spiky grasses in a multitude of shades of green, and trees with palm frond-like branches. In the midst of all of this lushness, a jaguar pounces on a featureless native.

Rousseau created over twenty-five jungle paintings and they’re his best-known works. The first one appeared in 1891 and the rest between 1904 and 1910; it’s these latter paintings that finally brought him a degree of critical recognition and acceptance.

Interestingly, the rich, evocative detail of these paintings isn’t drawn from any memories of previous travels: in his lifetime, Rousseau never left France. He drew inspiration for his exotic subject matter from the many excursions he made to the Natural History Museum and the Jardin des Plantes, a botanical garden and zoo in Paris, where he assiduously studied and sketched plants and wild animals. “When I am in these hothouses and see the strange plants from exotic lands, it seems to me that I am entering a dream,” he noted.

Writing in the catalogue that accompanied a 2005 exhibition of Rousseau’s ‘jungle paintings’, Frances Morris and Christopher Green noted that “even the most threatening of Rousseau’s jungle pictures, with their gory scenes of primal aggression, also represent lush, colourful, and alluring worlds, conveying the simultaneous terror and fascination Parisians felt toward far-off lands. These scenes say less about the jungle than about the anxieties of modern Paris.”

* How a painting is named seems to be quite a fluid process. In this case the album cover names the work as “Negro attacked by a jaguar” and acknowledges The Kunstmuseaum, Basle, Switzerland as providing the permission to reproduce the image. Yet the museum web site lists the title used above. It is also sometimes listed as “Forest landscape with setting sun”. Guess it all depends on your focus.

← ON THE ROAD TO GENESIS
10 ARTISTIC ALBUM COVER PORTRAITS →