ART ON YOUR SLEEVE

An occasional series featuring LPs boasting ‘fine art’ on their covers, with words about the music and something about the art

By 1974, the massive success of Procol Harum’s debut single was a long time gone. Not that the band had disappeared; more gently but inexorably declined. The primary song-writing team of Gary Brooker and lyricist Keith Reid (with notable contributions from Robin Trower along the way) had written the bulk of the band’s songs over seven annual albums of increasingly patchy quality. Their eighth album was something of a return to form, with Brooker-Reid writing all nine songs on Exotic Birds and Fruit. 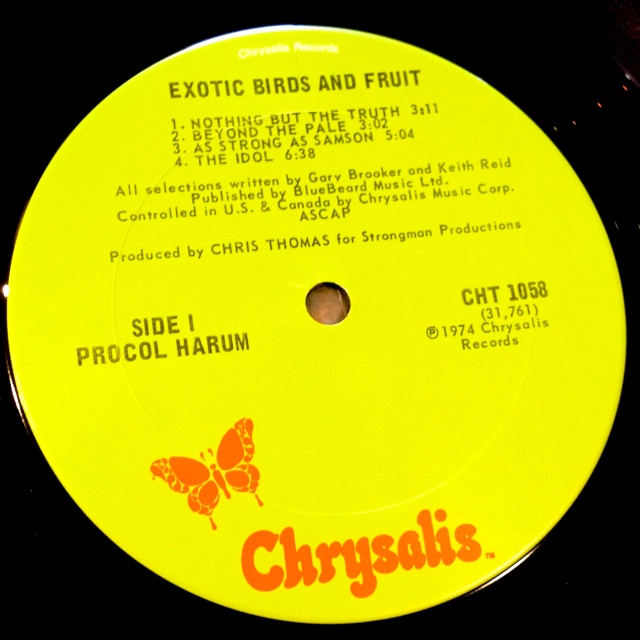 Side one is daubed with symphonic grandeur, opening energetically with “Nothing But The Truth”, followed by the rousing mythological adventure of “Beyond The Pale” and peaking with the sublime “As Strong As Samson”, a soaring melody delivering politically charged lyrics that still penetrate today. If you know nothing of Procol Harum apart from “A Whiter Shade of Pale”, listen to “As Strong as Samson”. A powerful tune, great organ work, goosebump chorus. Do it now. Meanwhile, “The Idol” closes the side effectively, despite extending the final chorus rather too long.

Although the opening song on Side Two, “The Thin End of the Wedge”, does not really mesh stylistically with the rest of the album, it has a sinister filmic feel which pleases. After that come a couple of undistinguished rockers (“Monsieur R. Monde”, “Butterfly Boys”) split by a jaunty if rather laboured Music Hall number (“Fresh Fruit”, about, er, fruit). The last song, “New Lamps for Old” is a slow ballad in the classic Procol Harum style and brings the album to an elegiac close.

Despite side one being a whole division superior to the second side, Exotic Birds and Fruit is a solid album imbued with the rich hues of Procol Harum exoticism. Let me hammer the point home one more time: side one is deliciously juicy.

The first difference that stands out between painting and sleeve is the colour. Why did the art director decide to wash out the vibrancy of the original into a sun-faded snapshot? I know they didn’t have much in the way of electric lighting in the 17th century, but really. Of course, this first salvo might well be manifestly unfair as I am compelled to reveal that the 2000 Repertoire CD re-issue redresses this imbalance by sporting a lovely reproduction of the artwork.

The second obvious point is, how come the painting is not a scene of decimated fruit scattered dead and dismembered in pools of fly-blown nectar? Every bit of produce in my back yard is peppered with peck-holes, gouged with beak-thrusts and strewn around like a corpse-choked battlefield. What is wrong with those birds? Has the artist drugged them? Are they, in fact, stuffed? Was Mrs Bogdani an accomplished taxidermist? That would explain the drunken lean of the cockatoo and the belligerent pose of the much smaller red parrot. Though it does not offer any clue as to why the cocky looks so damn happy. Fermenting fruit fumes, perhaps. And when did walnuts become fruit?

Alas, extensive internet research yielded no answers. Nor has my understanding or appreciation of still life painting expanded. Perhaps there are readers out there who can shine the light of fine art understanding upon my woeful ignorance. Please. 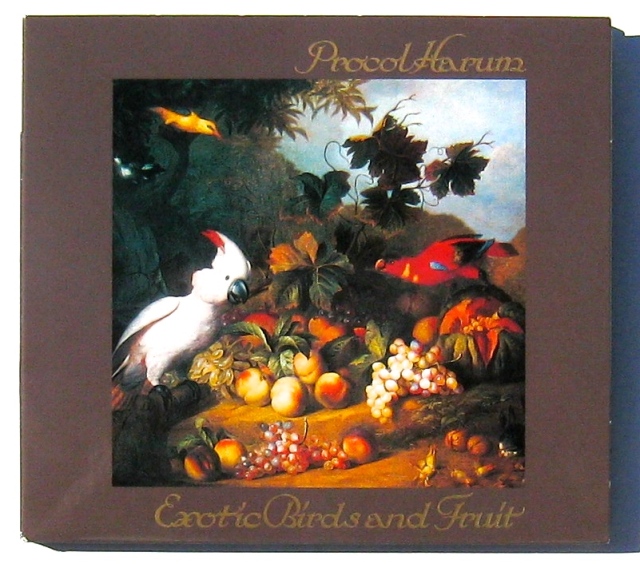 Jakob Bogdani [1670 – 1724] was born in Hungary but migrated to England when he was thirty years old, building a successful career based on his popularity with the court and associated aristocrats. This from the Procol Harum web site:

“One of Bogdani’s most important patrons was Admiral George Churchill, the Duke of Marlborough’s brother, whose famous Windsor aviary provided the inspiration for many of the exotic birds that abound in Bogdani’s work.” So not stuffed, then.