“Beam myself into the future”

Needing to choose a CD for an album-length child-accompanied drive across the Melbourne suburbs, I pulled out Kraftwerk’s Computer World. There wasn’t much risk as the boy really likes Man-Machine. When he saw what I’d pulled out, he gave it the thumbs up and even an endorsing, ‘Good choice Daddy’, so I knew we were in for a pleasant trip.

I also knew that I’d like something different for the return journey and recalled how, a year or more ago, he had enquired whether a particular CD was Kraftwerk. It wasn’t, it was Komputer, a UK electronic duo who were clearly raised on the albums of the German synthesiser/electronica pioneers. Surely a good double. And perhaps an interesting ‘Now and Then’ post.

Kraftwerk released albums at fairly regular intervals from the time of their debut in 1971. After an extraordinary sequence of albums in the mid-70s – Radio-aktivität, Trans-Europe Express and Man-Machine – they took a break to recharge their capacitors and for Ralf Hütter to recover from a nasty cycling accident. Could they could come up with something new? Could they make a record without a hyphen in the title?

By the eighties, the home computer was becoming a significant part of business life and starting to infiltrate domestic settings. The idea of organisations – particularly government agencies – collecting and collating data was no longer the stuff of science fiction, but of current ‘best practice’. Hütter, right on top of these developments, commented in 1981, “Now that it has been penetrated by micro-electronics our whole society is computerised, and each one of us is stored into some point of information by some company or organisation, all stored by numbers.” [Buckley, p.166*]

Tapping into the Zeitgeist with post-war industrial efficiency, Kraftwerk deployed their trademark repetitive rhythms and catchy micro-melodies in a way that was both simple and sophisticated, clinical and comical. Somehow they captured both the expansionist business-worship of the new decade while also anticipating that this would, in some form at least, endure. Note the hierarchy in this lyric from the opening song:

The chant of greed, of success and, in this context, of dehumanisation.

But lest we get too depressed by this bleak, catchy social commentary, ‘Pocket Calculator’ shrinks technology to a novelty battery-driven tabulator that even sings:

I’m the operator of my pocket calculator

I am adding and subtracting

By pressing down a special key, it plays a little melody

In his quirky sing-song recitation, Ralf does seem to be taking the piss out of technology, modern society’s love of gadgets, and not least, pop music. If you can access the German version (1991 compilation CD The Mix is probably the easiest source) and a robotic translator, you’ll find this lyric variant,

[I am the musician with a pocket calculator in my hand]

The pop muso of the early 80s, Kraftwerk assert, does not play but operate. 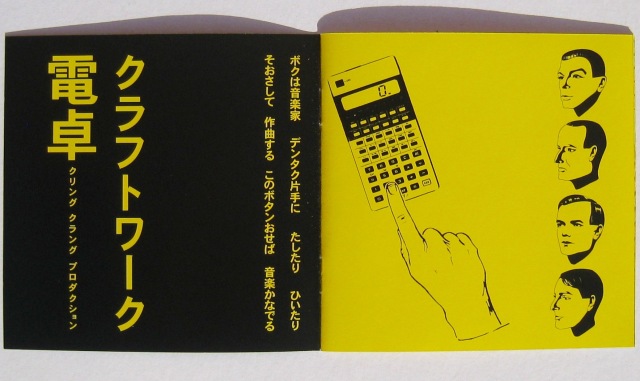 The international flavour of ‘Numbers’ takes a clear oppositional position to the dominant US/UK language axis of popular culture. Counting initially in German, voices also chant in Italian, Japanese, Russian, French and English – but all heavily treated so as to sound distinctly android. There is no music as such, simply distorted percussion underneath and a pattering electric tick on top. So when the ‘Computer World’ melody enters, it is very striking. The chattering breakdown ending is beautiful and sinister.

Not sinister, but rather sad, is the anticipation of on-line dating in ‘Computer Love’.

Stare at the TV screen

I don’t know what to do

I need a rendezvous

I call this number…

It’s very pretty. A simple melody that invites sing-a-long. Then you’re not alone, are you? You’re singing with the man on the record. How happy I am smiling as the crystalline synth notes cascade and I dream of a rendezvous that will dissipate – or at least distract from – the numbing urban loneliness.

No wonder I want to leave this time, to jump forward to a brave new world where everything sparkles with automated efficiency. Hello ‘Home computer’.

I program my home computer

Beam myself into the future

That’s it, lyric-wise. But the crisply marching electrons carry us along to the upwards waterfall shower of the instrumental break that zooms around a sky metropolis like Johnny Depp crashing The Jetsons.

Final track ‘It’s more fun to compute’ halves the previous song’s two lines, pruning excess verbiage so savagely that just the title remains. The repetitive sequences and smears of electronic melody somehow evoke the soul of the robot yet remain utterly human. That is the beauty and brilliance of Computer World. Not a computer in sight during its creation, just four German blokes and their keyboards spanning past, present and future. 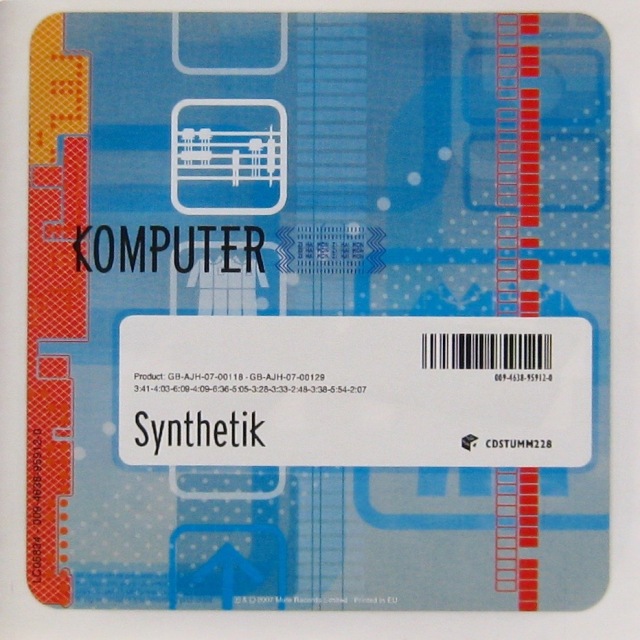 Having banged on so enthusiastically about Computer World, it’s a big ask to expect anything to match it. As Ralf and Florian might have sung, ‘it’s more fun to compete’. But we’ll avoid unseemly competition and observe that Synthetik, the 2007 album by North London duo Komputer, is a very fine follow-up indeed, and none-the-worse for copping Kraftwerk influences wholesale.

Nowhere is this more evident that the opening song ‘International Space Station’. It’s like a dare. Go on! Tell us it’s sounds like a missing track from Man-Machine channelling melodic snippets from ‘Europe Endless’. Well it does, and is very enjoyable, not least be cause where you expect Germanic intonation, you get dry North London cool.

The isolation from surroundings precipitated by personal devices is explored in ‘Headphones and Ringtones’, more in sorrow than anger. Sad, too, is the story of a lost cat in ‘Blackie’. The vocal delivery is very understated and has that distilled simplicity of the best Kraftwerk songs, though these stories have their own unique voice. I particularly enjoy the using of electronica to paint pictures of the natural world. ‘Like a Bird’ and ‘Rain’ do this charmingly. The latter always makes me smile, the chant of “Rainyrainyrainyrainyrainyrainy rain” over an insistent steam-driven techno beat would cheer anyone up on a day of inclement weather.

“Gloopy” sounds like what it says on the box, an experimental collage of synthesised noises, while to these ears “Tokyo (we want to go)” is a close cousin of Kraftwerk’s “Music Non-stop”; again, to enjoyable effect.

I love a good self-referential song, and album closer “What we do” delivers a wry, bleepy version of this with a chaotic mix of sounds and beats.

What we do is what we do

Fair enough, too. What Komputer do on Synthetik is retro-influenced electronica charged with creativity and wit.

Highly Recommended (if you rate Kraftwerk)