Over the past two-and-a-half years, Vinyl Connection has avoided writing about many of its long-term favourite albums. How to put the love into words? Can something fresh be discovered? Steely Dan’s sixth album is a case in point. It has long been a favourite —as seen in those troublesome ‘Best’ lists— yet I have baulked at the prospect of trying to share something of its enduring magic. Well, the baulking is over, friends. I offer you (Steve Gadd drumroll, please)… Aja.

Sue me if I play too long. 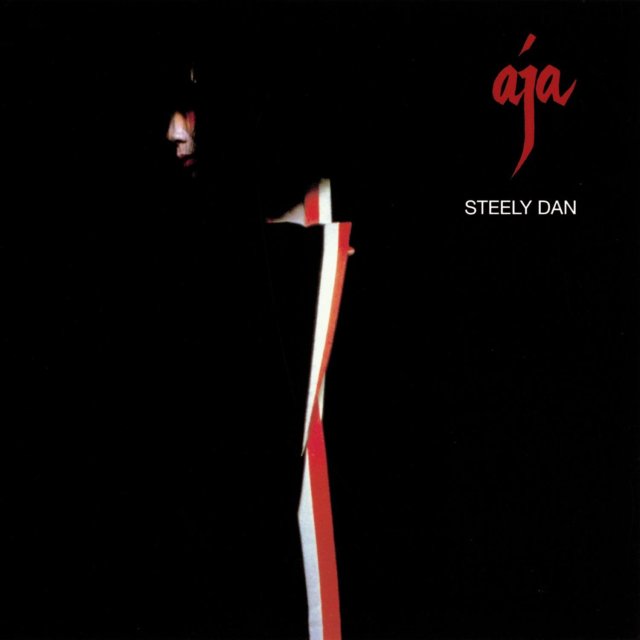 From its striking cover —timeless in its enigmatic simplicity— to the fadeout of the final song, this record resides comfortably in classic album territory despite sharing few similarities with other 1977 commercial monsters such as Fleetwood Mac Rumours or The Eagles Hotel California. Where Fleetwood Mac simply fizzed with positive energy when they thought about tomorrow (‘Don’t Stop’), one of Steely Dan’s protagonists dreamed of dying behind the wheel (‘Deacon blues’). While the Eagles’ Jesus people sought salvation at ‘The Last Resort’, the Dan’s pagan Josie ‘prays like a Roman with her eyes on fire’. Recorded primarily in sunny California, it set Raymond Carver-esque stories of wanderers and misfits in a heartless Gotham city that seems shadowy, no matter how bright the sun. But then, the fire in her eyes is most clearly seen at night.

The first song and already I’ve hit an impasse. Which copy of Aja should I listen to for this article? Perhaps the vinyl re-issue by Back on Black. It is a nice job and the record is new. Somehow the red vinyl Canadian pressing I picked up in suburban Melbourne years ago must also be included. The re-mastered CD was pretty good —better, anyway, than the muddy sound of the disappointing Citizen Steely Dan CD box set. Or that Original Masters copy purchased only last year —bloody expensive for ‘not great’ condition but outstanding clarity. Better audition them all with ‘Black Cow’, Aja’s opening song of alcoholic dissipation and relationship disintegration.

Five spins later, here is the assessment of each version in descending order.

The March 2000 edition of Mojo magazine boasted a cover photo of the Sex Pistols: ‘Nauseating, filthy, obscene’. Inside, as well as an entirely un-erotic full-page photo of Sid Vicious licking Nancy Spungen’s nipple, was a substantial feature on Steely Dan. It is easy to imagine that Messrs Fagen and Becker found the irony delicious. Much more tasty than Sid’s snack, anyway. But I digress. A side-bar article chose six of the band’s ‘most succulent cuts’ and Aja’s title track was among them.

Fagen: ‘We went for the whole eight minutes in one take. It was the only sensible way to do it. We played the musicians some kind of piano demo —piano and guitar and us stamping our foot— and we had long charts made up. Steve Gadd taped it up on his drum kit, we did a couple of takes and that was it.’ [MOJO, p.89]

If you say so, Donald. I love the cool, spare guitar solo of long-time collaborator Denny Dias and the 50s sci-fi synth under the closing drum solo.

An unlikely single (US #19), the song completing Aja’s first side is a tale of yearning not for love, but for some kind of artistic transcendence. The protagonist sees himself living out the dream of the doomed jazz musician. There is a sense of sincerity, of vulnerability, when he sings,

I cried when I wrote this song

Sue me if I play too long

This brother is free

I’ll be what I want to be

But wait on, throughout most of the song he is observing, ‘I gazed through the glass’, or looking towards a future, ‘I’ll learn to work the saxophone’, not living the present. Perhaps it’s all a delusion, ‘a world of my own’. This is the enigmatic story-telling of Steely Dan at its absolute best, enriched by the jazz chops of saxophonist Pete Christlieb.

‘We wanted a hard bop player who could just come in and burn through a bunch of unfamiliar changes without having to screw around,’ says Fagen. Christlieb navigated the song’s harmonically intricate landscape in a single take… and true to the songwriters’ plan, he brought an authenticity to the track. [Breithaupt, p. 51]

1001 Albums finds the song ‘as tender as it is bleakly humorous’ [p. 380]. While ‘Aja’ is the spiritual core of the album, ‘Deacon Blues’ is its bruised heart. 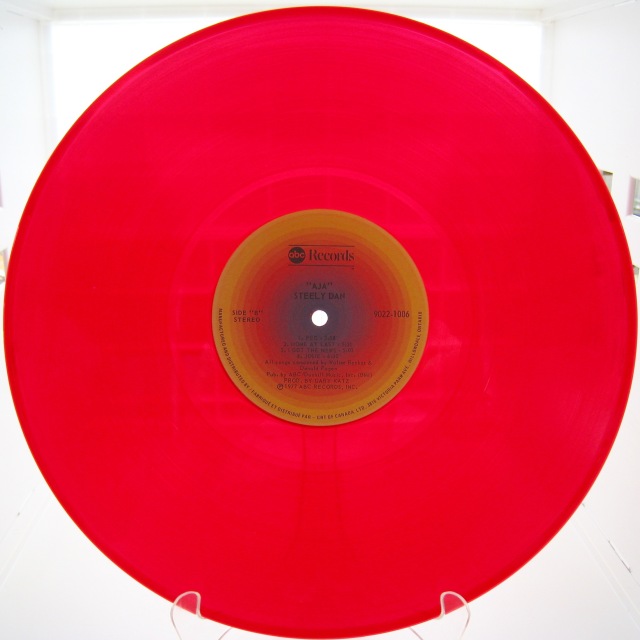 A ‘solid party tune’ according to 1001 Albums, ‘Peg’ is also ‘irresistibly funky’, largely due to Chuck Rainey’s bass joyously shagging Rick Marotta’s drums. They are one sexy coupling. Perhaps that was part of the problem when it came to the guitar solo.

Many of the hottest guitar players in Los Angeles tried to play the legendary guitar solo in ‘Peg’ to Becker and Fagen’s satisfaction. In all about eight different guitarists attempted it in what Becker and Fagen described as a ‘pantonal 12-bar blues with chorus’. Larry Carlton tried it, Robben Ford tried it, Walter Becker tried it himself twice, but in the end it was Jay Graydon who nailed what they were looking for. [Sweet, p. 146]

Not that employing different players concerned Donald and Walter. Over thirty were used during the Aja recording sessions, a continuation of the practice they had developed over past albums. You might think that this annoyed the session musicians, but not so.

‘Amongst players in LA, working on their stuff was a very big deal,’ confirms Lee Ritenour. ‘You’d see guys at other sessions, and they’d be asking, “Did your solo make it?”’ Chuck Rainey says his ‘presence on the recording of Aja has done more for my career than all the other projects put together.’ [Breithaupt, p. 55]

Frustration? Maybe. Dissatisfaction? Nup. Peg, it will come back to you.

Perhaps an update of Homer’s odyssey, or maybe an observation on wandering geographically while being immobilized emotionally, the wistful quality of ‘Home at last’ makes it my favourite moment on Aja. Even Michael Phalen, who provided acerbic liner notes to the original release, liked this one; ‘Beneath the attractive, effortless flow of words and music, one discovers a lyric presence and finesse of perception that is a rare thing on disc nowadays.’

Well the danger on the rocks is surely past

Still I remain tied to the mast

Could it be that I have found my home at last

Is that repeat of the final phrase an echo or a sigh? Or perhaps the fantasy of the eternal exile? Meticulous attention to detail in the lyrics contributes much to the timelessness of the songs; Cole Porter is both hero and model. Alliteration, assonance and metaphor are deployed extensively. By polishing the language but not nailing down meaning, Fagen and Becker leave inviting portals in their stories for the listener to move in and out of at will.

The liner notes to the original release became infamous due to writer Michael Phalen complaining about this song’s ‘pointlessly obscene lyric’. If you are curious (and who wouldn’t be), look up ‘Spanish kissing’ in the Urban Dictionary. Becker and Fagen remained sufficiently pissed off twenty years later to use much of their 1999 CD booklet essay to poke fun at the hapless journalist. Written originally for The Royal Scam sessions [Sweet, p.150], the song itself jumps and bounces with wicked energy. Doobie Brothers fans will enjoy Michael MacDonald’s contribution to the backing vocals.

The other danceable and sing-along-able song on Aja closes out the album. It seems like a fast-ish R&B groover but, as Breithaupt [p.48] observes, ‘why use three chords when eight will do?’ Interesting structures were never the goal of Steely Dan songs, they just emerged from the composers desire to create something different that would entertain them (and hopefully others too). Here is Breithaupt’s breakdown of the structure of ‘Josie’.

Knock yourself out following this chart as you listen. Or just bop along to a great minor key blues song energised by R&B groove and jazz stylings. Because the point is this: Becker and Fagen made rock albums filled with songs they found interesting to write and play. The criticisms of coldness, intellectualism, elitism or contrariness were (and are) empty carping. Lee Ritenour said, ‘They were the singer-songwriters who loved jazz’. Some may have a problem with that, but I do not.

Let’s give the last word on Aja to an unlikely fan: 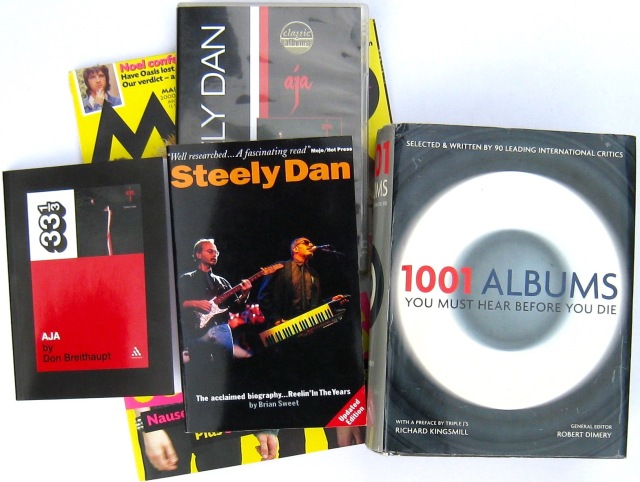