Having been doing the single parent thing for well over a day now, our appreciation of Ms Connection’s contribution to the good life at chez Vinyl Connection is shooting up the charts with a bullet. Amongst the chores, errands, boy-wrangling and general infrastructure maintenance there has, nevertheless, been space for spinning a few discs. Here are the highlights. 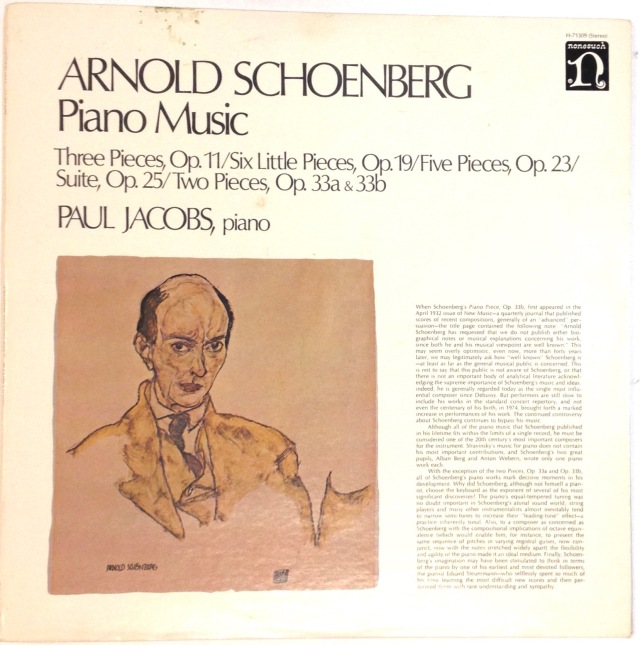 This morning’s first spin was a recent acquisition. That the complete piano music of Arnold Schoenberg fits on one album tells you that keyboards were not a major focus for the controversial Austrian. (Yes, another one). But, as the cover notes tell us, he turned to the piano at key stages in his development as a composer, making this small canon very interesting listening. Now I won’t pretend that I can adequately decipher —let alone explain— all that is going on here, but within reason, I enjoy being stretched and challenged. What I find is this. By listening to an ever-expanding diversity of music, my aural horizon extends and new territory opens up to explore. That’s particularly true of composed music of the twentieth century, an area I’m actively seeking out at present. These piano pieces have great variety of tone and mood though all explore —to a greater or lesser extent— serialism. I’d like to spend time with this record (but probably won’t). 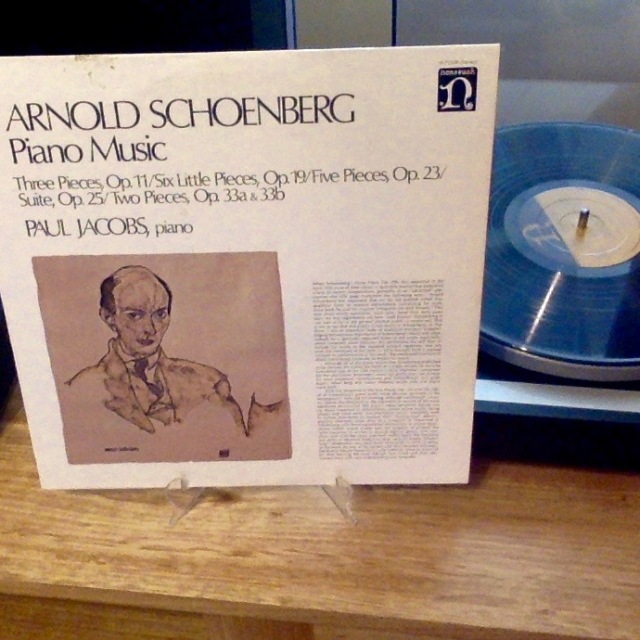 Dutch band Focus were a group I enjoyed a lot early in my progressive rock explorations. So when I saw a US copy of their 1972 double album, named with admirable language-busting simplicity, I thought it would be nice to have it join its Aussie cousin on the shelves. Especially as the Sire version has this lovely colour-shifting holograph thing that cannot be properly seen in the rubbish photo.

Sadly, I have to report that although I enjoyed 3, there was less invention and exploration here than I recall. Perhaps that is the peril of extending the boundaries over decades — you end up a long way from where you started. Still, an album that has both ‘Sylvia’ and ‘House of the King’ isn’t one to disparage. Though I really do wonder about two copies, even with different covers. 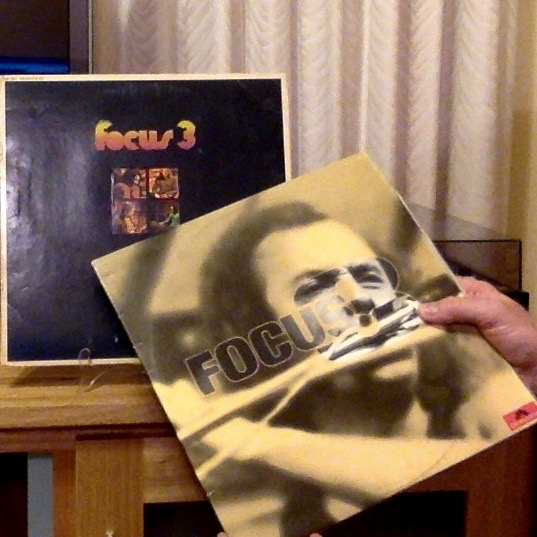 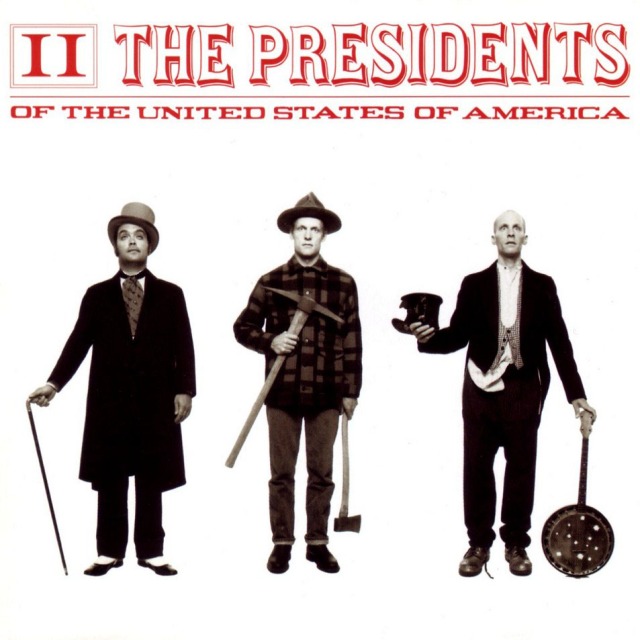 The Presidents of the United States of America – II (Columbia 1996)

There are albums you regularly see in bargain bins, flicking past them countless times until one day, on a whim (or in a Scrooge kind of mood), you take pity on the disc and buy it. Such was the Op Shop purchase of the second number-titled album of this post (hey, maybe that is a theme worth revisiting!) by absurdly named American power-pop-punks The Presidents of the United States of America. It’s full of moderately hooky guitar based songs that zoom past the windscreen without ever out-staying their welcome. Rocky, a bit funny (I mean, look at the cover), I liked half the songs quite a lot. Stand out was ‘Mach 5’, which is also fun on the bonus live disc. Recorded in Melbourne too! ‘Twig’ on the live CD is good too (Canberra, in case you were wondering). Overall, a bit like Weezer, but not quite as focused. I’d probably pay a couple of dollars for their debut on the basis of this 1996 sophomore effort.

Got the vinyl at a recent record fair (and posted it in the Vinyl Hunter-Gatherer report) and very happy I was too. It is a wonderful, loose but soaring jazz album that bastes Larry Young’s organ with lashings of percussion and has a terrific contribution from an uncredited Pharaoh Sanders on sax. Contrariwise, you could say that the squawks and yelps of Larry’s organ season the saxophone and percussion meanderings. This is exploratory but not alienating, tribal but with its own identity, distorted —sometimes tortured— yet earthy too. The binding effect of the organ and bed of percussion mean that it sometimes sounds like Amon Düül I and sometimes like Hawkwind goofing off in a tent with a couple of serious guests. If you like the jazz-funk trip-outs of Miles in the 70s, this album is highly recommended. You may be stretched, but in a good way. 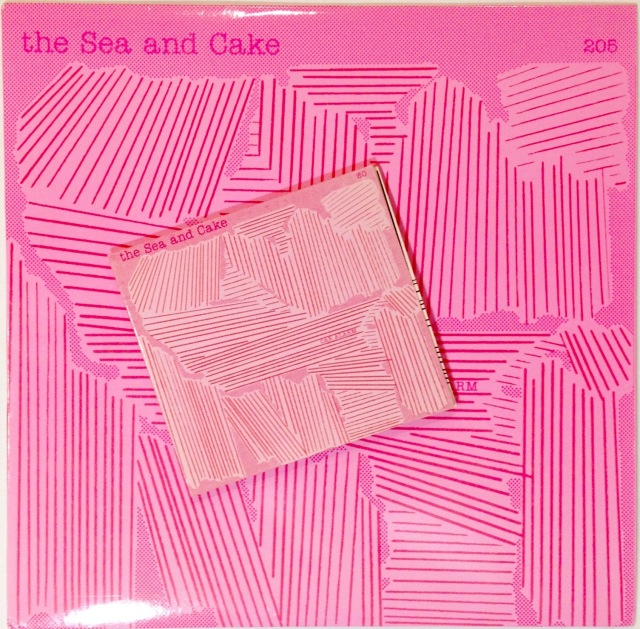 When Ms Connection and I saw Tortoise live in Melbourne a few years back I also saw a number of people I recognised from around the record collector circuit. One was a dude who works in the town’s largest second-hand music shop and with whom I got chatting about the excellence of the concert next time I was browsing there. Hearing my lament that I had acquired the entire Tortoise catalogue (not all on vinyl, alas) he recommended The Sea and Cake, the drummer for whom is none other than John McEntire from the band of the afore-mentioned slow-moving herbivorous dome-shelled land dwelling but sea-friendly reptile. (Ah, the lengths we’ll go to to avoid repetition. Shit. Two times to. Damn).

Back to The Sea and Cake. I have several, and this one, 2008’s Car Alarm, was both on turntable and in CD player today. I guess you’d call them post-rock in that this is clearly a band, but not with the usual tropes and modes. There is pervasive and very subtle use of electronics, great drumming from McEntire and a guitar sound that has more of the subtlety of jazz than the bombast of rock. Now, to enjoy The Sea and Cake you have to be able to embrace the whispery, breathy voice of main man Sam Prekop. As with Eric Matthews, it imparts a somewhat effete feel to the songs and how you respond to the band will depend entirely on how you react to Sam’s singing. In the right mood, I like the cool detachment and echoey intimacy. And, hey! the CD version has a bonus Australia and New Zealand track too!

Anything tickle your earbuds here? Or something you already know and like? Do tell.