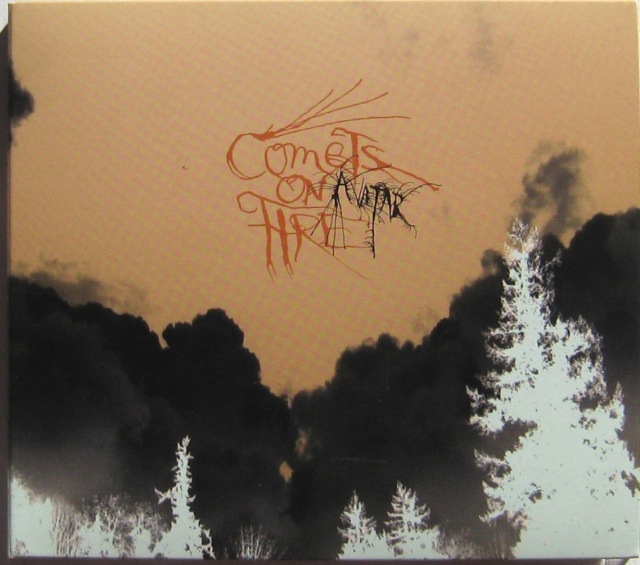 Though I tend not to loiter at the heavier end of the music spectrum here in Vinyl Connection land, there is a goodly chunk of noisy stuff in the collection. Avatar by US West Coast band Comets On Fire is an album I’ve had for a while and really like, despite an aversion to over-wrought vocals. Fortunately the voice is mixed well into the surging wash of sound so that visions of big-hair and spandex are (mostly) kept at bay.

The entry of the opening song sounds like a sudden edit into a thundering jam that has already been rolling for at least ten minutes. The groove has a strong Guru Guru feel: pounding drums, distorted guitars. The vocals are pure West Coast metal, however, as Ethan Millar bawls the words over a righteous psychedelic squall. The song is ‘Dogwash rust’, whatever the hell that means. Listening to the vocals doesn’t help, while the lyrics —helpfully reproduced in minuscule handwriting scrawl— are just as unintelligible. Doesn’t matter much though. We’re not here for poetic subtly but for all-out sensory overload delivered by twin distorted guitars, some drone-like keyboard underpinnings, and earthquake drums. Apparently no less an authority than Julian Cope described Comets drummer Utrillo Kushner as playing like ‘two drummers thinking they are Keith Moon’. It’s an eight minute assault that really sets up Avatar. [Listen here]

‘Jaybird’ starts more reflectively with an infectious bass figure that sounds familiar; like something from mid-70s Deep Purple, say. The guitar figures are lighter and nicely placed in the mix, vocals are (at least) double-tracked. Some nice synth noise adds cosmic intensity. Oh man, where is that damned riff lifted from?

Third song, ‘Lucifer’s memory’ is basically an electric ballad, a slow rolling song that opens with piano chords and builds throughout its seven minutes to a climax drenched with woozy psychedelic guitar lines.

Later, there’s even a slab of funky keyboard boogie in the instrumental ‘Sour smoke’ —whose borrowings also hover just outside the Zone Of Identification— before things finish in suitably grand fashion with ‘Hatched upon the age’. This six minute closer is powerful and elegiac: electric piano/picked guitar ballad intro followed immediately by vocals that evoke ‘Theme for an imaginary Western’*. Again, the guitars build slowly to a surprisingly abrupt end.

How to give an impression of Comets On Fire’s Avatar that is indicative but not derivative? What about this: a cosmic collision between MC5 and Hawkwind. Or perhaps this: the acid-fried love-child of Blue Cheer and White Hills?

Whatever. If you like massive effects-laden guitars, monstrous rhythms, waves of recycled 70s motifs rejuvenated with energy and flair, moments of melody washed by electro-technics (like pyrotechnics, but more electrical), this is an album worth checking out; it really does deserve that hackneyed back-cover command: ‘Play loud’.

* In fact, Ethan Miller’s vocals remind me of Dave Lawson of Greenslade, who covered the Jack Bruce / Pete Brown song ‘Theme for an imaginary Western’ (also recorded by Colosseum and Mountain) on 1974’s Spyglass Guest. 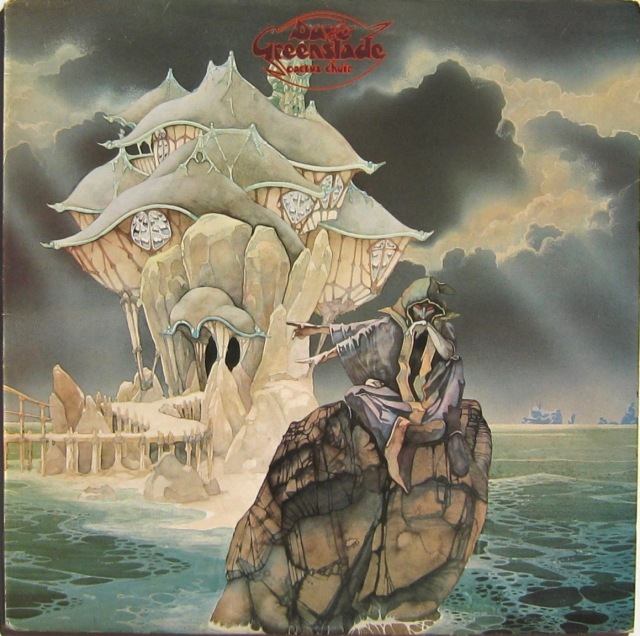 Greenslade being one of my favourite keyboard-based bands, the above footnote had me scurrying to the catalogue to see if there was anything Greenslade-related that fitted the Decade Diving format. And voila! Enter Dave Greenslade with his solo album Cactus Choir. Given the Roger Dean cover, and the presence of Tony Reeves on bass for the entire album, the connection with the recently defunct band is strong.

Opener ‘Pedro’s party’ has, as suggested by the title, a Spanish feel. Co-written with Jon Hiseman (Dave’s former colleague in Colosseum), ‘Gettysburg’ is a pleasant but unremarkable number sung by Steve Gould. After the voice of Dave Lawson (which could be kindly described as ‘unique’), this sounds fairly pedestrian. With third piece ‘Swings and roundabouts’ we’re back in the safe instrumental territory that is Dave G’s strength. Organ, synths, electric piano, all layered and interlocking in a bouncy rhythmic piece with a fractured final coda whose tolling bell leads into ‘Time takes my time’, a slow song delivered by Dave himself. Not sure he should sing, really. Have to say I’m missing Dave Lawson about now. His strangled whine made even the most pedestrian lyrics sound odd and a little disquieting. Mid-tempo instrumental ‘Forever and ever’ closes out side one with a pretty melody and deft use of analogue synthesisers.

Side two is, other than a brief vocal on the opening title track, entirely instrumental. This is largely a good thing, as most who sought out this album would do so based on Dave’s keyboard prowess. There is plenty of this on display, all beautifully played and tastefully arranged. There’s even an uptempo electric boogie (‘Country dance’) and for analogue keyboard nuts the lashings of ARP, Hohner electric piano, moog and clavinet are well worth the price of admission. Really, my only criticism, bearing in mind that I savaged a later Dave Greenslade opus (here), is the politeness that pervades the album. Final piece ‘Finale’ even has an actual orchestra, arranged by Simon Jeffes*, which reinforces the cultured cultural underpinnings of the work. Perhaps that’s why I missed Lawson and (the band) Greenslade; they were not quite as ‘nice’.

* Simon Jeffes was, of course, the English composer who founded the Penguin Cafe Orchestra.

Now I wonder if they did anything in ’76…

The first album by the Penguin Cafe Orchestra was released in November 1976. The group began as a quartet, formed by composer Simon Jeffes (1949 – 1997). ‘Classically’ trained, Jeffes was interested in exploring forms outside traditional composed music and indeed, rock and popular music. Although later Penguin Cafe Orchestra albums are elegantly structured and most accessible, the debut album was an altogether more exploratory affair. As Music from the Penguin Cafe has appeared at Vinyl Connection before, I won’t bang on about how much I like it (even though I like it a lot).

I was interested to read that Simon Jeffes’ son Arthur has formed a group called Penguin Cafe who play PCO music despite having no original members and who have an album planned for 2016. Why not? It’s fine music and deserves to be heard.