RETURN OF THE SILVER THING

By the time I found the resources—both personal and financial—for a first trip out of Australia, it was so long after most of my peers had ‘done Europe’ that my plans caused barely a wrinkle in the social fabric. Yet the very idea ruffled my feathers, furrowed my brow, and tended to turn my insides to something resembling a banana in a blender.

About the only thing that made the idea bearable was my contact in London. Having someone to meet me, give me a cup of tea, a roof and otherwise help me unfurl my travelling wings was very welcome indeed. The friend was Jo, who you may recall from Four Moments in Poole.

How naive was I as a traveller? Well, on my first day in Paris—which was also my first day ever in a non-english speaking country—I purchased an orange from a street seller, holding out my stash of French francs for him to take the appropriate amount. Is that gormless enough for you? I think—though I really have no idea—the piece of fruit cost twenty dollars, which at the time would probably have bought me 10kg of the buggers at home. But I’m jumping ahead. Back to Blighty. 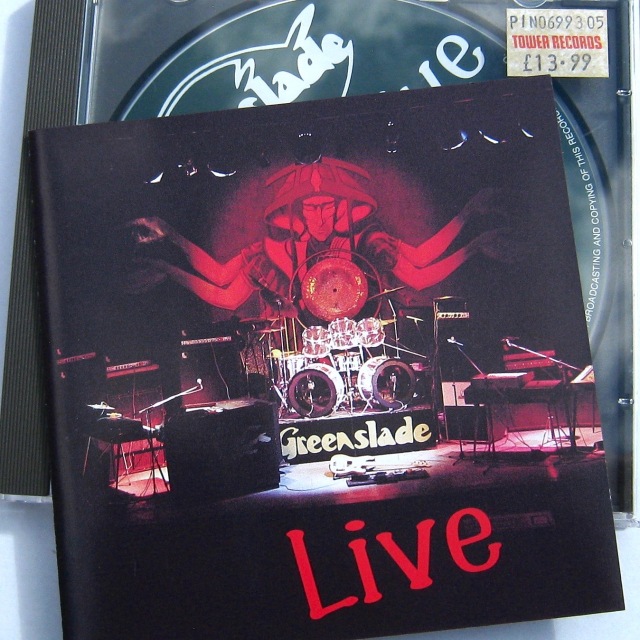 After an initial week tentatively poking around the West End and visiting a few notable sights (Tower Records on Leicester Square, Reckless in Soho) I was feeling a smidgen more confident, having reached Rank 4 on the newly developed Fear of London Transport rating scale (FOLT©). Not familiar with the FOLT? Let me explain.

Being on a tighter-than-tight budget I avoided taxis, but worked out the ticket system for the tube and buses pretty quickly. Seems simple and, after all those British TV programs, totally familiar, but it’s not. The underground is reached by descending into a skeletal understructure of Victorian engineering; it’s hot, it’s crowded, and the trains unbelievably noisy. As a train thunders towards the station, sounding like a massive metal millipede bent on devouring everything in its path, it’s hard not to involuntarily step backwards as you wait on the platform, eyes fixed on the circle of darkness from which the monster will emerge. The noise increases in volume and a belch of hot stale air puffs out of the tunnel just before the intestinal robot-worm bursts forth, screeching and grinding to a halt. It was all I could do to embark.

But I did better on the Underground than on the double-decker bus. Naturally, first trip, I made a beeline for the spiral staircase to spin myself up to the top deck. What 10-year-old wouldn’t? (Yes, I was three times that, but I’d been hearing and reading about these things for decades). Rushed down to the front, plonked myself in the first row and prepared to be transported by this first iconic UK adventure. But friends, I must report—with a zephyr of embarrassment colouring my cheeks decades later—I found the front seat unbearably scary. The height, the traffic, the way the bus jerked to a halt 0.25 millimetres of the vehicle in front… Retreat!

Half a dozen rows back, I could just tolerate the rocking jolting trip and sat there, panting slightly, and thanking my stars there was no-one I knew present to witness this craven display.

So Rank 6 for my first bus trip: six rows from the front.

(The Fear Of London Transport scale works for the Underground too; a FOLT© rating of five being a handful of steps back from the painted line signifying the safe boundary at the front of the platform, while a score of 0 means standing right on that line. Amazing how brave some Londoners are.) 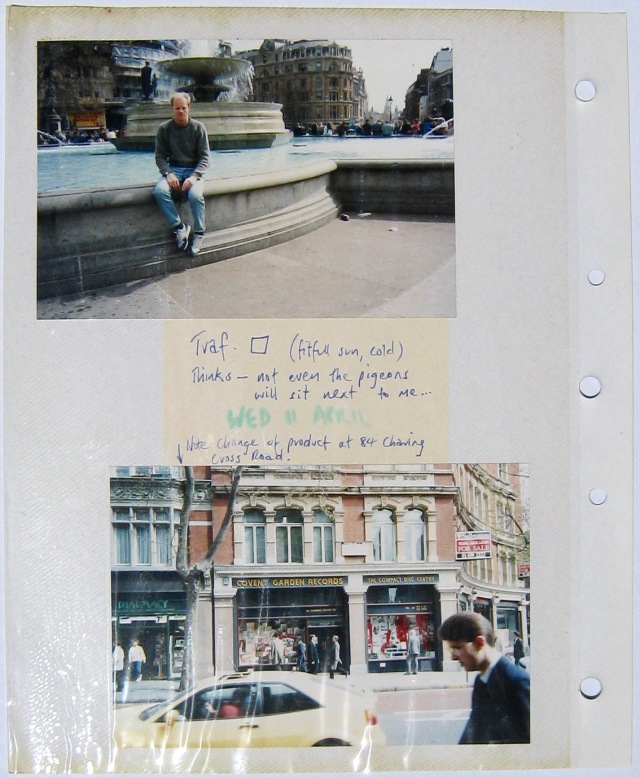 This page comes from an earlier epoch when photos were ‘hard copy’ and went into ‘albums’… and when writers had hair.

Having visited the famed Berwick Street several times—there were at least five music stores there in the early 90s, including the one immortalised on the Oasis album cover—and spent ages browsing the enormous racks at Tower and Virgin, I’d acquired more than a few CDs… but not the one I most hoped to bring back to Australia.

In these post-format days of regular and diverse re-issues, it is difficult to recall the era when we Compact Disc adherents awaited the first digital release of favourite albums with breathless anticipation. For me, top of my wish-list was Bo Hansson’s Lord of the Rings. I’d seen an ad in a UK music magazine suggesting that LOTR was available via a Dutch company, Universe Productions. Surely it would be a doddle to acquire it in Europe’s greatest city? Not so, apparently.

Meanwhile, I actually had done a few other activities in addition to seeking out record shops. Visits to the British Museum and National Gallery had ignited a powerful desire to see firsthand some of the art that built Western culture. Once again Jo proved her preciousness as a friend and advisor. Having heard about the potholes in my road to adventure, she recommended, without a hint of condescension or mockery, that I consider a package tour. ‘It will help you find your sea legs,’ she opined. Misgivings were many, yet so daunted by the prospect of venturing out of my language zone was I, it seemed a logical and practical solution.

Thus, with some trepidation, I found myself on a bus with three dozen affluent first world tourists—all considerably younger than your correspondent—heading for France.

There are probably several stories from that tour that I could regale you with—being almost struck by lightning on Mount Pilatus, falling in love with Andy Warhol in Venice, all the standard touristy things—but I’ll cut to the chase.

Despite using every single minute of un-herded time to locate every available music shop in five countries, as the end of my European vacation approached I had caught not a glimpse of the Bo Hansson CD. I’d looked in Lucerne, rummaged in Rome, scoured Salzburg; all without result.

The final afternoon in Amsterdam was shuffling wearily towards sunset as I trudged, footsore and still seedy from the previous night’s folly, back towards the rendezvous point for embarkation on an over-night ferry to Britain. More from habit than expectation, I glanced down a narrow side-street filled with chichi boutiques and curb-side cafés and spotted a tiny music shop. Sighing (because there is no choice in these matters), I veered right and entered ‘Boudisque’. The name matched the street, but not encouragingly.

Flicking in a desultory fashion through the CDs, I noticed time was running short. I’d almost missed the bus in Vienna and was in no fit shape for a repeat of that particular two kilometre sprint, so I prepared to exit the shop, and indeed Europe. But hope is a funny bugger, it lurks under hashish hangovers and dallies in dulled browsing-fingers.

And there is was. Bo Hansson — Lord of the Rings, Extended Re-mixed Version. ‘Extended’ might be good, ‘Remixed’ is dubious, but did I hesitate? As long as a starving hobbit at a feast-table. My precious, my precious, you are mine. Not to mention eleven bonus tracks from The Magician’s Hat and Attic Thoughts. There was a decided spring in my step as I strode back to base, clutching the little plastic bag like a football trophy won with a goal in penalty time.

The trip back by ferry was cold, uncomfortable and boring; I did not care. My half-hearted last ditch play for the New York lass who’d worked as a Playboy waitress was firmly rebuffed; I smiled with insouciant acceptance. Even the final, interminable bus trip from Harwich to London was endured stoically. In fact it wasn’t until the happy Con Tiki band faded into the twilight and I noticed I was alone in early-evening London with nowhere to stay that I came back down to earth with a thump. But having secured a treasure seemed to give me confidence. Shouldering my pack I strode off into the evening in search of a bed for the night.

The road goes ever on and on

Down from the door where it began

Now far ahead the road has gone,

Pursuing it with weary feet,

Until it joins some larger way,

Where many paths and errands meet.

And whither then? I cannot say. 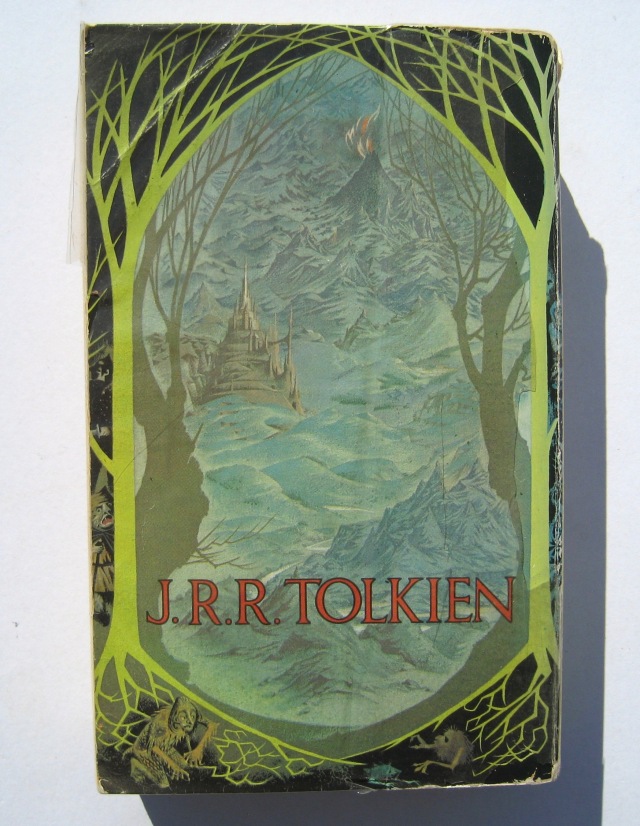 This was the final part of

LORD OF THE RINGS — A BOOK AND MUSIC STORY

Except (of course) for the Appendices

APPENDIX A: ANNALS OF RINGS AND SWEDES

PART I – THE FELLOWSHIP OF BOOKSELLERS

← THE TWO LIBRARIES
OF RINGS AND SWEDES →