A MUCH NEEDED VOID

First up, apologies to those of you who have been awaiting this review for longer than you should have awaited it. The fault was mine entirely in that I was confused because I thought I had three different albums to listen to again but it seems that I sort of didn’t. More one-and-a-bit. Let me tell you the story of a band half way between fire and ice, and an album that’s none more black.

When Polymer Records first sent the slightly dog-eared black vinyl copy of This Is Spinal Tap I was excited because I’d never received an album by a band with an umlaut in their name before. The excitement was short-lived, however, when I discovered that not one of my computer’s one hundred and fifty-five fonts has an ‘n’ with an umlaut over it. I drafted a review anyway, jogging the offending vowel mark to the left but the Editor rejected this, saying it looked like I’d dotted the ‘i’ twice. So the piece was shelved for a while, in the hope that the internet would be invented and such things would become commonplace. That’s umlauts on consonants, not Spinal Tap albums of course.

After taking the record to the local second-hand shop and being told it was worth almost a dollar, I decided to listen to the album anyway. The gatefold sleeve was unusual, with this sticker on the front that wasn’t really a sticker. It just looked like one. How clever is that!?

Six years later, Polymer/Polydor sent me another copy to review, this time on the Compact Disc medium. That was pretty confusing, because the CD case —they’re called jewel cases, but aren’t worth much either as containers or as an investment—, the jewel plastic box HAD A STICKER on the front. Here’s the puzzling part: it did not say ‘This Is Spinal Tap’ like the LP but just ‘Spinal Tap’. Did that mean that the band was not Spinal Tap any more and someone else was pretending to be Spinal Tap? I’d spilt coffee on the press release, so there was no way of knowing.

Everything else was the same, however, including the umlaut, except for the back cover. Below is a photo of both the record and the compact disc back covers. Which do you prefer? I like the disc-one because I enjoy reading stuff while I’m listening. As a result, I can say ‘The Compact Disc’s superior performance is the result of laser-optical scanning’ in German and Italian and a third language of unknown country of origin.

Another difference between the formats (that’s a phrase you’ll need to get used to if you want to keep up with technological advancements) is the information inside the gatefold sleeve is much, much smaller on the Compact Disc. So I’m really glad I didn’t sell the LP back then, as I can now read the informative excerpt from Rocklopedia Brittanicus (page 743, if you want to look it up yourself. Should have been page 666, Ha Ha) helpfully included to informatise the band’s history. But it wasn’t very helpful because of all the many names involved. Too many to even think about, really.

All you need to know is that the main men are David St Hubbins and Nigel Tufnel and they wrote the songs with the bass player, sometimes with help from another guy called Rob Reiner*. Oh, the small version (on the CD, which stands for Compact Disc) the song list doesn’t include the albums the songs came from, which is disappointing if you want to track down the whole Tap catalogue, or Tapalogue**. Neither does either gatefold include pictures of ALL the albums, which is a shame for the same reason. I really want to see what the cover of Bent For The Rent looks like. Or the live album, Jap Habit, recorded, I believe, in Japan.

Crickey, I’ve discovered another difference between the C-Disc and the Record. That’s because I just found an extra sheet inside the album cover where the actual record goes. It’s got all the song words on it, which is really funny. I mean, it’s funny finding the sheet after all these years. The actual lyrics aren’t funny at all. And it’s not funny at all that the technological uptakers of the new medium didn’t get the words although they didn’t miss much, especially as some of them are quite rude.

Wasn’t the dawn of the new millennium something? Lots of new albums were released in The Year 2000 probably because they wanted to be there at the beginning of something. I received lots of new music, so much so that quite a few are still sitting in a pile. The pile is so high, I stand my telephone (or should I say, ‘landline’!) on it which is very convenient. But yesterday, when I bumped the CD tower after falling asleep waiting for my internet provider to help me get back into the web, as I was clearing up, I stumbled upon—actually, I stepped upon—a compact disc that I thought was just a mock-up, kind of ‘advance copy’ of something. You know, the white label pressings of records? This was—or so I thought—a black cover test pressing of some band trying to get in on the ground floor of the millennium. But it wasn’t! It was another copy of This Is Spinal Tap. 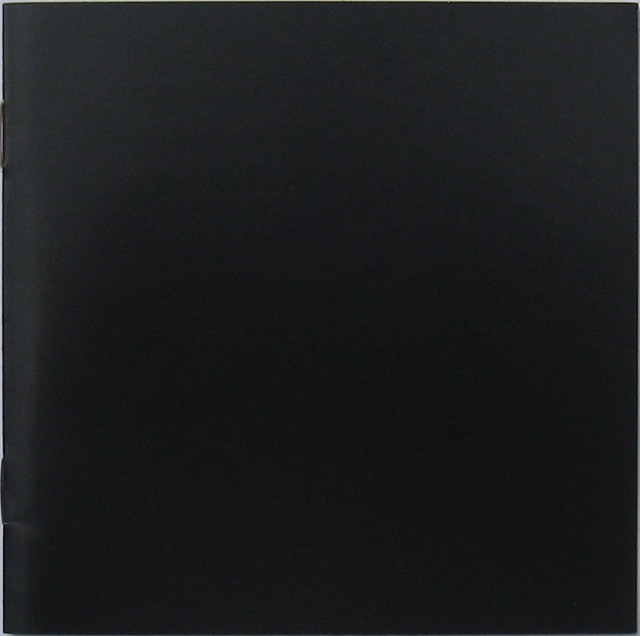 This one didn’t have either a sticker, or a ‘not-a-sticker’ on the front cover. It didn’t have anything at all. In fact, if I hadn’t smashed the jewel case (not worth very much. Ha) and had to replace it, I would never have seen the photo of the band and recognised Derek Smalls’s leopard-skin tights and moustache.

So what is different about this new improved re-release of an old album? Well, in addition to the photograph UNDER the CD, which you wouldn’t find unless you either took the disc out of the case or dropped it or stepped on it, or both, there is the same picture on the back cover. That back cover just keeps on changing, doesn’t it? Crazy. Also, the record company is now Polymer/Polydor/Studio Canal, Universal Records, A Division of UMG Recordings Inc. 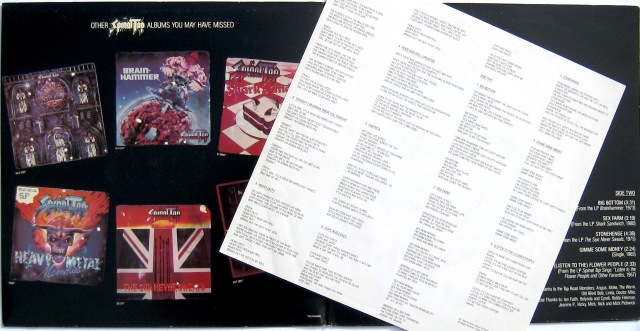 Thankfully, the song words are now included in the CD booklet, though they haven’t improved much. Also, there is a bonus track. It says ‘Bonus Tracks’ but really, there’s just one in two versions. It’s called ‘Christmas with the Devil (Scratch mix)’ and is a worthy edition to the Spinal cannon (Ha ha).

That’s all I have space for in this week’s column.

A varied hotchpotch of tired ideas, poorly executed in a rich range of repetitive styles. That’s the review. This band is rich but deserve to be poor. They should take a rest or be executed.

*** Loss of  one-eighth mark for not being vinyl

Ed.: Love the stuff about the cover art, but what about the music?

VC: It’s awful. It made my eardrums bleed.