WINNER TAKES IT ALL

Tomorrow I’m playing a third match in the Watsonia Tennis Club Championships. Lots of members enter multiple events; Open Singles and Doubles, A Grade Men’s, Parent and Child Doubles, Mixed. Given my level of fitness, I decided to enter just one event, especially as the boy was decidedly cool on the idea of playing competition tennis with his old man. Now ‘old’ here has an interesting context. One event in the fixture is the Veteran Singles, for players over 45. Well, I met the requirement easily enough. Met it some years ago in fact. So I asked my coach about entering the Vets.

‘Er,’ he offered tactfully, ‘There are a couple of good players in that event.’

‘So where are the good players not?’ I enquired with savaged grammar and sinking heart.

‘The A Grade Men’s,’ came the prompt answer, at which point I realised that ‘A’ stood not so much for First Class as for ‘Average’.

Somewhat to my surprise, I breezed through the first match. To my coach’s surprise, I managed to get through the second too. Which brings us to tomorrow, the grandly misleading Quarter Finals, where I will be playing a thirteen year old junior. When I mentioned this to the club Matriarch this morning, she offered the following assessment. ‘He’s good, young Jimmy. You’ll probably get beaten. Pretty easily.’ Although I was tempted to wonder out loud how often she has seen me play (precisely zero times), I opted instead to smile and reply that as I had already exceeded my own expectations, and those of my coach as well, I was happy enough to get my ageing ass whipped by a pre-pubescent Year 7 stripling. I didn’t phrase it quite like that, but that was the general message.

How does this relate to one of the most successful pop groups of the 70s, I hear you ask? Well, it’s about Gold FM Afternoons.

This particular playlist arose from Ms Connection’s mild admonishment, a few years back, that sometimes it might be nice to hear something she actually recognised, now and then. Something, perish the thought, that she could sing along to. Something (through clenched teeth), poppy. Hence, Gold FM Afternoons. If I remember to actually consult Ms C (not as routine as it should be, I blush to report), we might hear Queen or 10CC or, if neither of us are up for radio-fodder hits, even some UK jazz-funk such as Incognito.

Today, I took the initiative and pulled from the ‘Unlistened-to’ box an Op Shop (= Charity Shop = Thrift Shop) purchase from a few months back I’d been desperately avoiding spinning. Why in hell did I buy it, you mutter? Because it is a UK pressing of a Swedish band who began their ascent to the pop stratosphere right here in Aus. Yep, that ubiquitous Scandinavian acronym assembled from the names Agnetha, Benny, Björn, & Anni-Frid. 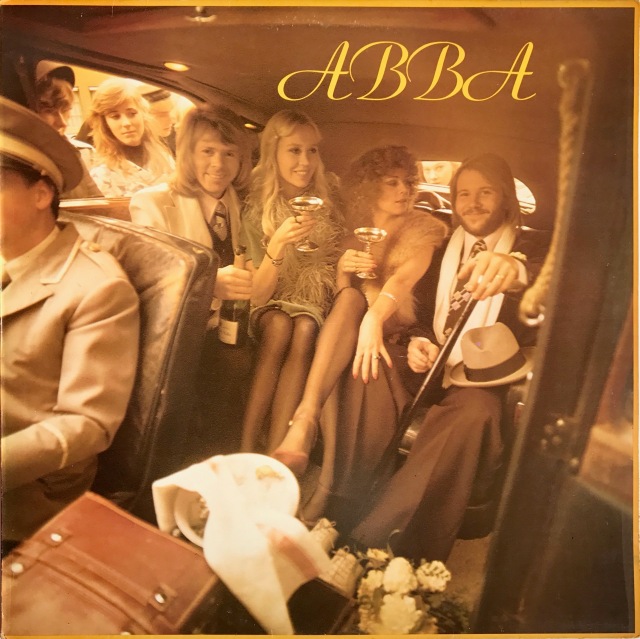 ABBA. The self-titled album that was Number 1 everywhere in the universe in 1975. I know this because I sold quite a few of the records, even by the modest standards of Max Rose Electronics, the suburban store where I worked part-time. I also know this because you simply could not avoid singles from the album if you turned on the radio.

The album cover shows the band all poshed up and swigging champagne, and has a gold border, suggesting this album was solely responsible for the dire creation that is Gold FM. Is that why I played it today? Probably not.

As well as being a failing student of Optometry and uptight casual salesman at the afore-mentioned record and electrical goods store, I also played tennis. In fact, I was captain of a Bentleigh Recreation Tennis Club Mixed Doubles team that played a couple of seasons in Level 18-D (or whatever nomenclature defined our meagre skills). It is my firm and enduring belief that I was appointed Leader not for my superior tennis skills nor (even less likely) for any maturity of personhood, but because I had both driver’s licence and car. This meant that I could ferry my three younger team-mates to and from the various suburban venues where we would be inevitably slaughtered on the dusty red en-tout-cas courts.

My vehicle, an ancient Holden in the terminal phases of emphysema, was without the luxury of one of those new-fangled squirty washer things that wets the windscreen so the wipers have a fifty-fifty chance of scraping mud off the glass (or at least distributing it more evenly over the surface), but it did have a retro-fitted AM radio through whose tiny speaker would be extruded the hits of the day. On the drives to suburban tennis clubs that summer of ’75, the song most frequently played was ABBA’s ‘Mama Mia’. The girls, both in the latter stages of their high school education and blithely contemptuous of the old fogey four years their senior who was the designated tennis taxi, would instantly burst into song whenever ‘Mama Mia’ came on. Which was a lot. Like very ten minutes. In fact one of the girls, cheeky and imbued with one thousand percent more confidence than I aspire to even now, would suggest—just after the final chorus cross-faded to a prattling DJ—that we change the station. Whereupon the bloody song would come on again. And again. 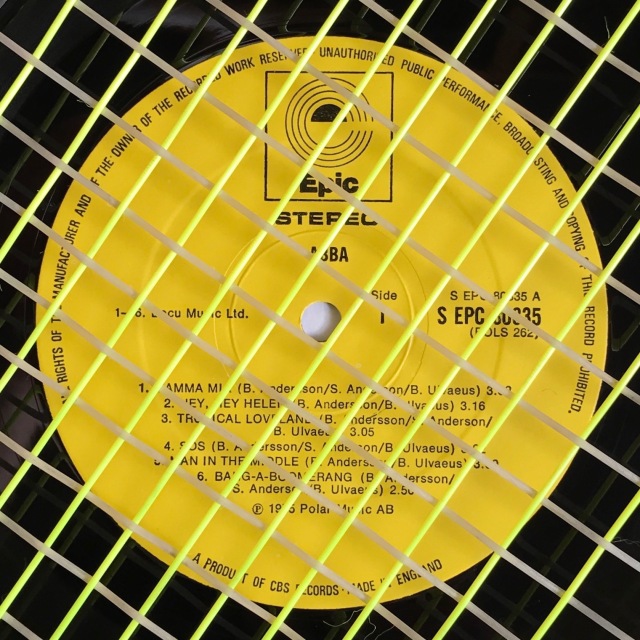 Tennis and ABBA being irrevocably linked in my sad subconscious, it’s obvious why the vinyl came out today.

And what was it like? Well, Ms Connection sang along to opener ‘Mama Mia’ fully as enthusiastically as those teenage girls from yester-century and pronounced it an excellent choice of music. After that, we shared astonished enjoyment in the Slade-lite strut of ‘Hey Hey Helen’ and sort of vagued out during the cod-reggae of ‘Tropical Loveland’ before coming together to agree that ‘SOS’, when not heard for a decade or two, is a quite spiffing pop song. The descending cascade of the refrain—‘When you’re gone, how can I even try to go on’—is simply pop perfection. What an unexpected delight. 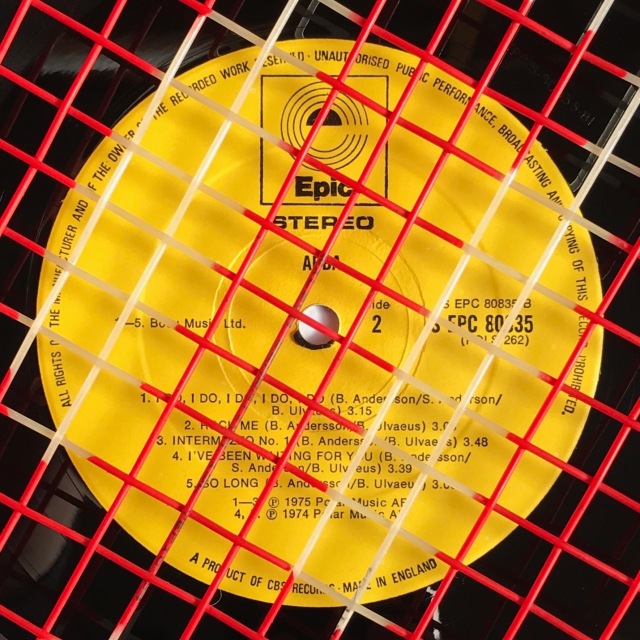 ‘Man in the middle’ is sanitized funk, while ‘Bang-A-Boomerang’, the band’s nod to the early support they received Downunder, is fine (if cringingly ignorant of cultural sensitivity in these enlightened times).

Elsewhere, ‘Rock Me’ does just that in a cheerful rolling radio-friendly way, ‘Intermezzo No.1’ swirls with baroque prog pretensions, while curtain-call ‘So long’ takes us out with rock ’n’ roll pastiche of little depth but well-scrubbed charm.

So I guess you’d say ‘Mission accomplished’. The Gold FM Afternoon delivered fun for Ms C, memories for Mr VC, and more enjoyment than expected. A win-win scenario. Which is more than will transpire tomorrow on the wind-blasted courts of Watsonia Tennis Club. 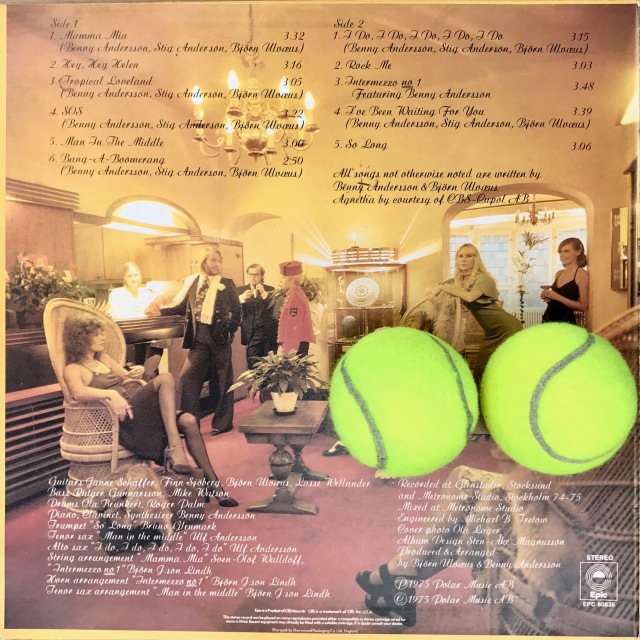