It is revealing that there was more than enough material in the acquisitions book to produce a Top 50 list of secondhand records entering the Vinyl Connection domain during the past twelve months. We are talking fifty highlights, by-the-by, not gap-fillers, pass-markers and also-rans. So much good music and such sustained fervour of vinyl hunter gathering.

What follows is a selection of albums that brought well above average pleasure.

If we’d gone for the epic Top 50 list, my interest in twentieth century composed music and love of jazz would have been apparent. As it is, most of this material is in familiar VC fields; jazz, electronic, prog, rock; five records spanning seven decades. Hope you find something to pique your interest.

Having a couple of collections by the coolest white dude ever to sing and play piano simultaneously (sorry, Elton), I was pleased to pick up this UK Transatlantic pressing of Mose Allison’s 1959 album, made with Addison Farmer (Bass) and Ronnie Free (drums). Licensed from Prestige USA and recorded by Rudy Van Gelder, this copy is not pristine yet is easily good enough to enjoy the under-stated swing of Allison’s playing and his light, laid-back vocal delivery.

It’s odd to reflect that Mose is mostly thought of as a singer of droll, often acerbic songs (‘Stop this world’, for example) yet for the first part of his career he was solidly in the ‘pianist who sings’ category. The cover notes spell it out. Mose ‘is first and foremost, in his own evaluation, a piano player’. Sure, he’s deft and modestly inventive, yet the songs really do spring out at you. ‘Eyesight to the blind’ bounds along with a nod and a wink, while ‘That’s all right’ has has a low-GI world-weariness that makes you wish there were more than three songs on the ten track LP. Fans of his wistful voice and wry delivery would have to wait until 1963’s Mose Allison Sings for an album’s worth of this stylish and unique jazz-blues singer.

Mose Allison died on November 15, 2016, just after his 89th birthday. This review honours his passing and lasting contribution; a legacy far transcending The Who’s demolition of ‘Young man blues’. 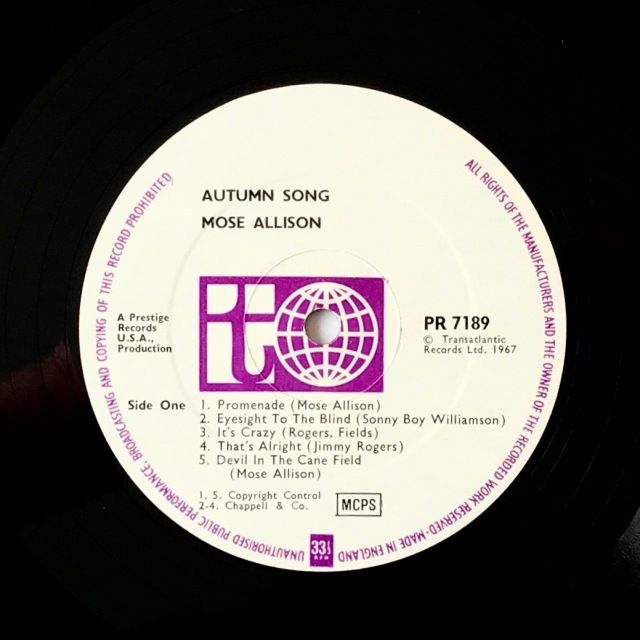 Being known as the group that brought together two rejected members of Yes—Tony Kaye and Peter Banks—was probably never the best marketing tag-line. The band’s first two albums were known for their racy gatefold sleeves; the debut featuring a lady’s nether regions and the second an unclad upper section (nudity, but decorously hair-draped in Lady Godiva approved fashion). You might think that’s two strikes, and perhaps you’d be right, yet Flash (can you now guess the link between name and cover art?) produced an accessible brand of early 70s prog that is interesting, well played, and still enjoyable. I first heard them in the Rowden White Library at Melbourne Uni and liked them, but not enough to spring for the expensive import LPs. For years I had the In The Can (second album) but rarely played it due to a disabling warp. So finding the first two LPs a few weeks ago was one of those record-hunting highs that keep us tragics going.

I’ve been enjoying the debut album a lot. As you’d expect, the guitar (Banks) and keyboards (Kaye) are first rate. So is the bass playing (Ray Bennett). Lead singer Colin Carter has a high tenor voice which occasionally evokes Jon Anderson, just as some of the instrumental sections show Yes influences. Not surprising really—Flash have more justification than most for sounding a lot like their famous brethren.

Most of the songs have extended structures, with inter-related sections and musical development that repays repeated listens and makes the album worth coming back to. Probably my favourite is ‘Children of the universe’ with its gorgeous Tony Kaye synth solo, immediately followed by a Banks guitar solo that briefly quotes ‘Eleanor Rigby’. Then Kaye comes back on organ for a riffing return of the main vocal theme and we’re out with a cheeky guitar coda.

Other than the final slightly wet ballad, this is a terrific debut and one prog fans would enjoy. Probably only the muddy 70s production prevents this from being a fondly admired semi-classic. 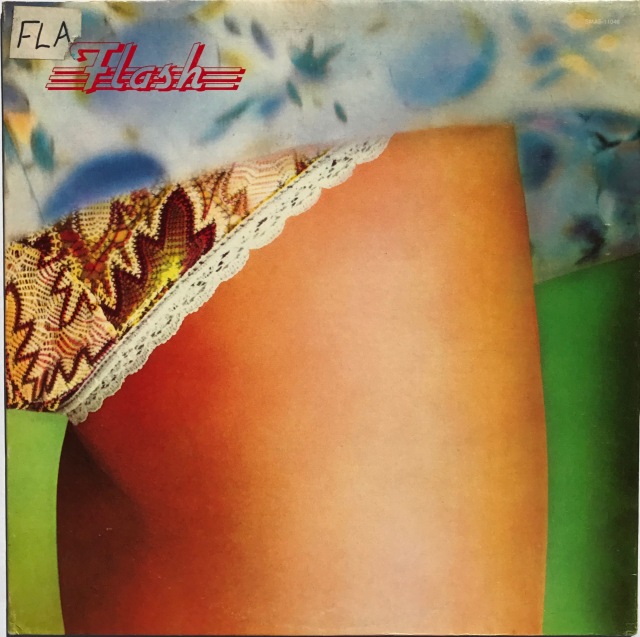 The love round these parts for Herr Froese and his band Tangerine Dream are well known to regular Vinyl Connection readers. This solo album fits nicely with what the band were doing at the time (think Stratosfear) and is a really solid analog electronic album of beauty and invention.

Comprising two seventeen minutes sides, Epsilon in Malaysian Pale (whatever that means) certainly does not outstay its welcome. Side one is the title piece, mysterious in parts, luscious in others, wistfully melodic elsewhere. Halfway through this wander through lush foliage, what sounds like a synthesised aeroplane flies overhead, cueing a subtle change of pace to a more rhythmic, rolling section before we return to the dappled light and sudden avian colour of the jungle for the final section.

‘Maroubra Bay’ (side two) is a real place, but not in Malaysia. In fact it is just east of Sydney Airport. As I know neither the airport nor south-east Asia very well, I cannot comment on how accurate this is as program music, though I can say this is a more brooding, pensive piece closer to Phaedra in its nighttime feel. Classic Froese.

The analogue synthesisers are rich and smooth throughout. The pieces are subdued yet far from static. Sitting in the dark listening to this album is a trip I highly recommend. 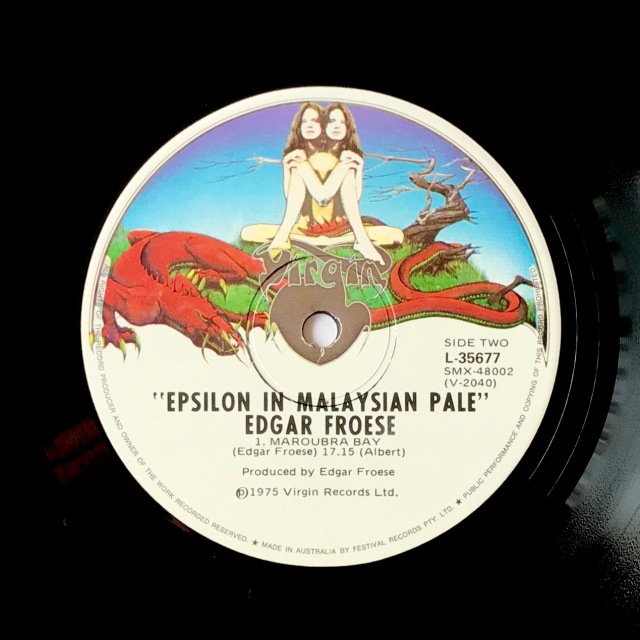 At its best, there is a purity and focus to the rock trio that is exciting and highly energetic. With a trio there is nowhere to run, nowhere to hide. Despite the absence of a bass player, these characteristics are admirably demonstrated on Jeff Beck’s Guitar Shop. Beck teamed up with Zappa alumnus Terry Bozzio on drums and keyboard whiz Tony Hymas (formerly a Jack Bruce sideman) to produce an instrumental album brimming with melody, variety and grunt. The wailing guitar of opening track ‘Guitar Shop’ gives way to the classic rock instrumental ‘Savoy’ before there’s a change down to the reggae-primed ‘Behind the veil’. The latter isn’t at all cringe-worthy as the space provided by Bozzio’s economical rhythms and Hymas’ spare keyboards is delicately filled by the leader. But the name Jeff Beck really means wild guitar played with bravura strength and rock-solid confidence and the album has a satisfying number of tunes in this category. I love the sexy swagger of ‘Big block’ and ‘Stand on it’, which work even better thanks to the evocative pieces such as ‘Two rivers’ and the elegiac ‘Where were you’ which evokes Steve Hackett’s finesse. There is even humour in the treated spoken bits of ‘Day in the house’. ‘Nothing is being done!’ It is, actually, and being done damned well. The UK guitar legend ended the eighties on a high with this rip-roaring album. 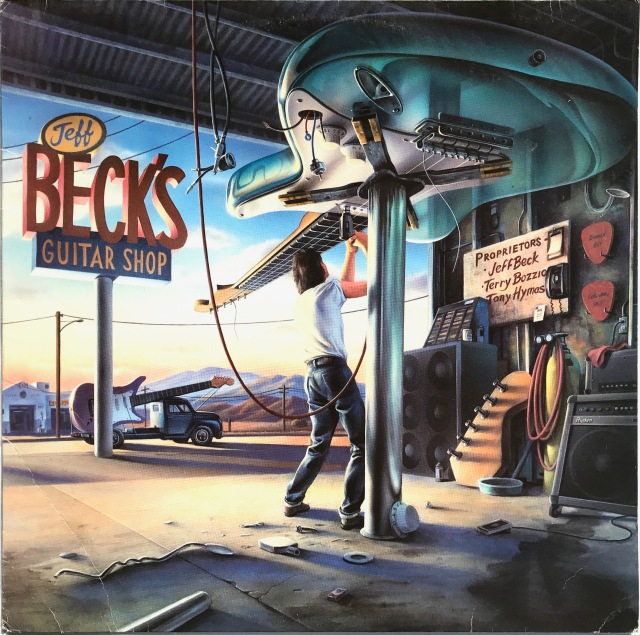 The music of Field Music (doesn’t that read oddly?) has been described as ‘brainy’ and you can tell why. The arrangements are thoughtful and complex, yet deft enough that the songs themselves do not sound pendulous but taught and trim. Tight vocal harmonies enrich many of the songs, which could be described as art-school, 60s tinctured, 70s draped, post-rock flights of fancy. If you can have progressive alt-rock, this is it. Sometimes I think of Super Furry Animals, sometimes a less angsty Radiohead. Brothers David and Peter Brewis have produced a fascinating body of work and I was right chuffed to find a vinyl copy of this, their third album.

Check out a sample here.

Leave a Reply to Victim of the Fury Cancel reply