It has been a very spiritual week here at Vinyl Connection. This, I hasten to observe, has nothing to do with matters of belief, but to the arrival of two albums that explore, in very different ways, the meditative state.

Alice Coltrane founded the Sai Anantam Ashra ashram in 1983 and ran it until she died in 2007. How different it must have been to sing, play, meditate and consider universal profundities in the hilly countryside of Southern California to her years as a pianist, organist, harpist, bandleader and composer in the jazz hotspots of 60s and 70s.

Alice McLeod went to Paris to study with be-bop legend Bud Powell in the late fifties. Already an accomplished musician and performer, she met John Coltrane in the early sixties and went on to release a range of exciting and sometimes challenging jazz albums on Impulse! and other labels.

There is a strong spiritual component to Coltrane’s jazz—just like that of her husband; as Alice reveals in the liner notes, they used to meditate together—so there was flow and continuity when she converted to Hinduism and founded a centre for the study of Eastern spirituality in 1975, marking a withdrawal from performance and recording.

Between 1982 and 1995, Alice Coltrane privately released four cassettes of keyboard accompanied chants. They were for followers and members of the ashram and were never commercially released… until now.

It is quite a title, and quite a record too. Radiating from the grooves is a deep and joyous spirituality (note lower case); a sense of devotion coupled with humanity. The voices—often massed, but also supporting soaring solos—are not those of a classically trained choir, but of a group of people communing through chant and song. If you want to join in, the lyrics included, as are essays on the ashram and the recordings, yet this doesn’t seem like music to study, rather to float upon and…

And what? Meditate, contemplate, reflect, dream, hibernate, relax, drift, commune with the universe.

This is no album of inaccessible eastern alienness. There is blues wailing, churchy organ, some Arabic scales, Baptist cadences. Yet, for those born and raised in the urban west, there remains an exotic otherness, somehow captured in the synthesiser swells and organ bass pedal drones of Coltrane’s subtle accompaniments. There’s even some harp.

The human voice is the core of this music, yet somehow it manages to transcend earthly bounds. Stretch out on a yoga mat with the lights dimmed and a glass of sparkling wine within arm’s reach and take a trip to the astral plane. Or, putting it another way (courtesy of Marc Cohn’s iconic lyric from “Walking in Memphis”),

The Ecstatic Music of Alice Coltrane Turiyasangitananda was released in May 2017 on the Luaka Bop label. It is available on CD or double vinyl. I imagine you could download it too, if that’s your thing. 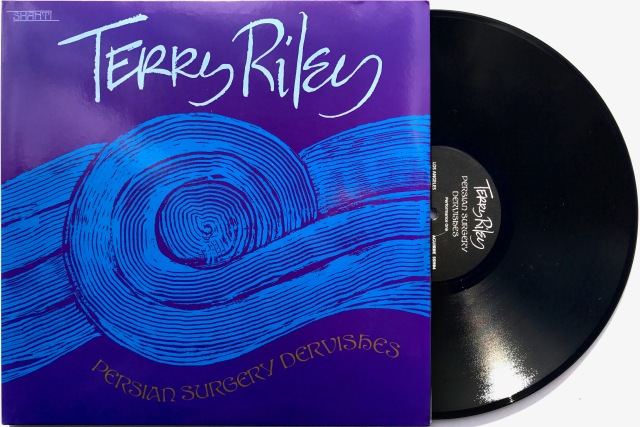 Although minimalist composer Terry Riley is best known for one of his early recordings—Rainbow in Curved Air, featured at Vinyl Connection here—his career has spanned six decades. It is truly awe-inspiring to scroll down a discography (or several discographies—there is some inconsistency) listing a first recording in 1963 and the most recent in 2016.

A fan of John Coltrane (and in all probability his wife) and an active co-creator with La Monte Young, Riley also studied voice with Hindustani Master Pandit Pran Nath. Yet he was a determined individualist, liking the simplicity (and control) of solo performance.

The two concerts included in this 1972 release (recently re-issued on double vinyl) give as close to the live experience of a Terry Riley concert as we can possible get four-and-a-half decades later.

The set up is simple. Riley, his small organ, and what the liner notes call ‘Time-Lag feedback’, a tape deck that allows ‘layering, looping and phasing effects’. The themes are more textual than melodic, more swirling than linear. The sound is simultaneously complex and simple, and endlessly hypnotic.

Disc one, recorded in Los Angeles in April 1971, starts ruminatively, deep notes and runs with a subterranean growl. Something powerfully elemental is stirring. Slowly, the music migrates—emerges?—into the middle register, as with imperceptible increase in tempo, the energy builds. There’s a sense of something unfurling, growing, stretching.

As it travels the spaceways, the music dances between repetitive drones, upper register trills and mind-altering mash-ups of the two.

The second concert—Paris, May 1972—has the same genetics, but quite a different personality. It begins, for example in the upper middle register with a repetitive organ sequence that could surely have come from a Tangerine Dream album of the time.

One of the early variations explores a melody that evokes Bo Hansson’s Lord of the Rings, mysterious and folky. The next segment is questing, tentative… so much variety from this simple palette.

The second half of the second concert is faster, more urgent, with flurries of swirling arpeggios over hiccupy bass figures, though no pattern lasts particularly long. You listen, drift, return, and find yourself in a landscape both the same and subtly different from where you thought you were.

Having never, even at kindergarten, had the flexibility to sit cross-legged for more than a few minutes, it’s unlikely that I’ll ever sustain a meditative posture long enough to achieve the enlightenment this mesmerizing music promises. But I truly believe if I could arrange my limbs in the classic pose for any length of time, I would be observed levitating several inches off the ground by the end of each of these Sibylline discs.

Persian Surgery Dervishes was reissued on vinyl by Aguirre Records, mid-2017. There is also a 2-CD set on New Tone Records (Italy).