I always swear I will never buy another compilation album. I will ignore Various Artists, shun themed collections, eschew curated histories. I have enough. More than enough.

So how come this section of the Vinyl Connection Collection still manages to grow?

Today’s Curiosity Corner will give you an idea. There I was, getting to the end of the alphabetical section at one of my favourite stores and sheer browsing momentum carried me over into the Various Artists section. I wasn’t me, it was physics.

I was flipping those LP pretty damn rapidly, let me tell you ( v for velocity). And my personal mass (m) has swelled recently due to lack of exercise and an increase in consumption of chocolate covered treats (and wine). So you can well believe that the p was substantial. Enough to get me through the VA bin at a coast.

And what did I find there, but an album sponsored by a confectionary company. More than that, a particular candy bar. Crunchie Presents…  How could anyone resist?

But wait. When I slid out the record it turns out to be on honey coloured vinyl. Not yellow, or gold-ish, but a genuine red-hot stab at a honeycomb LP, with faint flecks throughout and a golden texture so mouth-watering it made you want to eat it. Or at least buy it, which I promptly did for the princely sum of eight Aussie dollars. Absolute bargain, if you ask me.

To be honest, I would probably never have played it (or perhaps even purchased it) without this very blog. Buying to blog, eh? Haven’t heard that excuse in a while.

So let’s pig out on Crunchie hits, with each track getting a rating in Bars (that’s mini-chocolate bars, of course).

Excellent choice of opening cut. This song was big on the old transistorised airways back in 1979. Strong opener. Always loved the album title Bombs Away Dream Babies. Stewart died in 2008 at aged 68.

Aussie icon of the 70s, having played Judas in JC Superstar. Kind of funky disco-ish song with ordinary verses but a catchy chorus. English died a few weeks before his 67th birthday in 2016. Is everyone on this album dead from sugar-related illnesses, I wonder?

I recall this, the UK band’s only hit. Nice hook in the chorus and slightly interesting song construction. Amusing lyric:

You’ll be amazed to see the people

Who you thought so swell

Tipping back the moselle

And life is so hard on a credit card

Amusing 10cc-ish ditty about what happens when the English encounter solar energy. Would have been a solid 3 Bars except for the skin cancer penalty.

Track two from Dire Straits debut album has a gentle calypso flavour and some nice slide from Mark Knopfler. A pleasant summery feel, if a bit lightweight.

Never heard of this US singer-songwriter. Wiki tells me this was his only hit. Reminds me of Bread. Bland.

I Love The NIghtlife—Alicia Bridges

This was a hit for Ms Bridges in 1978. Disco with a country twang? Not memorable. Factoid: Alicia was plagued for several years by the occasional appearance of an imposter, masquerading as the singer at various events, including a country music convention. The Real Ms Bridges gave evidence—presumably that she was herself—at a subsequent trial.

I was not in the demographic for this song at the time (disco), and am not really part of the flow of it’s enduring anthem status thereafter. Still, a generous score for survival and creative re-purposing is indicated.

These guys again? They must have bought shares in Cadbury. This 1978 hit sounds like a rip-off of the Bee Gees “You Should Be Dancing”. Quite like the instrumental break-down in the middle of the song.

This single hit #1 on the UK Chart in late ’78, apparently the first ‘punk, new wave’ song to do so. I don’t know it at all, but enjoyed this first exposure. Probably the only track here with a bit of edge. And a bit of brass (How punk!).

A creditable cover of the early Steely Dan song. New Zealand born Max and his band The Meteors had several huge Downunder hits in the mid-70s. This one from ’79 didn’t do much, maybe because it is a bit too balladified.

Hello, this Is Joannie—Paul Evans

Oh, fuck, it’s another of those awful “Living next door to Alice” story ballads. I’m leaving the room and will be back when Eric arrives.

Backless was not a Clapton album I ever thought much of. Kind of anodyne. “Promises” was the single and did OK. As a song it’s OK too, in a kind of sub-JJ Cale kind of way.

The UK born Aussie singer returns for Crunchie’s final bite. This folk song was the theme for an enormously popular period TV mini-series in which English also starred. The album was credited to Jon and Mario Milo of Aussie symphonic prog band Sebastian Hardie. A ubiquitous hit in Aus, yet having not heard it for years, enjoyable.

Having got through 16 songs and almost as many mini-Crunchies, I’m not in any fit state to tabulate the scores. I’ll loan you a calculator if you want to do the math.

Oh, and you know those flecks? I think they were either scuffs or evidence that 70s coloured vinyl was utter crap. Or perhaps honeycomb in the grooves. Whatever the explanation, Cadbury Crunchie came with a generous serving of surface noise. If I’d known, I probably would have put it back. 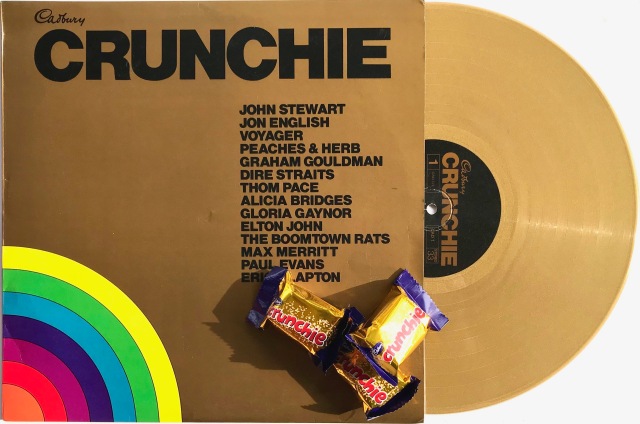 Love some of these songs to death?  Got your own confectionary themed compilation? Do share.