The quest to unearth further 60s vertical gatefold album covers produced many nominations of 70s covers that do indeed open up in ‘portrait’ format, but only one addition from Sixties-land.

The LP was the third Deep Purple release, their self-titled record from 1969. Many thanks to Arterrorist for the reminder. I say that because the CD is on the shelves—indeed, is playing as I write—yet nowhere in the extensive and informative booklet is there an image of the full cover. 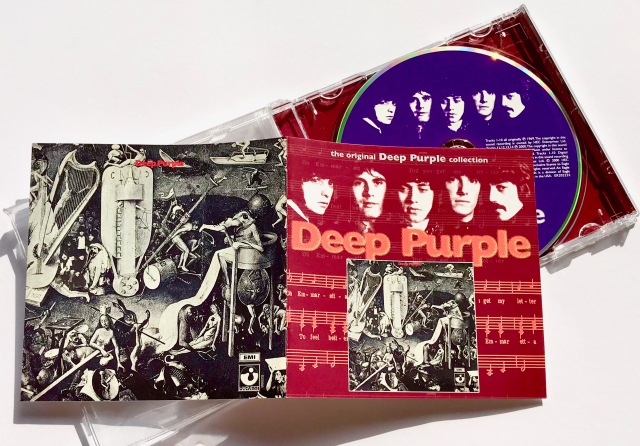 And what a cover it is! A detail from the right hand panel of the famous Hieronymus Bosch triptych The Garden of Earthly Delights (painted somewhere between 1490 and 1510), the gatefold sleeve was meant to be in colour (that is, a reproduction of part of the painting now housed in Madrid’s Museo del Prado) but due to a “mix up” appeared in monochrome. 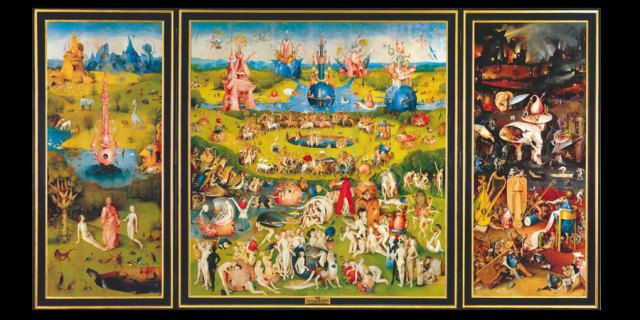 Even so, some squeamish retailers refused to stock it. 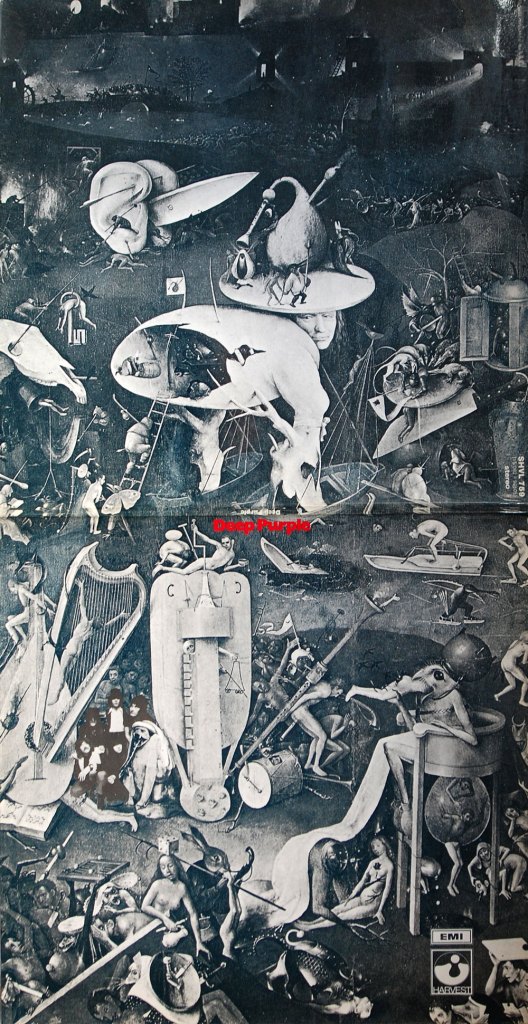 As for the music, I’m rather fond of Deep Purple Mark I. Original singer Rod Evans doesn’t do the high-tension electrocution of Ian Gillian, but he’s a fine vocalist. Opening cut “Chasing Shadows” has a stomping African feel (almost like a prototype ‘Space truckin’’) and jabs of Jon Lord organ. “Blind” is a fine harpsichord-tinged mid-paced song that highlights Evans terrific voice. About now it occurs to you that even someone who is averse to the later Purple sound could really enjoy this album. When Ritchie Blackmore drops a neat wah-wah guitar solo then throws it back to Lord for another harpsichord flourish, it really is rather marvellous.

The cover of Donovan’s ‘Lalena’ is pretty but pretty forgettable other than for Lord’s jazzy organ, but then comes my favourite part. A glorious psychedelic instrumental introduction (‘Fault line’) segues into ‘The Painter’, which really does sound like Deep Purple! Powerful rhythm, great guitar, fine vocal, riffing organ…it’s a wonderful five-and-a-half minutes that beautifully illustrates how psychedelia morphed into progressive rock. Because that’s what Deep Purple did in the late sixties. Believe it or be consigned to Bosch’s hell.

Although ‘Why didn’t Rosemary’ is a basic plodding blues, before leaving Deep Purple, mention must be made of the final two tracks. ‘Bird has flown’ is a stomping original that again melds two moods. Here psychedelic touches rub up against hard-rocking riffage, and it works a treat!  A very progy twelve minutes long, ‘April’ opens with church organ and acoustic guitar before going on an extended electro-acoustic journey of great pastoral beauty. Not everyone will enjoy the pseudo-classical arrangement, but hang in there; it rocks up most agreeably at the nine minute mark to create a multi-section opus that probably had young Genesis pricking up their ears. In summary: a back-catalogue album worth checking out. [The 2000 CD remaster also has a generous handful of bonus tracks]

So, on with the vertical album cover show!

First up we have the Moody Blues fourth album, A Question Of Balance (1970). Embodying something of the pretensions of their lyrical concerns, the cover painting (by Phil Travers) is an intriguing collage of images that has a certain cosmic grandeur. 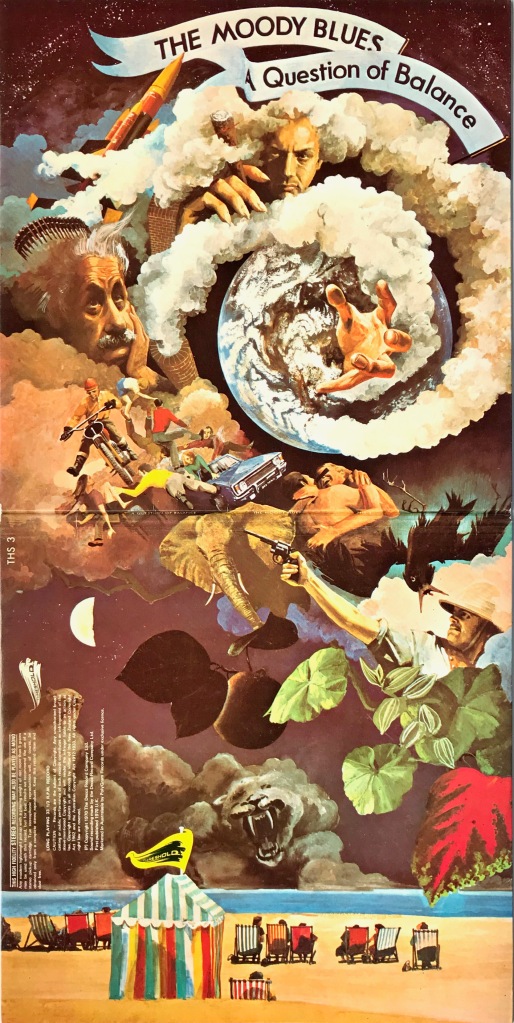 Grand in a different way is the 1970 album by The Flock (remembered chiefly these days as the first appearance of violinist Jerry Goodman, who went on to be part of the Mahavishnu Orchestra). My copy of Dinosaur Swamps is not the gatefold version, and I would not have known about this panoramic primordial painting if not for Arterrorist (see comments under previous post).

A completely different world is evoked by Funkadelic’s Cosmic Slop (1973). Owing something to the urban cartoons adorning Miles Davis albums of this era, this Pedro Bell painting also seems to nod towards The Garden of Earthly Delights with disturbing lascivious images and hybrid creatures.

Lastly, we need to get this classic in somewhere. It was my first Pink Floyd album, purchased second-hand in 1973 (two years after its release). Probably I’m the only dill in the entire world who took months to work out what the image actually was, due to never actually opening up the gatefold for the full 12” x 24” experience. The band designed the cover, by the way, with the outer photos being taken by Bob Dowling. 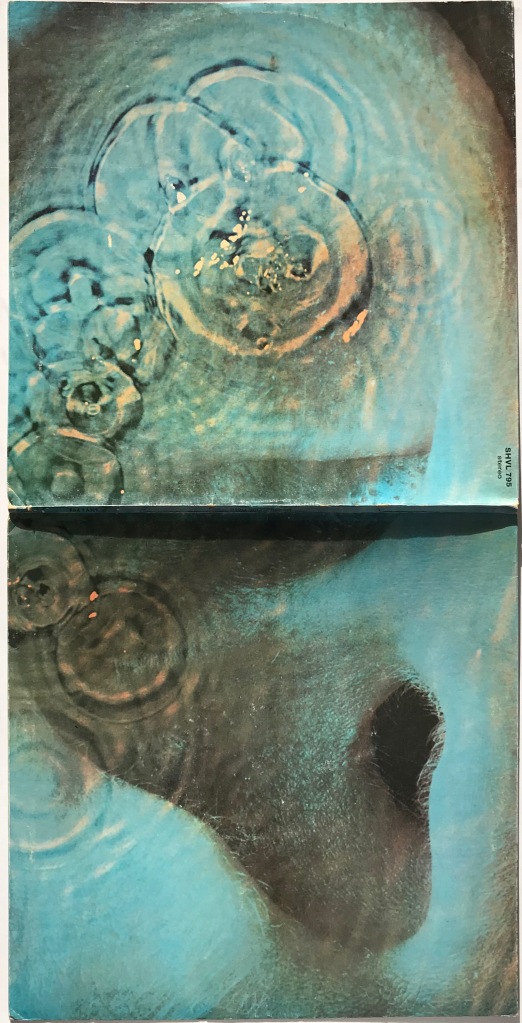 NEXT: More vertical covers plus one album review! 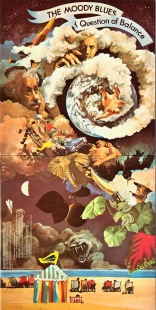 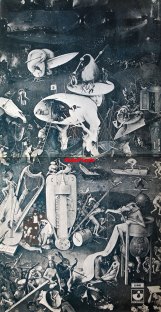